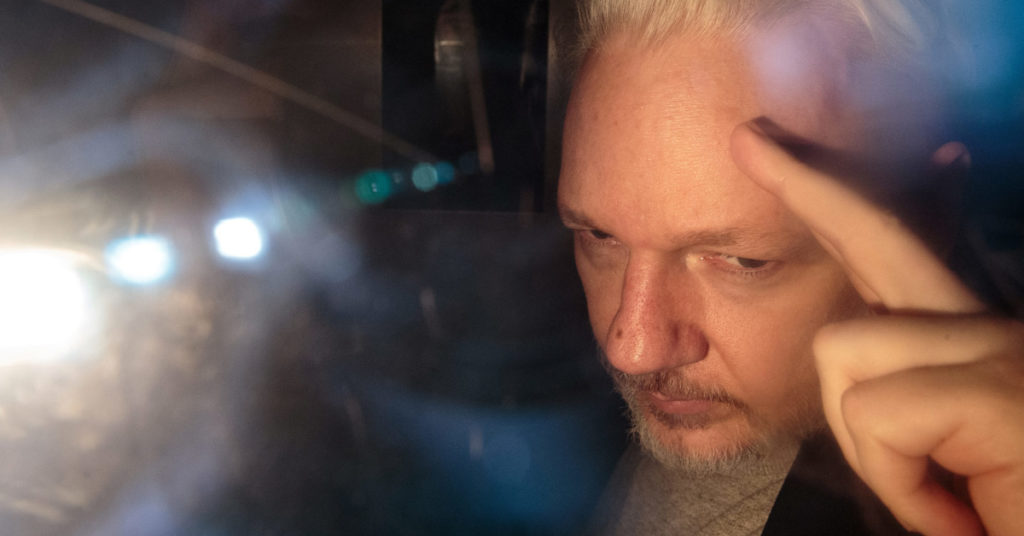 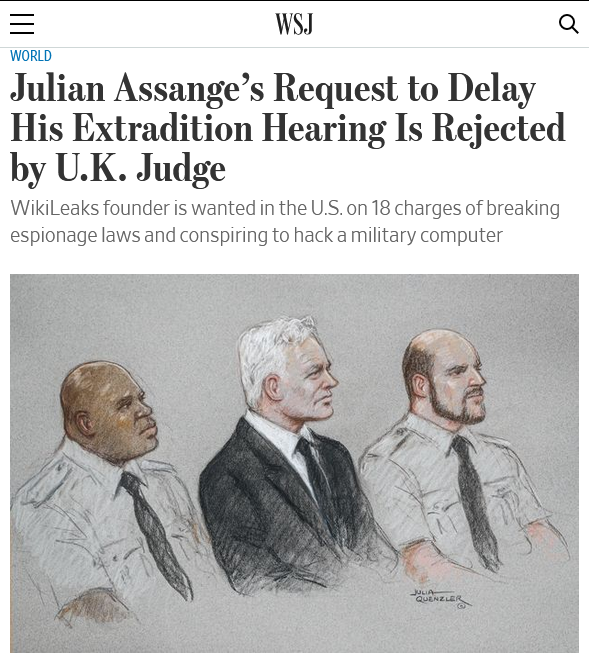 The Wall Street Journal (9/7/20) reported that WikiLeaks published “a huge trove of classified material that painted a bleak picture of the American campaigns in Iraq and Afghanistan.”

US corporate media have buried coverage of WikiLeaks founder Julian Assange’s extradition hearing in the UK, despite its being the media “Trial of the Century” (FAIR.org, 9/25/20). But even in the scarce coverage that does exist of this unprecedented case with immense implications for freedom of expression, one would hardly get the impression that the US and British governments are involved in an illegal conspiracy—in violation of their own laws—to punish Assange for the “crime” of journalism.

Coverage before and at the start of the trial by establishment media outlets like the New York Times (9/7/20), Wall Street Journal (9/7/20), USA Today (9/6/20) and the Associated Press (9/6/20) largely omitted simple facts, like Assange displaying signs of abuse. Of these reports, only USA Today cited Nils Melzer, a UN special rapporteur on torture, who observed that when he visited him last year, Assange displayed symptoms of “psychological torture,” likely caused by extreme stress, chronic anxiety and isolation.

AP framed Assange’s visible and prolonged abuse at the Belmarsh maximum security prison in London and the Ecuadorian embassy—where he sought asylum for seven years—in a partisan way, presenting it as a charge of his “supporters” rather than the judgment of professionals:

Supporters say the ordeal has harmed Assange’s physical and mental health, leaving him with depression, dental problems and a serious shoulder ailment.

In fact, Melzer’s assessment is corroborated by other experts. The Lancet (2/17/20) published an open letter by 117 doctors and psychologists calling for the end to what they called the “torture and medical neglect of Julian Assange.” Dr. Sondra Crosby, one of the first doctors to independently examine Guantánamo captives, who possesses extensive experience treating torture victims around the world, later testified at Assange’s hearing that he met “all of criteria for major depression,” and is at “high risk of completing suicide if he were to be extradited” to the US (Shadowproof, 9/24/20).

Torture and arbitrary detention are human rights violations of international conventions that both the US and Britain have signed, which obligates them to conduct prompt and impartial investigations whenever there are reasonable grounds to believe someone has been and is being tortured. In Assange’s case, these violations have been downplayed or even celebrated by US and British media (FAIR.org, 4/18/19). AP (9/22/20) reported on psychiatric expert Michael Kopelman of King’s College London testifying to Assange’s “intense suicidal preoccupation” and “auditory hallucinations,” without once noting the obvious connection to psychological torture.

Another human right enshrined in international conventions and in US and British domestic law is the right to a fair trial, which is precisely what has been and is currently being denied to Assange, although one wouldn’t know this from corporate media coverage. Establishment media omitted, for example, that Assange was sent to these hearings by a judge who ruled on his case despite having several undisclosed conflicts of interest. 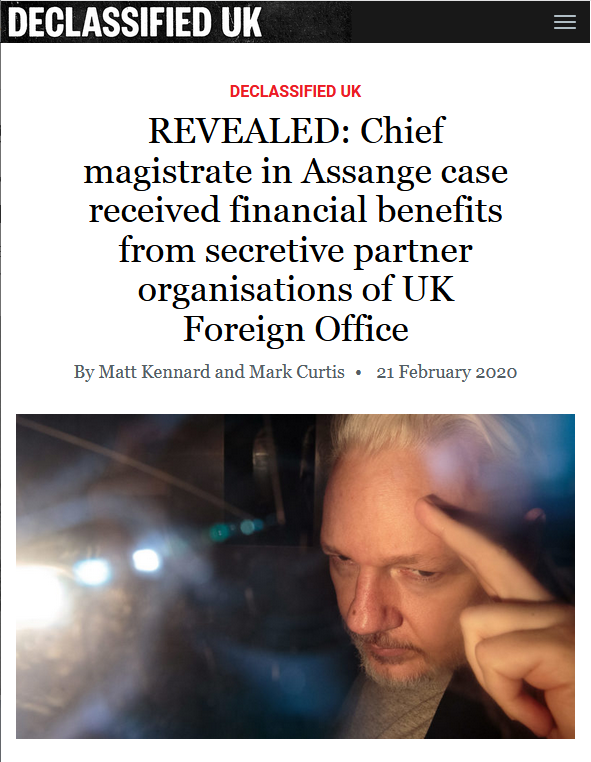 Before the hearing, journalists Matt Kennard and Mark Curtis of Declassified UK published several damning reports revealing that Emma Arbuthnot—the chief magistrate who had previously overseen Assange’s extradition proceedings before informally stepping aside in December, 2019 for “perception of bias”—had failed to disclose several conflicts of interest before delivering two rulings that prevented Assange from taking up asylum in Ecuador. Kennard and Curtis (11/14/19) reported that Arbuthnot had been receiving gifts and hospitality from Bechtel, a US military and cybersecurity company that had been exposed by WikiLeaks.

She has also taken part in junkets, along with her husband, paid for by two partner organizations of the British Foreign Office, which has long taken an anti-Assange position (Declassified UK, 2/21/20). (Her husband, James Arbuthnot, is a former Conservative Defense minister who has also worked closely with the neoconservative Henry Jackson Society—Declassified UK, 9/4/20). One of the junkets involved a meeting between James Arbuthnot and Turkish Energy Minister Berat Albayrak—the son-in-law of President Recep Tayyip Erdoğan—whose personal emails were published by WikiLeaks.

Arbuthnot’s son, Alexander Arbuthnot, is the vice president of Vitruvian Partners, a private equity firm heavily invested in Darktrace—a company founded by GCHQ and MI5 to stop data leaks, which is staffed by veterans of the NSA and CIA, intelligence agencies behind the US government’s persecution of Assange (Declassified UK, 11/15/19).

Although UK legal guidance requires British judges to declare any conflicts of interest before the courts, Arbuthnot has a history of stepping aside from adjudicating cases only after media investigations expose them. Because she refused to disclose her conflicts of interest and only informally stepped away from Assange’s case, her previous rulings in February 2018 and June 2019—which brought Assange to his extradition hearings in 2020—couldn’t be revisited by his defense. Although she is no longer personally hearing Assange’s extradition proceedings, she remains the chief magistrate, and is still responsible for supporting and guiding the junior judges in her jurisdiction, like Judge Vanessa Baraitser, who presided over Assange’s extradition hearings and is responsible for delivering her verdict on January 4, 2021. 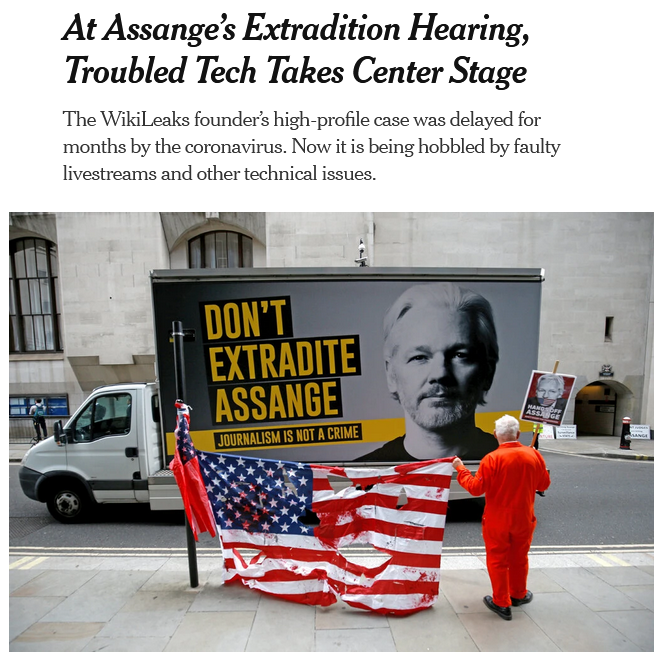 The New York Times (9/16/20) found the technical difficulties one of the more interesting things about the Assange hearings.

But can any of this scandalous information make it through the filters of US media? Aside from trivial reporting that focused on technical “glitches” on the first day of the hearing (New York Times, 9/16/20; Washington Post, 9/7/20), the media blackout from establishment outlets like the Times, Post, Journal, USA Today and CNN has largely forced US audiences to rely on reprinted AP reports to get any idea of what was going on during the trial.

To AP’s credit, it has covered important topics that other US outlets have ignored, such as US whistleblower Daniel Ellsberg’s defense of Assange (9/16/20), and testimony confirming that the US prosecution was lying when it claimed Assange wouldn’t be held in solitary confinement if he were to be extradited (9/29/20). It also covered crucial testimony from whistleblowers at the Spanish security firm UC Global, revealing that for their “American friends,” the firm had covertly installed in the Ecuadorian embassy microphones, cameras and special stickers that disrupt white noise machines (9/30/20).

As British media watchdog Media Lens (10/7/20) pointed out in its critique of the British media blackout, the mere fact that Assange’s confidential conversations with his lawyers had been violated under the auspices of the CIA “should have been sufficient to throw out any court case against Assange.” Journalist Kevin Gosztola (Shadowproof, 10/3/20) later reported that in the UK, the FBI had enlisted the Ecuadorian government’s help in stealing legally privileged material from Assange’s lawyers, which made it more difficult for his lawyers to prepare a defense for his extradition hearing.

However, when it came to the substance of what was actually argued by both the defense and prosecution, and the case’s evolving implications for the future of journalism, even the AP joined in the atrocious US media blackout. Without indispensable coverage from outlets like Shadowproof, Consortium News and former UK ambassador Craig Murray’s blog updates, one wouldn’t know that the prosecution had shifted its arguments from the claim that Assange isn’t a journalist—making a specious distinction between his behavior and those of other media professionals—to asserting the US government’s “right” to prosecute, under the 1917 Espionage Act, all journalists around the world who publish classified US information. These new US government charges could criminalize even receiving classified information, which is standard practice in journalism.

The prosecution was forced to do this because their unsubstantiated arguments collapsed under their own lies, such as when they falsely charged Assange with aiding whistleblower Chelsea Manning in a “conspiracy to commit computer intrusion,” or that WikiLeaks disclosures resulted in material harm, in order to dodge claims that the trial is politically motivated (Shadowproof, 9/26/20; Independent, 10/5/20).

At other times, AP reports focused on relatively trivial matters compared to reports by other observers at the extradition hearings. For example, AP (9/8/20) published an article focusing on Judge Baraitser instructing Assange to stop interrupting witnesses. On that same day, Craig Murray (9/8/20) reported on Baraitser’s blatantly inappropriate practice of reciting pre-written judgments prepared before she heard any lawyers argue their case in front of her, and preventing the defense from having adequate time to prepare for superseding indictments and present their case in court. Eyewitnesses to the trial, like Australian journalist John Pilger (Arena, 10/2/20), described it less as due process and more as “due revenge.”

AP, and corporate US news outlets more generally, never followed up on Consortium News’ revelation (9/28/20) that the US government’s lawyers had been relying not on actual witnesses but on a 2011 book by two Guardian journalists, Luke Harding and David Leigh, who are known to be hostile to Assange. Neither of them have been called to give evidence under oath about the contents of their book, which would require them to be cross-examined by Assange’s lawyers. Yet when the defense called former Der Spiegel journalist John Goetz to give evidence under oath refuting the book’s claim that Assange had remarked that informants deserved to die—a comment supposedly made at a dinner Goetz attended—Baraitser sided with the prosecution to prevent Goetz from giving firsthand testimony about the allegation (Consortium News, 9/16/20).

From top to bottom, the trial itself is a farce, since no one should be prosecuted for working with a whistleblower to expose war crimes, yet there are few reports questioning its legitimacy (FAIR.org, 4/12/19). On the contrary, it appears that major US news organizations have buried all the ways that the US and UK governments have already stacked the deck against Assange, in order to give the illusion that he’s receiving a fair trial.