Yesterday CNN said that the US is considering sending warships to the Black Sea amid Russia-Ukraine tensions. That the U.S. is ‘considering’ this is however disinformation:

The United States has notified Turkey that it intends to deploy two warships to the Black Sea amid rising tensions with Russia, Turkish Foreign Ministry sources said on Friday.

Washington made the notification just over two weeks ago, as required under the Montreux Convention on passage through the Straits.

The warships will stay in the Black Sea until 5 May.

“One US warship will arrive on 14 April, and another on 15 April to the Black Sea. And they will leave on 4 May and 5 May, respectively,” a source in the Turkish Foreign Ministry said.

The tensions in the Ukraine have built up after the Ukraine transferred heavy forces to the borders of Donetsk and Luhansk, raised Nazi flags and made a lot of noise about reconquering the renegade provinces as well as Crimea. 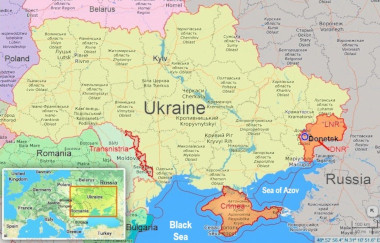 Russia has also started some movement of troops and equipment towards its western border. For now these units are just training and not in a position to attack:

Although the US does not see the amassing of Russian forces as posturing for an offensive action, the official told CNN that “if something changes we will be ready to respond.” Their current assessment is that the Russians are conducting training and exercises and intelligence has not indicated military orders for further action, the official said, but noted that they are well-aware that could change at any time.

A few weeks ago we explained why the Ukrainian president Zelinsky is under pressure to start a war. The country is bankrupt and in a constitutional crisis. On top of that:

Polling numbers for Zelensky have sharply declined. Right wing city councils call on Zelensky to outlaw the largest opposition party. Meanwhile the pandemic puts a record number of people into hospitals while a meager vaccination campaign is failing.

A war against the eastern separatist could be a Hail Mary attempt by Zelensky to regain some national and international support.

But nothing will happen on the frontline without the consent or even encouragement from Washington DC. The Biden administration is filled with the same delusional people who managed the 2014 coup in Kiev. They may believe that the NATO training the Ukrainian army received and the weapons the U.S. delivered are sufficient to defeat the separatist. But the state of the Ukrainian military is worse than one might think and the separatist will have Russia’s full backing. There is no question who would win in such a fight.

Russia has since made its position clear:

Russia will be forced to protect the residents of Donbass if Ukraine launches full-scale hostilities against the region. That’s according to Dmitry Kozak, President Vladimir Putin’s deputy chief of staff, who is himself Ukrainian.

Russia is making such noise to deter Zelensky from any stupid moves. It is however not clear if this will deter Washington DC from ordering Zelensky to attack. The Ukrainian president recently was in Qatar to ask for money. He will soon (again) be in Istanbul to request more drones and likely also ‘Syrian rebels’ to be used as cannon fodder in the opening of a war.

The weather is not yet optimal to launch an attack. The grounds are still soggy and would hinder heavy weapon movements. The chance for war will increase towards the beginning of May.

But all depends on Washington. Will the Biden administration push Zelensky towards a war that would certainly end with the Ukraine’s defeat and dissolution? Why would it do so?

Andrei Martyanov suggests a U.S. geo-strategic motive behind this:

[T]o convince those 447 million EU’s residents that they need America’s protection and weapons, America needs Russia to get into the war in Ukraine and if it will end up with utter destruction, and it will if Russia really decides so, of the Ukrainian Armed Forces and, likely, Ukrainian statehood, so be it.

Americans never really cared how many aborigines die, as long as it works for the US bottom line. Or, if one may, a condition of American condition, which is deteriorating steadily because not only the United States increasingly has very little of substance, that is of high value added, to sell to the world, but forming economic and military monster of Eurasia removes the United States from its, grossly exaggerated to start with, self-proclaimed status of global hegemon to the status of, at best, one of the few big shots on the planet.

The United States cannot allow this consolidation of the market to happen and the loss of Europe, Washington’s thinking goes, is tantamount to capitulation. So, the United States must hold on to EU, or whatever it will become once EU inevitably collapses, and NATO remains the only tool to drive European weaklings into submission. Making Russia obliterate Ukrainian Armed Forces is a perfect way to scare Europeans into abandoning any attempts to economically compete with the United States and deny them access to Russia’s energy.

Could that really be the U.S. strategy? If so it is rather short term thinking. How long would the new situation of Europe as a U.S. protectorate hold. Five years? A decade?

Moreover as a strategy it is rather poorly thought out and I have yet to detect any serious thought behind most U.S. policies.

Then again – the neo-conservatives in the Biden administration, like Victoria Nuland who is nominated as Under Secretary of State for Political Affairs, are not known for long term strategic thinking but for ruthless activism. They might want to create chaos in Europe without giving much thought to the aftermath.

One thought on “Why The U.S. Might Want War In Ukraine”