The lawyers who led the nationwide U.S. Roundup litigation through three trial victories and forced Monsanto owner Bayer AG into an $11 billion settlement have notified a federal court that they have uncovered evidence of fraud in a secret deal between Monsanto and a lone plaintiff’s lawyer who has not been active in the litigation until recently.

In a series of filings made last Thursday, lawyers from three firms involved in the three successful Roundup trials alerted the court to what they said was an effort by Monsanto to “buy” a favorable appellate court ruling in a “pay-to-appeal scheme.”

Monsanto’s owner Bayer and the lawyer involved have denied the allegations. Read the details and see the court documents at U.S. Right to Know.

Monsanto has lost all appeals associated with the first case that went to trial, Johnson v. Monsanto, and has appeals pending in the two subsequent trials it lost. Juries found the company’s glyphosate-based weed killers such as Roundup caused non-Hodgkin lymphoma suffered by plaintiffs, and that Monsanto failed to warn of the risks.

Long lasting health impacts of DDT: A new research report shows health problems linked to the long-banned insecticide DDT have persisted across at least three generations, affecting even the granddaughters of women exposed to the chemical in the 1960s. See Carey Gillam’s reporting in Sierra Magazine.

The study’s author warns that we are “flooding the world” with chemicals that may have the capacity to cause harm for many years down the road, and not devoting enough research funding to track the impacts.

More Right to Know news in case you missed it …

How the food industry shapes the principles of science: The food industry has been trying to revise the standards and principles by which science is conducted, in ways that benefit industry, such as by promoting the acceptance of public-private partnerships and permissiveness about conflicts of interest, according to a new study coauthored by Gary Ruskin of USRTK.

See the new study in Globalization and Health and read our press release for details.

Meet the censored by Google (us): Matt Taibbi reported earlier this month on how web traffic at usrtk.org plunged after a Google algorithm update. Why? Google won’t say and there is no way to find out.

Groups like U.S. Right to Know, Taibbi reports, are “particularly vulnerable in the age of algorithmic moderation, as computers don’t easily distinguish between conspiracy theory and legitimate reporting that runs counter to present accepted narratives.” Read the article here. 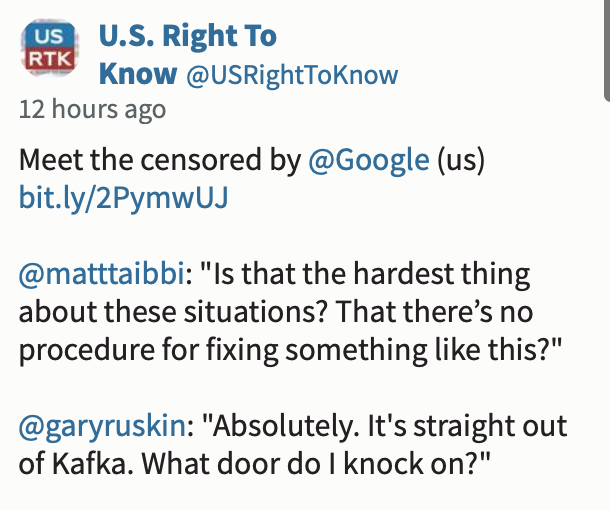 For our right to know,
Carey, Gary, Sai, Stacy