Today they took the center of Baghlan, a city north of Kabul with some 150,000 inhabitants.

Old #Baghlan town fell to #Taliban after surrender of 100 cops and soldiers. Local account reports that remaining troops are besieged in new part of the city
#Afghanistan

The above thread and this one include several videos showing the Taliban moving freely around and inspecting captured Humvee’s and weapons.

#BREAKING
#Baghlan : The Taliban captured Shahr-i-Kohna (the old bazaar) of Baghlan and surrendered about 200 soldiers with weapons and ammunition.
#Afghanistan #Taliban #Alfath @QariYunusRashid

The city and Baghlan province, marked in pink on the map below, are on the road from Kabul to Tajikistan. This is one of the few ‘escape routes’ towards a safe country. 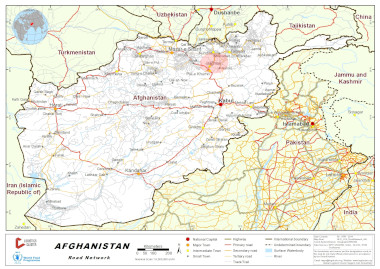 That 200 government police and troops laid down their weapons – other reports even say they changed sides – points to the immense fragility of the Afghan forces. Nearly twenty years of U.S. ‘training’ has had little effect.

Ghazni, south of Kabul, is also under attack and may soon fall to the Taliban.

Yesterday the U.S. launched airstrikes on the southern province Helmand where the Taliban are besieging the province capital Lashkar Gah:

Officially, the US is presenting this as “support of Afghan national security forces.”

This is a particularly surprising time for such a move, as it comes just a day after the US transferred the Helmand Post to the Afghan Army. The Afghan military was fighting the Taliban in several provinces, including Helmand, but the US was not involved. Conspicuously, as part of the ongoing talks the Taliban had not been attacking the US forces, seemingly trying to avoid starting up a big fight as deals near for a pullout.

The US clearly is less concerned with avoiding lengthening the war, as having taken the provocative step of reneging on the May 1 pullout date, they are now attacking Taliban targets outright, which certainly isn’t going to lend credence to the idea that they are willing to pull their small remnant force from Afghanistan in just two more months.

The U.S. and other foreign troops could have moved out peacefully if the Biden administration had stuck to the May 1 deadline that had been agreed upon between the Trump administration and the Taliban. It instead dithered for three months before deciding that it was really time to finally leave Afghanistan.

Still, many in the Pentagon and CIA do not like the idea and they will do their best to sabotage the retreat by provoking new Taliban attacks on U.S. forces. The White House should demand more discipline from the Pentagon and prohibit airstrikes and other interventions.

The U.S. should move out as fast as possible, let the inevitable happen, and forget about further interference.