An anti-militaristic spectre is haunting Europe: trade unions, social movements and political organizations are mobilizing against war and against the next NATO summit in Brussels.

by European Secretariat of the International Peoples’ Assembly 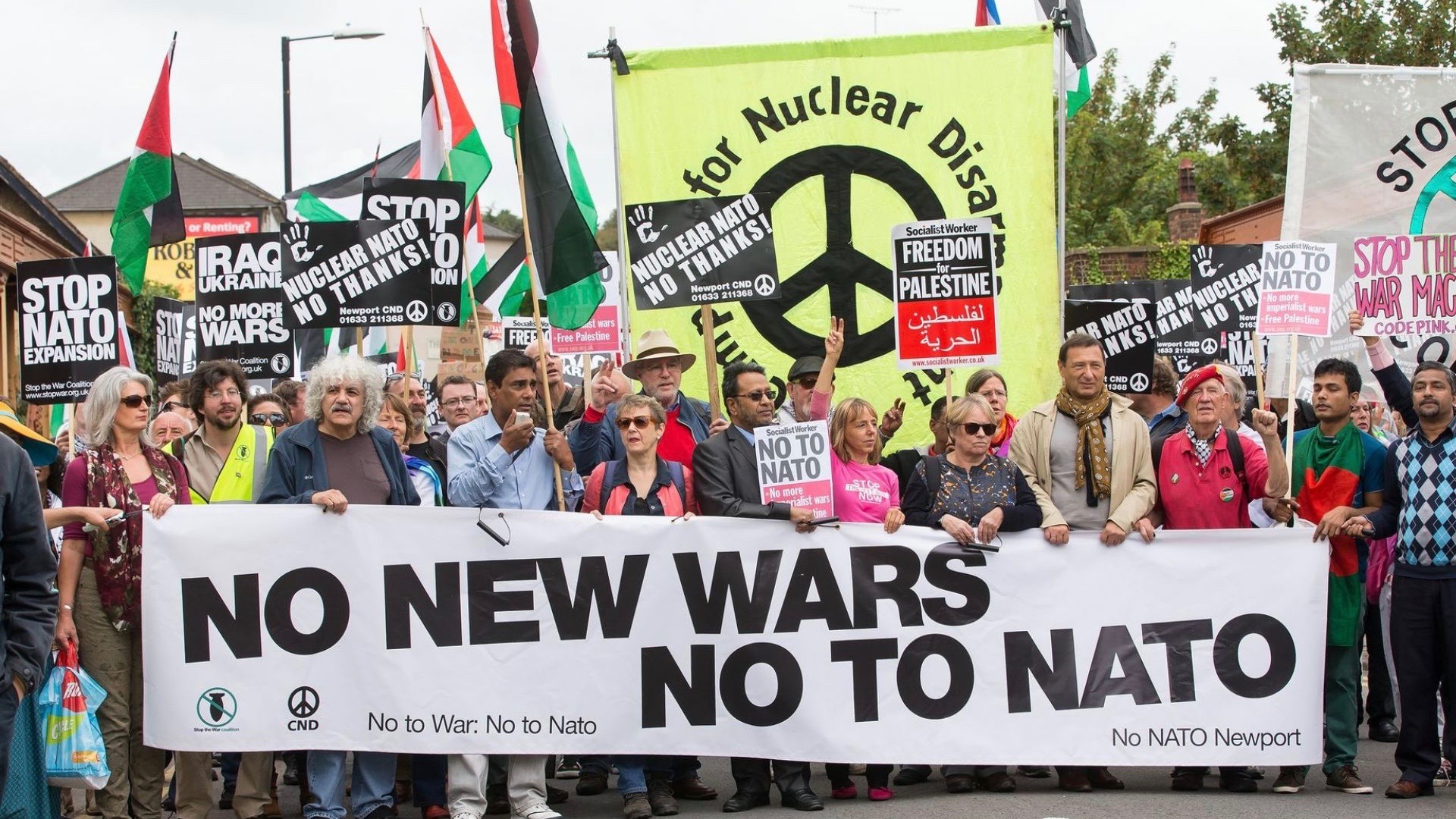 On June 14, 2021 NATO will hold a “Summit of Allied Leaders” at its headquarters in Brussels. According to NATO Secretary General Jens Stoltenber, the meeting “is a unique opportunity to reinforce NATO as the enduring embodiment of the bond between Europe and North America.” The summit will follow a “Group of Seven” (G7) meeting of leaders in the UK from June 11-13.

Toward a renewal of US-EU military relations?

As officially presented, summit discussions will focus on “Russia’s aggressive actions, the threat of terrorism, cyber attacks, emerging and disruptive technologies, the security impact of climate change, and the rise of China.” It will also discuss the NATO 2030 initiative, commissioned in 2019 on reforms to the alliance, after Trump questioned its relevance.

NATO summits after a US election have traditionally been the setting for the alliance to promote “unity”, welcome a new American president and agree on political and military goals. In a visit to Brussels last month, U.S. Secretary of State Antony Blinken said NATO had “rediscovered its better self.”

White House press secretary Jen Psaki added: “This trip will highlight his commitment to restoring our alliances, revitalising the transatlantic relationship, and working in close co-operation with our allies and multilateral partners to address global challenges and better secure America’s interests.”

For many, the purpose of NATO is clear. It is a part of a strategy to renew and strengthen the transatlantic partnership between USA and Europe and to hide the huge internal and external contradictions of USA and Europe by focusing discourse on supposed external enemies.

NATO leads the World to destruction

The NATO 2030 report confirmed the dangerous expansion plans of the transatlantic alliance that would increase international tensions and the risk of war. The report employs an Orwellian newspeak repeating that the alliance is based on “principles of democracy and individual freedom.” It completely obscures NATO’s bloody history of coups d’état, support to dictatorships, destabilization of entire countries and wars resulting in millions of innocent victims. As the No to war – No to NATO network in Belgium underlines, “NATO 2030 confirms NATO as a war alliance that serves the interests of the military-industrial complex, not of the people. It will not bring human security.”

The last example of  this contradictory war policy is the announcement of the United States to withdraw from Afghanistan. The US invasion of Afghanistan in October 2001 was criminal. Immense force was used to demolish Afghanistan’s infrastructure and to break its social bonds. In twenty years, more than 70,000 civilians were killed, without any guarantee of political and social stability. Today, Afghanistan is on the brink of a “civil war” and around 16,000 US contractors and 1,000 undisclosed US troops will remain in the country while aerial bombardments and drone strikes will continue.

The New Cold War on China

Another key element in the NATO 2030 report is the definition of China as an “external enemy” to fight. According to Fiona Edwards of the No Cold War international campaign, “In the recently published NATO 2030 report, China is identified as ‘a full-spectrum systemic rival’. The report ominously recommends that ‘NATO must devote much more time, political resources and action to the security challenges posed by China.’”

This corresponds directly to the United States ongoing campaign of aggression against China amid its economic rise. The US has launched an aggressive trade war accompanied by a huge rearmament campaign that constitutes a military threat. Edwards highlights: “The central foreign policy priority of the US administration under President Joe Biden is to wage a multi-faceted offensive against China, with the goal of blocking China’s peaceful rise and development.”

The United States already possesses around 400 military bases surrounding China and its warships regularly roam the South China Sea. The US military wants to strengthen its power by requesting an extra $27 billion for the next five years in order to build a network of precision-strike missiles along the islands that surround Beijing.

Edwards adds, “This US-led aggression against China is a threat to world peace and is against the interests of the overwhelming majority of humanity.”

From welfare to warfare?

For many anti-war activists including Edwards, the resources which amount to billions of pounds being wasted by the US and its allies in NATO to confront China, should instead be put towards “tackling the real and urgent threats facing humanity including the pandemic and climate change.”

Effectively, in the middle of the pandemic, global military spending reached a record $1,981 billion in 2020. Never before has military spendings been so high. NATO member states account for 55% of the global total. At the request of the United States, they have to spend 2% of their GDP on “defense”.

“Belgium, the host of the next NATO meeting, clearly wanted to be the best student in class. Its military expenditure increased by 11.1% in 2020, amounting to some 4.75 billion euros. 9.2 billion of military investments were contracted by the government of former prime minister Charles Michel [now the president of the European council],” explains Isabelle Vanbrabant from Intal, a Belgium organization working for international solidarity and peace.

Nuclear armament and the ecological challenge

While 122 non-NATO countries are committed to a world without nuclear weapons, NATO clings to nuclear weapons as the “ultimate guarantee” of its security. NATO is leading the transatlantic countries into a nuclear arms race – as if the human catastrophe of Hiroshima and Nagasaki in 1945 or Gerboise Bleue, the French nuclear bomb testing in the Sahara during the Algerian War of Independence in 1960, never happened.

European governments follow the imperialist diktat of NATO and continue to militarize the European territory, people express themselves against any nuclear presence in their territories. The Italian example is striking: “Popular referenda in 1987 and 2011 refused permission of nuclear energy and the military use of nuclear energy in Italy,” says Ada Donno of the Association of Women of the Mediterranean Region (Awmr), a feminist organization affiliated to the Women’s International Democratic Federation (WIDF), “but there are still 40 to 70 nuclear warheads in US and NATO military bases in Italy. This is definitely unconstitutional.”

High military spending and the nuclear arms race are also increasing CO2 emissions enormously. At a time when the general sensitivity for environmental issues has reached the peak thanks to global social movements such as Friday’s For Future and many more, the carbon footprint of the European military industry is about 24.8 million tonnes of CO2 (2019), equivalent to the emissions of about 14 million cars. The CO2 emissions from one hour of flight of an F-35 fighter jet are roughly equivalent to those of eight cars over a whole year. The entire military-industrial complex is one of the main global polluters.

By consequence, militarization, conflicts about access to natural resources and climate change have devastating impacts on the living conditions of the people, above all in the Global South. By 2050, 200 million climate refugees will be looking for new, more habitable places to live. In its report “NATO 2030,” NATO sees this hypocritically as a threat that needs to be “protected militarily”.

Their wars, our lives

The demonstrations in solidarity with the people of Palestine and against the NATO and US-backed Israeli government in recent weeks showed the strong anti-militaristic feeling among people globally. As part of this wave of mobilization, organized sectors of the working class also held protest actions in strategic places to express their solidarity and rejection of militarism.

On May 14, in Italy, Livorno’s dock workers organized in the USB union were informed by the Autonomous Collective of Dockworkers CALP of the port of Genoa about the arrival of a cargo ship loaded with weapons that was headed to the Israeli port of Ashdod. The dockworkers decided to block it. Messages of solidarity and support arrived from other dockworkers all over Europe from Hamburg (Germany) to Piraeus (Greece). For June 14, as part of the Yes To Peace, No To NATO mobilizations, the Italian USB union has called for a national dockworker’s strike in favor of safe working conditions which includes the ban of arms trafficking from all the ports.

On May 17, in Oakland (USA), as part of the actions in solidarity with Palestine, the Arab Resource & Organizing Center and dozens of other progressive organizations called for the boycott and blocking of the apartheid-profiteering ZIM shipping company. ZIM decided not to dock its ship at the Port of Oakland. Those actions were repeated on June 4 during an International Week of Action (#BlockTheBoat) of workers against Israel’s apartheid. On May 20, South African dockers of the port of Durban expanded solidarity actions and refused to unload an Israeli ship. Linking these struggles is a great challenge for the next future.

With the upcoming NATO summit, progressive movements and left parties in the region have organized several events=. In Brussels, on June 13 and 14 a NATO counter summit is being planned by the international peace movement. On June 13, a gathering “STOP NATO 2021” seeks to condemn “the cold war logic orchestrated by NATO” and reject “the ongoing increase of military expenditures”. On the same day, the webinar “Global NATO: a Threat to Peace” will offer information to understand what NATO is today. On June 14, two online meetings – “Dissolution of NATO – for solidarity, sustainability and disarmament” and “Voices for Peace” – will conclude the counter summit.

If anti-militaristic mobilizations seemed to be in hibernation, today we are witnessing a new spring of social and workers movements against war and for social and ecological justice.