Since October 30 2021 first U.S. and then other ‘western’ media have been filled with predictions of a Russian war against the Ukraine.

The world will be watching in horror if Russia invades Ukraine this week — but just watching. Ukraine will fight alone, as Russian tanks roll across the flat, frozen terrain; precision bombs destroy key targets near Kyiv and other cities; and the country becomes a killing field unlike anything Europe has seen since 1945.
…
U.S. military officials say Putin has sent orders to his commanders to prepare for possible battle by the middle of this week, when the ground in central Ukraine will have frozen more than a foot deep, allowing rapid tank advance.

I found that ‘frozen terrain’ bullshit annoying enough to look up the weather forecast for Donetzk. 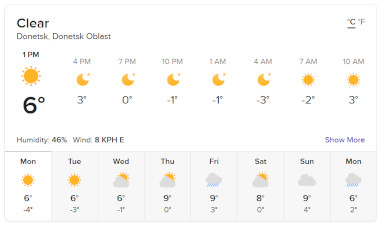 The day temperatures this week will be consistently above zero centigrade. Some mild night frost might freeze over the grass but little below that. It has been the same last week in Donetzk as well as in Kiev, Moscow and Minsk. There is certainly no frozen ground anywhere between those cities.

Alexander Marquardt, currently in the Ukraine on behalf of CNN, confirms that observation:

I’m not taking measurements but if you’re into the frozen ground theory, it’s been mostly above freezing for the week I’ve been in central and eastern Ukraine and all the mud I’ve stepped in is squishy.

Ignatius, and the U.S. military officials he claims to have spoken to, are bullshitting and deceiving the public.

They also lack an understanding of geography and history. Their ‘frozen ground theory’ is based on reading about the famous Pripyat Marshes (also written Pripet or Pinsk) that are hard to cross with tanks unless the ground is deeply frozen:

Known as Pripjet-Sümpfe by the Germans, the wetlands were dreaded by the Wehrmacht troops. During the German invasion of the Soviet Union, the Third Reich armies skirted the wetlands, passing through the north or south of it. However, after the debacle of the Eastern Front in 1944, many retreating units such as the 7th, 35th, 134th and 292nd Infantry Divisions had to cut across the marshy areas. They often needed to build tracks with logs over which they could pull light loads in horse-drawn vehicles.

The Pripyat Marshes do hinder warfare unless the ground is deeply frozen. But they are in southern Belarus and north-west Ukraine. 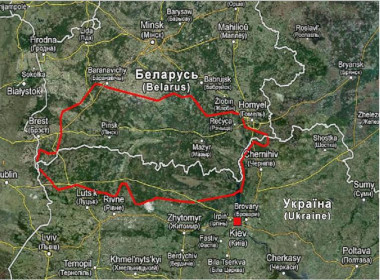 The grounds in south-east Ukraine, where a war would most likely play out, are much firmer. They can be crossed by tanks anytime without much problems.

Nonsense is also what Melinda Haring, the deputy director of the Atlantic Council’s Eurasia Center, is producing. Three days ago she predicted a dire weekend: 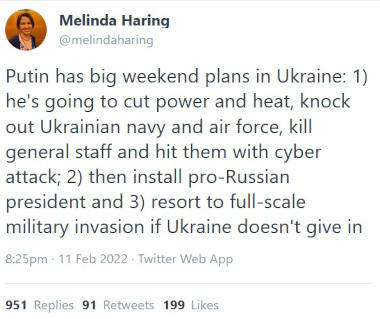 Well the weekend has come and is gone. Power and heat in Kiev are on and not one of her predicted incidents has happened. Haring’s Twitter profile says that she is:

Trying to nudge history in the right direction.

Haring has coauthored the Atlantic Council’s script, Biden and Ukraine: A strategy for the new administration, which proposed an aggressive ant-Russian plan and which the U.S. is playing along.

Russia will not attack the Ukraine. If the Ukraine attacks the rebellious Donbas region Russia will likely wait until Ukrainian ‘progress’ is visible for all to see to then let the Russian military take care of the aggressors by means of artillery and other stand-off weapons.

Today the Russian President Vladimir Putin met with his foreign and defense ministers who reported on recent ‘western’ responses to Russia’s security demands:

#Shoigu will then deliver the list of options developed by the Ministry of Defense.

Grumbling will be heard from the various ‘western’ military headquarters when Russia reveals and implements the ‘military-technical measures’ it had promised should the ‘western’ responses turn out to be insufficient as it now seems to be the case.

Except for more bullshit from clowns like Harding and Ignatius there will likely be nothing that the ‘west’ has to respond to those.