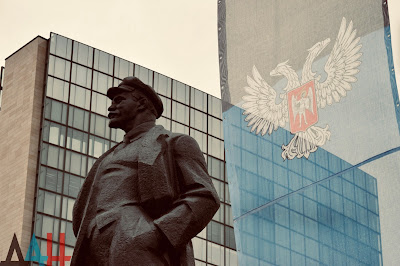 What’s been occurring in Ukraine throughout the last eight years should be closely studied by communists in the United States, Canada, and the other settler-colonial countries. Because it’s a 21st century example of what happens when oppressed nationalities are pushed to a breaking point by fascist violence, then successfully fight back to win their self-determination. In 2014, faced with a takeover by ultra-nationalists who were unleashing neo-Nazi brutality upon Ukraine, the peoples of the Donbass couldn’t afford to stay part of the country. They were the biggest targets for the persecution, because they were especially made up of ethnic Russians. So they resisted and gained their independence, with the Donetsk People’s Republic and the Luhansk People’s Republic having been officially recognized as independent by Russia earlier this year.

Of course Kiev and its NATO backers haven’t agreed that they’re legitimate states, but we know why they haven’t: they couldn’t care less about the wellbeing of the peoples targeted by Ukraine’s racist ultra-nationalism. From NATO’s perspective, the fact that Kiev’s leadership hates Russians with a passion is merely a convenient fact that helps Washington’s hybrid war against Russia.

This story is portentous to what will unfold within the settler-colonial countries. Because when the colonized peoples in these countries resist throughout the coming decades of revolutionary crisis, the imperialists will react the same way they’ve reacted to the Donbass national liberation struggle: with horrific violence. When the Donbass peoples started to resist, the new far-right regime in Kiev expressed intentions to ethnically cleanse the Russian speakers. And by “resist,” I mean the mere practice of national self-identification, which was initially all that the Donbass people did to defy Kiev and which was in itself automatically viewed by Kiev as treasonous. Ukraine’s Defense Minister Mikhail Koval described it as such, classifying anyone who didn’t immediately conform to the new government’s criteria for what it means to be “Ukrainian” as an enemy.

The regime’s plan was to put the Donbass peoples into special “filtration” camps, and forcibly relocate them to Russia—at least those among them who would survive the ordeal. When the people of Crimea responded to the clear menace from Kiev by overwhelmingly voting to be annexed by Russia, and the Russian peoples elsewhere began to wage armed resistance so they could form their own governments, the regime and its imperialist backers waged genocidal war. This is the only way to describe the atrocities that Ukraine has committed in its attempts to regain the eastern territory, both within the conflict’s direct battle zones and in everyday Ukrainian life. Russell Bentley, the communist who defected from the U.S. to fight for the Donbass peoples and who’s since served as a journalist documenting Kiev’s war crimes, has written:

In the summer of 2014, the Ukrainian Army launched a major offensive to isolate the cities of Eastern Ukraine and seal the border with Russia. The people of Lugansk and Donetsk had voted in a referendum to secede, as they regarded the newly imposed Ukrainian government as illegitimate and had close economic and cultural ties to Russia. During this attack, the city of Lugansk (pop. 400K) was surrounded and under siege for several months. Water and electricity were cut, no people or supplies were allowed in or out, and the city was subjected to constant shelling by heavy artillery. Hundreds were killed, and the infrastructure was overwhelmed. The Lugansk city officials were forced to make a mass grave in which more than 200 people, mostly civilians but also some militia members, were buried. The victims were killed primarily by the Ukrainian Army including by shellings—not by the Russians. War crimes were also committed in neighboring villages, including some occupied by right-wing militias that Kyiv had to rely on because many Ukrainians did not want to join the army to fight their own people.

At some point during our generation, the oppressed nations in the United States are going to start rising up in a parallel fashion. The sociological evidence is already there for a coming domestic insurgency, waged by the communities that have been pushed to a breaking point by deepening poverty, an ever deadlier police state, and mass disenfranchisement from the penal system. Our settler-colonial state is cultivating racial tensions that keep getting worse as the forces of capitalist reaction intensify, and that won’t be rectified until the state is overthrown. There’s a dual side to civil wars; on the one hand, guerrilla insurgents can be favored groups that are in danger of losing their status, like the white settlers who’ve lately been forming fascist militias and committing terrorist attacks. On the other hand, an insurrection can come from the most marginalized people, the targets of genocide who have no choice but to revolt.

The country’s path towards civil war stands at the intersection between these two phenomena. As U.S. imperialism collapses, and capital contracts, the U.S. state and its petty-bourgeois settler social base are reacting by intensifying violence against the underclass. As capitalism always does when threatened, the system is turning to fascism. Which is putting the oppressed nationalities, as well as the impoverished whites, in an ever worse position. The oppressed nationalities will be the first among the country’s oppressed people to try to overthrow the state, because they have the least to lose from sacrificing their lives.

From there, proletarians of all colors and nationalities will join them in fighting for a decolonial socialist revolution. Which in simple terms will mean a scenario where jurisdiction has fully been returned to the tribes, and where workers democracy can therefore be built following the abolition of the counterrevolutionary United States. Such a post-colonial arrangement would be complex, and would require additional steps. Steps like the formation of an autonomous African territory, and the creation of a pan-indigenous confederacy which keeps the tribal governments unified. But these are simply the measures required to adequately address all of the contradictions within a country that only exists due to ongoing colonial occupation, and that’s the center of global imperialist violence. Of course revolution will be complex under these circumstances. It’s a small price to pay for freedom.

We know it’s doable because the peoples of the Donbass have shown us an example of such a project, where the oppressed nationalities of a given region gain their self-determination and therefore become able to establish socialism. The DPR and LPR aren’t currently socialist, but it’s because of their independence from Ukraine that they’ve gained the ability to become socialist—parallel to how socialism can’t be built on this continent until the “United States” ceases to occupy the First Nations. With the fascist form that Ukraine has taken on during the last decade, destroying the Ukrainian state, and perhaps even the borders which make up “Ukraine” as we now understand it, is quite clearly the only path to socialism in that region. The nature of settler-colonialism, which necessitates an imperialist exploitation of indigenous territories, makes the equivalent true within the lands currently occupied by the “United States”; an overhaul of borders and land relations as we now know them are instrumental for the liberation of the proletariat under our present conditions.

We must anticipate the fascist backlash when the time comes to fight. We need to look at the shellings of neighborhoods, deliberate destruction of infrastructure, murders of non-combatants, use of paramilitaries to kill with impunity, banning of communist organizing, persecution of political dissidents, and other transgressions that the Ukrainian regime has committed in reaction to the liberation movement, and expect it all to be replicated where we are. We also need to expect the counterrevolutionary violence to be backed by the entirety of the imperialist sphere, like it is in Ukraine. The only way to ensure the revolution’s success is to prepare for physical defense of our cadre members, our families, and our communities—especially the black, indigenous, and other marginalized communities, who will be the groups the fascists try the hardest to exterminate. Ukraine’s recent history, both hopeful and horrific, is a prelude to what will happen where we live.