The Washington Post (11/24/16) last week published a front-page blockbuster that quickly went viral: Russia-promoted “fake news” had infiltrated the newsfeeds of 213 million Americans during the election, muddying the waters in a disinformation scheme to benefit Donald Trump. Craig Timberg’s story was based on a “report” from an anonymous group (or simply a person, it’s unclear) calling itself PropOrNot that blacklisted over 200 websites as agents or assets of the Russian state.

END_OF_DOCUMENT_TOKEN_TO_BE_REPLACED

The Major Purveyor of ‘Fake News’ is the CIA-Corporate Complex

The US corporate media, its strings pulled by the modern version of the Central Intelligence Agency’s old Operation MOCKINGBIRD media influencing operation, is laughably accusing Russia of generating «fake news» to influence the outcome of the American presidential election. In a November 24, 2016, article in the CIA-connected Washington Post, reporter Craig Timberg reported: «Russia’s increasingly sophisticated propaganda machinery — including thousands of botnets, teams of paid human ‘trolls,’ and networks of websites and social-media accounts — echoed and amplified right-wing sites across the Internet as they portrayed Clinton as a criminal hiding potentially fatal health problems and preparing to hand control of the nation to a shadowy cabal of global financiers». The Post’s article is worthy of the CIA-generated propaganda spun by the paper at the height of the Cold War-era MOCKINGBIRD.

END_OF_DOCUMENT_TOKEN_TO_BE_REPLACED

It gets even  more interesting. It’s clear that the morons in government are totally clueless about what to do about Brexit (I have sneaking suspicion that they hope it’ll just go away, somewhere). So I read that now, David Davies the ‘Brexit Minister’ is advocating paying to stay in the single market (BBC Radio 4 News). But you can bet that whatever the outcome it’ll be us that does the paying and not David Davies and his ilk.

Will it drag on forever until we’ve mostly forgotten about it, or will the rising water levels push such mundane things from our minds?

The future does indeed look bleak, so bleak in fact, that it’s unlikely we have one. So if the Orange Menace doesn’t invade (fill in the country) climate disaster will overtake, well firstly the poor of the planet  will be the first to pay (check Bangla Desh for example if you don’t believe me). Climate change is already impacting on tens of million of lives! But they’re poor and have brown skins, so it’s nothing new, we’ve been slaughtering them for centuries. The only difference now is the scale of the slaughter, now it’s planetary.

The final crisis of capital is upon us. War by climate change or war engineered to keep the imperialist economies from crashing. I truly think this is the last chance we have to save the planet and even then, it may well already be too late.

Back when I had a burst of enthusiasm to write again, brought on by Corbymania and Brexit, I ventured to say that in all likelihood, we’d never leave the EU and, as things developed, I figured I’d probably have to eat my owns words.

On a regular basis, I read all kinds of news stories from all over the place and one, from South Africa actually, carried the following:

UK parliament must vote on Brexit

The British High Court has ruled that the parliament must vote on Brexit. The ruling has the immediate effect that the UK cannot enact Article 50 and begin the EU departure. In the long-term, it may result in a parliamentary vote overruling the referendum. Resident UKIP ghoul Nigel Farage was quick to point out that this would be a betrayal of the overwhelming 51.2% majority of voters who want to see Britain leave the EU. 3 November 2016, The Daily Maverick

So, this really throws the cat amongst the pigeons. What if Parliament rejects Brexit? And what will the EU do if it does?

As the Chinese curse has it, ‘may you live in interesting times’. 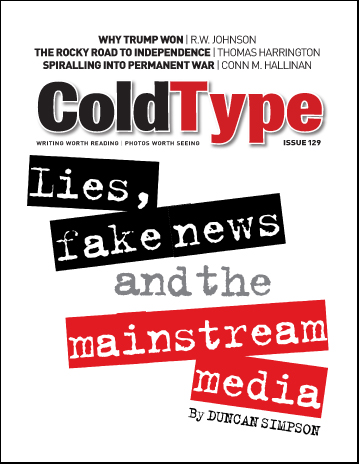 END_OF_DOCUMENT_TOKEN_TO_BE_REPLACED

The New York Times (11/29/16) declares that Carrier’s job announcement “signals that Mr. Trump is a different kind of Republican.”

The Carrier company’s announcement that, after exhortations from Donald Trump, it was going to move a thousand jobs overseas—rather than the 2,000 that it had previously planned to move—led New York Times reporter Nelson Schwartz (11/29/16) to declare that “Mr. Trump is a different kind of Republican, willing to take on big business, at least in individual cases”:

Just as only a confirmed anti-Communist like Richard Nixon could go to China, so only a businessman like Mr. Trump could take on corporate America without being called a Bernie Sanders–style socialist. If Barack Obama had tried the same maneuver, he’d probably have drawn criticism for intervening in the free market.

END_OF_DOCUMENT_TOKEN_TO_BE_REPLACED

BAR and 12 other leftwing web sites have been put on a hit list publicized by the Washington Post. Fascists of the Democratic kind are responsible. “Had Clinton won the election, she would have begun a campaign of repression against the Left along the same national security lines as the Washington Post article, with that paper probably leading the propaganda charge.” Donald Trump isn’t the only fascist to worry about.

END_OF_DOCUMENT_TOKEN_TO_BE_REPLACED

Fascism with a Democratic Party Face

Fascism Last Stage of Capitalism
BAR and 12 other leftwing web sites have been put on a hit list publicized by the Washington Post. Fascists of the Democratic kind are responsible. “Had Clinton won the election, she would have begun a campaign of repression against the Left along the same national security lines as the Washington Post article, with that paper probably leading the propaganda charge.” Donald Trump isn’t the only fascist to worry about. END_OF_DOCUMENT_TOKEN_TO_BE_REPLACED

The Liberation of Aleppo: Tears, Hugs and Smiles, the Relief of Escaping Imprisonment in East Aleppo

These images and videos will never see the light of day in the corporate media editing rooms because they expose their almost six year narrative on Syria as one of the most criminal propaganda projects ever deployed against a sovereign nation, its people, its state and its national army.

END_OF_DOCUMENT_TOKEN_TO_BE_REPLACED

Andrew Ross Sorkin (New York Times, 11/28/16): “Some of your critics will deride the corporate monitor as mere window dressing.” And those critics would be right.

Donald Trump is about to become president and immediately begin violating the Constitution. The Constitution explicitly prohibits the president from taking payments and gifts from foreign governments. (Can we stop using the term “emolument“? No one has used it for a hundred years. We want to be clear on what the Constitution means.)