END_OF_DOCUMENT_TOKEN_TO_BE_REPLACED

No Tokens with Trump, No time for Fear: These are Revolutionary Times

by Danny Haiphong The corporate media would have you believe that stark differences divide the duopoly parties. The opposite is true. Democrats and establishment Republicans “have united on questions of war, austerity, and state-sponsored surveillance.” If anything, the major parties have solidified their “bipartisan consensus on privatization of education, healthcare, and the public sector” – as demanded by their corporate masters in this time of systemic… Read more » END_OF_DOCUMENT_TOKEN_TO_BE_REPLACED

2. ‘The Punk Kings of Dyslexia’ with Stephen Micalef
3. ‘Sound System: The Political Power of Music’ with Dave Randall
4. ‘Free Movement and Beyond: Agenda Setting for Brexit Britain’ with Kate Hudson
5. ‘The Political Thought of Abdullah Öcalan – Kurdistan, Women’s Revolution And Democratic Confederalism’ with Dr Kamran Matin, Dilar Dirik, and Reimer Heider
6. ‘Voices from the “Jungle” – Stories From The Calais Refugee Camp’
7. ‘Signal Failure: London to Birmingham, HS2 on foot’ with Tom Jeffreys
8. ‘Surviving The Future: culture, carnival, and capital in the aftermath of the market economy’ with Shaun Chamberlin END_OF_DOCUMENT_TOKEN_TO_BE_REPLACED

Ending Syria’s Nightmare will Take Pressure From Below

Ominous developments have drawn the United States and Russia into closer proximity increasing the likelihood of a violent confrontation. END_OF_DOCUMENT_TOKEN_TO_BE_REPLACED 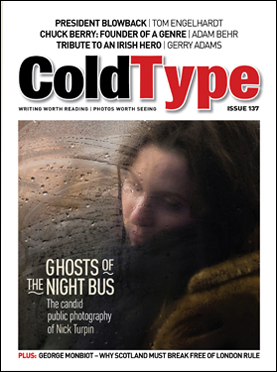 END_OF_DOCUMENT_TOKEN_TO_BE_REPLACED

Glyphosate — the active ingredient in Monsanto’s Roundup and other herbicides — is the most widely used agricultural chemical in the world, and testing suggests a large portion of the global population now has glyphosate in their system.

According to the International Agency for Research on Cancer (IARC), a research arm of the World Health Organization (WHO) and the “gold standard” in carcinogenicity research, glyphosate is a “probable human carcinogen” (Class 2A).1,2

Research scientist Anthony Samsel has also reported he has evidence showing Monsanto is well aware glyphosate promotes cancer, and that they’ve had this knowledge since 1981.

Publicly, the company has insisted glyphosate is harmless to both environment and human health, but recent revelations are beginning to unravel Monsanto’s carefully orchestrated plot to deceive the public.

The New York Times argues that Congress has a duty to authorize war–rather than a responsibility to determine whether war should be fought.

As reports come in detailing the degree to which Donald Trump has escalated the “War on ISIS”—and killed hundreds more civilians in the process—this would seem like a good time for the country to sit back and examine the United States’ approach to fighting “terrorism” and its recent iteration, the so-called Islamic State. END_OF_DOCUMENT_TOKEN_TO_BE_REPLACED

Fake News: The Unravelling of US Empire From Within

The ruling big lies of the US money party and corporate globalization have divided into opposing camps. The Press and the President denounce each other non-stop on the public stage, while US dark state agents take sides behind the scenes.

END_OF_DOCUMENT_TOKEN_TO_BE_REPLACED

Can Marxism strengthen our understanding of ecological crises? The author of Marx’s Ecology replies to a critic on metabolic rift, sustainable human development,  degrowth, population growth, and industrialism.

C&C has added paragraph breaks to both articles to improve on-screen readability.

END_OF_DOCUMENT_TOKEN_TO_BE_REPLACED

It has been a while since we last sent a newsletter. Our apologies for that, but we have been kept busy!

We are entering a period where a lot of things are happening – and are likely to happen – in quick succession, so we wanted to provide a perspective and some context that we hope will help explain at least some of what is going on.

END_OF_DOCUMENT_TOKEN_TO_BE_REPLACED

What America’s Coup in Ukraine Did

On March 23rd, Gallup headlined “South Sudan, Haiti and Ukraine Lead World in Suffering”, and the Ukrainian part of that can unquestionably be laid at the feet of U.S. President Barack Obama, who in February 2014 imposed upon Ukraine a very bloody coup (see it here), which he and his press misrepresented (and still misrepresent) as being (and still represent as having been) a ‘democratic revolution’, but was nothing of the sort, and actually was instead the start of the Ukrainian dictatorship and the hell that has since destroyed that country, and brought the people there into such misery, it’s now by far the worst in Europe, and nearly tied with the worst in the entire world.