On Friday night ET, in the early hours of the morning in Damascus, the US, UK and France launched airstrikes allegedly (yet to be verified) against three military targets, according to Trump’s TV address.

To date, all supposed evidence comes from Western-funded militants and their auxiliaries including the US-European government-funded front, the so-called “Syria Civil Defense,” better known at the “White Helmets.” Unverified photographs and video of apparent victims have been the sole sources cited by the US.

It was a political lie from the start and then it became a media lie, which was used as an instrument of war propaganda.

The war criminals in high office blame the victims. Trump accuses Assad: “Persistent violations of international law”, by whom? What is the legality of Trump’s punitive bombing campaign?

Britain and France joined the United States in the strikes in a coordinated operation that was intended to show Western resolve in the face of what the leaders of the three nations called persistent violations of international law. Mr. Trump characterized it as the beginning of a sustained effort to force Mr. Assad to stop using banned weapons, but only ordered a limited one-night operation that hit three targets.

“These are not the actions of a man,” Mr. Trump said of last weekend’s attack in a televised address from the White House Diplomatic Room. “They are crimes of a monster instead.” (Guardian, May 13, 2018)

It is worth noting that there were divisions within Trump’s war cabinet. According to an earlier statement, Defense Secretary Mattis was hesitant regarding the conduct of the air strikes.

Earlier on Friday, President Trump had intimated that “a final decision on possible military strikes against Syria … could happen “very soon or not so soon at all” following warnings by Defense Secretary Jim Mattis that “such an attack carried the risk of spinning out of control, suggesting caution ahead of a decision on how to respond to a [chemical weapons] attack against civilians last weekend [in Douma].”

Hours before the decision to strike Syria, there were hesitations. Acknowledged by the war cabinet, there was no firm evidence that the Syrian government was behind the chemical attack. The OPCW team arrived on the 13th to undertake this investigation. It was slated to start its work on the 14th. The air strikes have been instrumental in totally disrupting the conduct of the OPCW investigation. 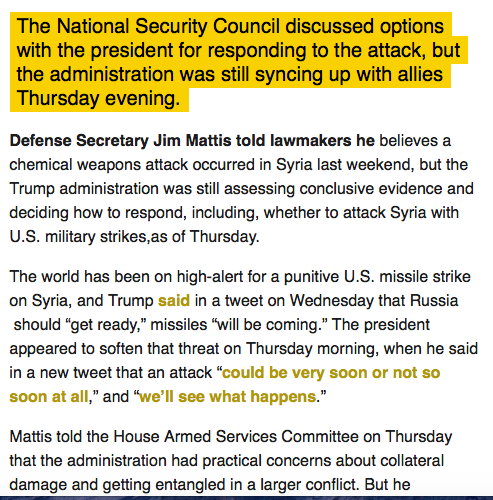 One thought on “Trump’s Punitive Air Strikes against Syria. No Evidence that Assad was Behind the Alleged Chemical Weapons Attack By Prof Michel Chossudovsky”