Dr Busby says a few words about the Russian Nerve Agent issue. He speaks as an expert in this area.

Chris worked for several years at the famous Wellcome Research laboratories in Beckenham, London as a Senior Scientist in the Department of Physical Chemistry. His job, at the basic level, was to help determine the structure and origin of pharmaceutical compounds. So, he is an expert in this area.

END_OF_DOCUMENT_TOKEN_TO_BE_REPLACED 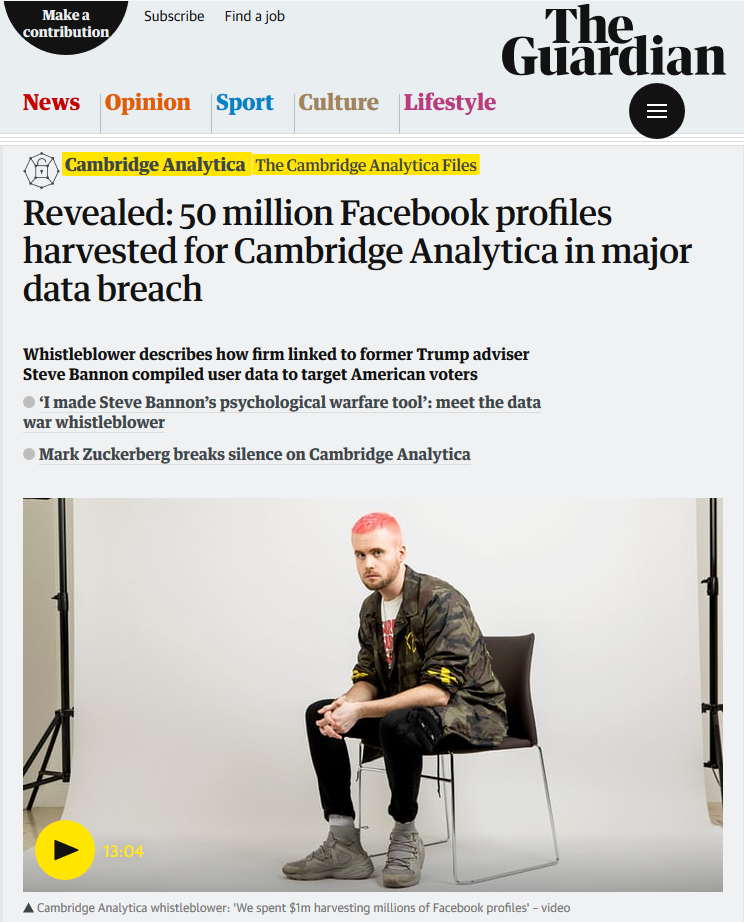 Facebook “failed to alert users and took only limited steps to recover and secure the private information of more than 50 million individuals” (London Observer, 3/17/18).

After decades of regulatory neglect, Big Tech is finally coming under the microscope.

Facebook is under fire for (among other things) its involvement with Cambridge Analytica, a British data analytics firm funded by hedge fund billionaire and major Republican party donor Robert Mercer and formerly led by President Trump’s ex–campaign manager and strategist Steve Bannon. Cambridge Analytica harvested data from over 87 million Facebook profiles (up from Facebook’s original count of 50 million) without the users’ consent, according to a report by the London Observer (3/17/18) sourced to a whistleblower who worked at Cambridge Analytica until 2014.

END_OF_DOCUMENT_TOKEN_TO_BE_REPLACED

The Palestinians have long been seen as an obstacle by Israel’s leaders; an irritant to be subjugated. Noam Chomsky commented:

‘Traditionally over the years, Israel has sought to crush any resistance to its programs of takeover of the parts of Palestine it regards as valuable, while eliminating any hope for the indigenous population to have a decent existence enjoying national rights.’

END_OF_DOCUMENT_TOKEN_TO_BE_REPLACED

Yesterday’s alleged ‘gas attack’ in east Ghouta likely never happened. A video shows a number of presumably dead kids in a basement or dark apartment. Another video shows an undamaged yellow gas cylinder which, we are told, was dropped from some unseen helicopter and crashed through a concrete roof. We do not know when or where these videos were made.

END_OF_DOCUMENT_TOKEN_TO_BE_REPLACED

Former UK Envoy to Uzbekistan Craig Murray had a bone to pick with a Sky News presenter after his detailed interview on the Salisbury poisoning failed to make it onto the network’s website. Murray told RT why it was “buried.”

“[The interview] was broadcast live, but Sky’s daytime audience is not all that large,” Murray told RT. “A lot of people missed it and wanted to see it on their website but it wasn’t shown there at all, and they said it would be.” END_OF_DOCUMENT_TOKEN_TO_BE_REPLACED

Iraq, Massacre of a Country: “A War on Terror” when you are the Terrorist

“How can you make a war on terror when you are actually the terrorist?” (Unknown.)

America’s 2003 assault on Iraq, already devastated by thirteen years of sanctions, infrastructure destruction consequently unrepaired from the 1991 bombing was, in the ridiculous annals of names the US military gives to their slaughter-fests, entitled: “Shock and Awe.” END_OF_DOCUMENT_TOKEN_TO_BE_REPLACED

Facebook just made the stunning admission that 100 percent of its 2 billion users have likely had their personal data stolen by “malicious actors.”[1]

That’s right. One hundred percent. If you’re on Facebook, then it’s a virtual lock that your data has been stolen.