What is left of the government’s definitive identification of Russia as the culprit in the Salisbury attack? It is a simple truth that Russia is not the only state that could have made the nerve agent: dozens of them could. It could also have been made by many non-state actors.

END_OF_DOCUMENT_TOKEN_TO_BE_REPLACED

A week after Paul Moore received a life sentence for the attempted murder of a Muslim woman and a 12-year-old girl in Leicester, communities came together to express disgust at the anonymous far-right campaign to make 3 April ‘Punish a Muslim Day’. At public events across the UK, speaker after speaker reminded us that racism is about violence and that some of the most life-threatening violent incidents in Britain today are directed at Muslims. And yet Islamophobia is a form of racism that is rarely explored by the British press. END_OF_DOCUMENT_TOKEN_TO_BE_REPLACED

– Bruce A. Dixon , BAR managing editor
Our black political class observed the 50th anniversary of MLK’s martyrdom this week, but ignored the Gaza Land Day massacre perpetrated by apartheid Israel with full bipartisan US support. What would MLK do? END_OF_DOCUMENT_TOKEN_TO_BE_REPLACED 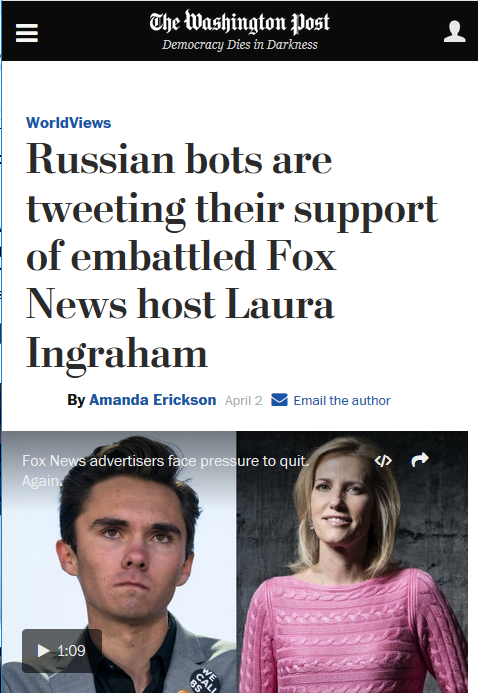 Washington Post (4/2/18): “Wading into controversy is a key strategy for Russian propaganda bots.”

One could forgive the average reader for thinking reporters covering bots had been replaced by bots. The formula is something we’ve seen a million times now: After a controversial story breaks, media outlets insist that “Russian bots” used the controversy to “sow discord” or “exploit tensions”; a “Russian bot dashboard” is offered as proof. (These “dashboards” let one see what Russian bots—automated online persona controlled by the Kremlin—are allegedly  “pushing” on social media.)