For years, SumOfUs members like you have been taking action to protect the world’s threatened bee populations. And last week, we scored our biggest win yet.

The EU voted for a near-complete ban on three neonics — pesticides that pose a deadly risk to bees and other pollinators. And it’s your actions and the work of our partners across Europe that made this happen.

Thank you so much! 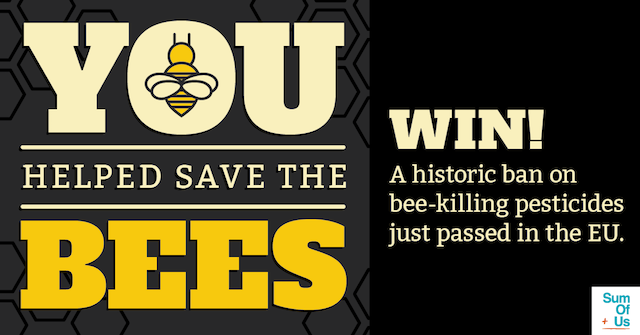 Bayer and Co. put up the fight of a lifetime to avoid this ban — from covering up study results to suing the European Commission for earlier restrictions on their bee-killing pesticides.

But together, we took on Goliath — and won. You proved that when hundreds of thousands of us join forces, we are stronger together. In Europe and around the globe, SumOfUs is a force to be reckoned with — but only because of members like you.

More than 600,000 of you signed the petition to EU governments. Thousands of you sent tweets and emails to key decision-makers, and chipped in to get our message across on huge ads at Brussels Airport — and in major news outlets read by EU officials.

On the morning of the historic vote, we knew it would be close — we were due to win or lose by a razor-thin margin. So we went all out — and it worked. When the proposal went forward, we crossed the threshold with exactly the right number of “Yes” votes we needed to pass the ban.

It was your support that helped tip the scales.

Check out some of the ads the SumOfUs community made possible from the week before the vote: 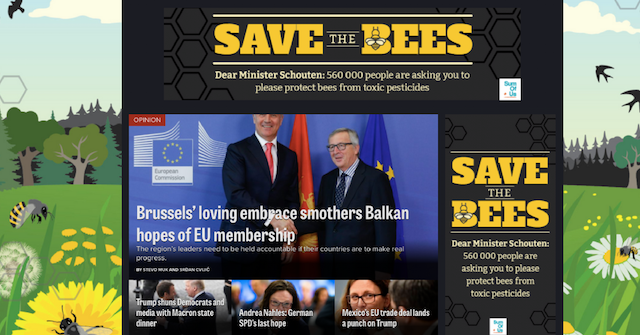 …and national newspapers in the Netherlands and Sweden.

The near-complete EU ban on widespread neonics is a massive victory. But of course, corporations like Bayer will fight back — and we are prepared to stop them.

This month, we’re headed to Bayer’s annual shareholder meeting in Bonn to hold the company to account and call on its board to stop pursuing such a destructive business model. We are prepared to help beekeepers and scientists defend the EU ban in court. And together, we will push for governments around the world to step up their plans to protect bees as well.

For now, though, we’d like to take a moment to appreciate everything SumOfUs members like you have done to get us to this point. We’ve proven once again that when our community comes together, we can push back against corporations to accomplish lasting change.

The bees thank you. So do we.

Wiebke, Nabil and the team at SumOfUs

P.S. It’s only thanks to SumOfUs members like you that we won this amazing and historic bee-saving ban. But the battle to save the bees is far from over. Bayer and Co. will not give up now and neither can we. To keep the bees safe from pesticide giants we need support from members like you. Please can you set up a small monthly donation today so that we can keep fighting for and saving the bees.