In 2015 the government of Britain launched a secret operation to insert anti-Russia propaganda into the western media stream.

We have already seen many consequences of this and similar programs which are designed to smear anyone who does not follow the anti-Russian government lines. The ‘Russian collusion’ smear campaign against Donald Trump based on the Steele dossier was also a largely British operation but seems to be part of a different project.

The ‘Integrity Initiative‘ builds ‘cluster’ or contact groups of trusted journalists, military personal, academics and lobbyists within foreign countries. These people get alerts via social media to take action when the British center perceives a need.

On June 7 it took the the Spanish cluster only a few hours to derail the appointment of Perto Banos as the Director of the National Security Department in Spain. The cluster determined that he had a too positive view of Russia and launched a coordinated social media smear campaign (pdf) against him. 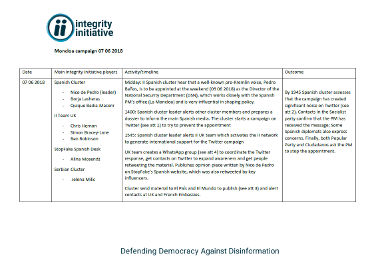 The Initiative and its operations were unveiled when someone liberated some of its documents, including its budget applications to the British Foreign Office, and posted them under the ‘Anonymous’ label at cyberguerrilla.org.

The Initiative is nominally run under the (government financed) non-government-organisation The Institute For Statecraft. Its internal handbook (pdf) describes its purpose:

The Integrity Initiative was set up in autumn 2015 by The Institute for Statecraft in cooperation with the Free University of Brussels (VUB) to bring to the attention of politicians, policy-makers, opinion leaders and other interested parties the threat posed by Russia to democratic institutions in the United Kingdom, across Europe and North America.

It lists Bellingcat and the Atlantic Council as “partner organisations” and promises that:

Cluster members will be sent to educational sessions abroad to improve the technical competence of the cluster to deal with disinformation and strengthen bonds in the cluster community. […] (Events with DFR Digital Sherlocks, Bellingcat, EuVsDisinfo, Buzzfeed, Irex, Detector Media, Stopfake, LT MOD Stratcom – add more names and propose cluster participants as you desire).

The Initiatives Orwellian slogan is ‘Defending Democracy Against Disinformation’. It covers European countries, the UK, the U.S. and Canada and seems to want to expand to the Middle East.

On its About page it claims: “We are not a government body but we do work with government departments and agencies who share our aims.” The now published budget plans show that more than 95% of the Initiative’s funding is coming directly from the British government, NATO and the U.S. State Department. All the ‘contact persons’ for creating ‘clusters’ in foreign countries are British embassy officers. It amounts to a foreign influence campaign by the British government that hides behind a ‘civil society’ NGO.

The organisation is led by one Chris N. Donnelly who receives (pdf) £8,100 per month for creating the smear campaign network. From its 2017/18 budget application (pdf) we learn how the Initiative works:

To counter Russian disinformation and malign influence in Europe by: expanding the knowledge base; harnessing existing expertise, and; establishing a network of networks of experts, opinion formers and policy makers, to educate national audiences in the threat and to help build national capacities to counter it.

The Initiative has a black and white view that is based on a “we are the good ones” illusion. When “we” ‘educate the public’ it is legitimate work. When others do similar, it its disinformation. That is of course not the reality. The Initiative’s  existence itself, created to secretly manipulate the public, is proof that such a view is wrong.

If its work were as legit as it wants to be seen, why would the Foreign Office run it from behind the curtain as an NGO? The Initiative is not the only such operation. It’s applications seek funding from a larger “Russian Language Strategic Communication Programme” run by the Foreign Office.

The 2017/18 budget application sought FCO funding of £480,635. It received £102,000 in co-funding from NATO and the Lithuanian Ministry of Defense. The 2018/19 budget application shows a planned spending (pdf) of £1,961,000.00. The co-sponsors this year are again NATO and the Lithuanian MoD, but also include (pdf) the U.S. State Department with £250,000 and Facebook with £100,000. The budget lays out a strong cooperation with the local military of each country. It notes that NATO is also generous in financing the local clusters.

One of the liberated papers of the Initiative is a talking points memo labeled Top 3 Deliverable for FCO (pdf):

Under top 1, setting up clusters, a subitem reads:

– Connects media with academia with policy makers with practitioners in a country to impact on policy and society: (Jelena Milic silencing pro-kremlin voices on Serbian TV)

Defending Democracy by silencing certain voices on public TV seems to be a self-contradicting concept.

Another subitem notes how the Initiative secretly influences foreign governments:

We engage only very discreetly with governments, based entirely on trusted personal contacts, specifically to ensure that they do not come to see our work as a problem, and to try to influence them gently, as befits an independent NGO operation like ours, viz;

– Germany, via the Zentrum Liberale Moderne to the Chancellor’s Office and MOD

– Netherlands, via the HCSS to the MOD

– Poland and Romania, at desk level into their MFAs via their NATO Reps

– Spain, via special advisers, into the MOD and PM’s office (NB this may change very soon with the new Government)

– Norway, via personal contacts into the MOD

– HQ NATO, via the Policy Planning Unit into the Sec Gen’s office.

We have latent contacts into other governments which we will activate as needs be as the clusters develop.

A look at the ‘clusters’ set up in U.S. and UK shows some prominent names. 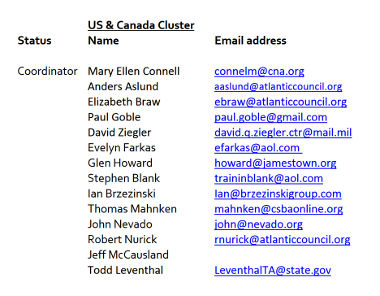 Members of the Atlantic Council, which has a contract to censor Facebook posts, appear on several cluster lists. The UK core cluster also includes some prominent names like tax fraudster William Browder, the daft Atlantic Council shill Ben Nimmo and the neo-conservative Washington Post columnist Anne Applebaum. One person of  interest is Andrew Wood who handed the Steele ‘dirty dossier’ to Senator John McCain to smear Donald Trump over alleged relations with Russia. A separate subcluster of so-called journalists names Deborah Haynes, David Aaronovitch of the London Times, Neil Buckley from the FT and Jonathan Marcus of the BBC. 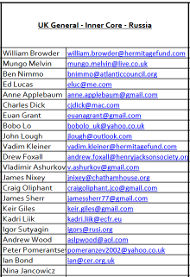 A ‘Cluster Roundup‘ (pdf) from July 2018 details its activities in at least 35 countries. Another file reveals (pdf) the local partnering institutions and individuals involved in the programs.

The Initiatives Guide to Countering Russian Information (pdf) is a rather funny read. It lists the downing of flight MH 17 by a Ukranian BUK missile, the fake chemical incident in Khan Sheikhoun and the Skripal Affair as examples for “Russian disinformation”. But at least two of these events, Khan Sheikun via the UK run White Helmets and the Skripal affair, are evidently products of British intelligence disinformation operations.

The probably most interesting papers of the whole stash is the ‘Project Plan’ laid out at pages 7-40 of the 2018 budget application v2 (pdf). Under ‘Sustainability’ it notes:

The programme is proposed to run until at least March 2019, to ensure that the clusters established in each country have sufficient time to take root, find funding, and demonstrate their effectiveness. FCO funding for Phase 2 will enable the activities to be expanded in scale, reach and scope. As clusters have established themselves, they have begun to access local sources of funding. But this is a slow process and harder in some countries than others.

The ATA [Atlantic Treaty Association] promises to be the same, giving access to other pots of money within NATO and member nations. Funding from institutional and national governmental sources in the US has been delayed by internal disputes within the US government, but w.e.f. March 2018 that deadlock seems to have been resolved and funding should now flow.

The programme has begun to create a critical mass of individuals from a cross society (think tanks, academia, politics, the media, government and the military) whose work is proving to be mutually reinforcing. Creating the network of networks has given each national group local coherence, credibility and reach, as well as good international access. Together, these conditions, plus the growing awareness within governments of the need for this work, should guarantee the continuity of the work under various auspices and in various forms.

The third part of the budget application (pdf) list the various activities, their output and outcome. The budget plan includes a section that describes ‘Risks’ to the initiative. These include hacking of the Initiatives IT as well as:

Adverse publicity generated by Russia or by supporters of Russia in target countries, or by political and interest groups affected by the work of the programme, aimed at discrediting the programme or its participants, or to create political embarrassment.

We hope that this piece contributes to such embarrassment.