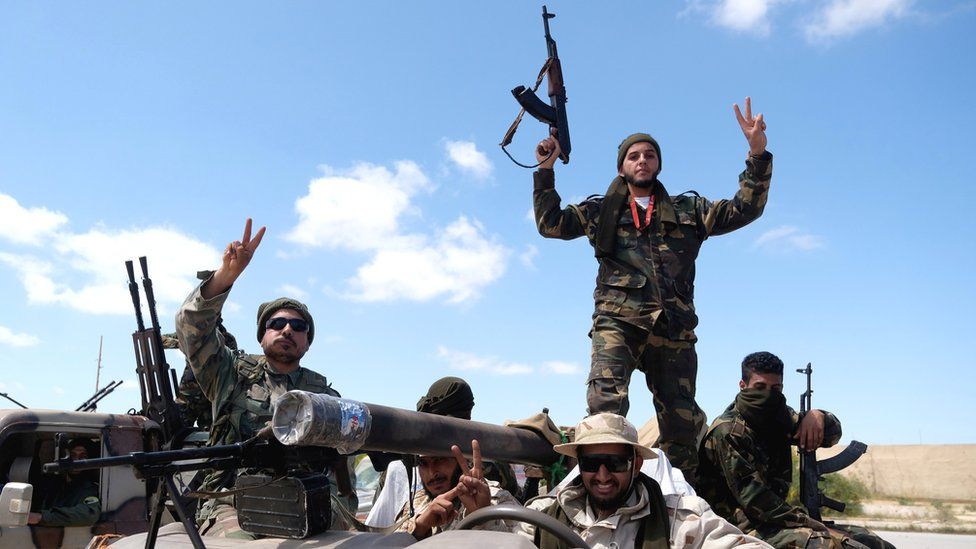 Flights at Mitiga International Airport were suspended and passengers were evacuated. No casualties were reported.

Tripoli International, an older airport, has also been a focal point for clashes in recent days. The airport has not been operating since 2014.

Fayez al-Serraj, Prime Minister of one of the two governments in Libya, has accused Haftar of attempting to carry out a coup.

At least 2,800 people have so far fled fighting around Tripoli.

The UN warns that those who remain risk being cut off from vital services because of the clashes.

International powers have started evacuating personnel from the country as the situation has deteriorated.

An official source said at least 25 people had been killed and 80 wounded so far, including civilians and fighters.

Haftar’s forces said they had lost at least 19 fighters.

Much of the international community have called for a ceasefire to hostilities.

The US military is among those to withdraw its supporting forces based in Libya, blaming the “complex and unpredictable” situation and “increased unrest” on the ground.

The UN is also due to pull out non-essential staff.

Residents of Tripoli have reportedly begun stocking up on food and fuel.

An LNA spokesperson said the battle for Tripoli was proceeding according to the operational plan as LNA units were approaching residential areas of the city.

Since the beginning of its military offensive to Tripoli on April 4, the LNA has seized several cities near Tripoli.

The Medecins Sans Frontieres (MSF) expressed “extreme concern” over migrants that are held in Libyan detention centers located in or near areas affected by the ongoing fighting between Libya’s rival forces.

The UN has condemned an air strike that closed the only functioning airport in Libya’s capital, Tripoli, on Monday.

Haftar, who already presides over the majority of Libyan territory, aims to take full control of the country. Prime Minister Fayez al-Serraj, leader of another government, accused Haftar of mounting a coup. Fayez al-Serraj said rebels would be met with force.

Field Marshal Haftar announced an offensive against Tripoli in a bid to oust “militias” from the city last week. On April 7, the forces loyal to the Tripoli-based Government of National Accord (GNA) said that they were launching a counteroffensive, dubbed Volcano of Rage.

Since the beginning of the offensive, the LNA has already gained control over several cities near Tripoli and over Tripoli International Airport. The GNA later said its forces had retaken the airport, but the LNA refuted the claims.

LNA has declared a no-fly zone over the western parts of Libya, which are governed by the GNA, and has warned that all aircraft, apart from commercial flights, that breach the restrictions will be targeted by the LNA, the forces’ spokesperson, Ahmed Al-Mismari, said.

Political turmoil has gripped Libya since imperialism deposed and killed Muammar Gaddafi, the Libyan leader, in 2011. Because of a civil conflict since 2011, there is no single central government in Libya, and separate powers control the country’s eastern and western parts. The Tobruk-based parliament, elected in 2014 and backed by the LNA, governs the east of Libya, while the GNA, established in 2015, controls Libya’s western parts from Tripoli.

In late 2015, the parties to the conflict signed a Libyan Political Agreement in the Moroccan city of Skhirat, outlining the creation of the GNA as the legitimate interim Libyan government. However, the deal was not fully implemented due to the eastern-based parliament’s disagreement over some of its provisions.

Al-Arabiya report said: Qatrani decided to resign being dissatisfied with Fayez Sarraj making decisions on his own. Qatrani also stressed that the prime minister would make Libya split and suffer even more.

218 TV channel reported: Qatrani expressed support for military operations going on in Tripoli that are conducted by the LNA.

The Tripoli-based Presidential Council of Libya carries out the functions of supreme executive authority in the country and is presiding over the GNA. Sarraj is currently the head of both structures.

The French president “harshly criticized the aggression against the capital, which puts civilians at risk”, said a GNA statement.

Sarraj promised to Macron he would “stand up to this aggression”, adding Haftar “has only one option, which is to immediately stop, go back to where he came from”.

France of being behind Libya’s Tripoli war

Antonio Tajani, President of the European Parliament, has accused France of intervening in Libya to serve its interests after nearly four days of clashes in the suburbs of Tripoli.

Tajani, who is also vice president of the Italian party “Forza Italia”, commented on the Italian Interior Minister, Matteo Salvini’s statements that the economic interests of a foreign country are behind the military operation launched on the Libyan capital, Tripoli, in an implicit reference to France.

“We have always said that France and Italy have separate interests in Libya, so much so, that Sarkozy was one of the strong supporters of overthrowing and then killing Muammar Gaddafi along with the Americans and the British,” Tajani told Italian media.

“France has made a dramatic historical mistake and was hoping for a stronger presence in Libya, but at the end, there is nothing but chaos and we have paid the price, through the continuing migration flows,” he added.

He further explained that what is happening now reflects Italy’s inability to be in the dominion of the situation in Libya, saying that this will open the door for new migration flows.

Tajani stressed that any new civil war in Libya will force hundreds of thousands of people to flee that country, warning that if stability is not established in Libya by this season, there will be 2.5 billion Africans in Europe by 2050.

“If nothing is done now, the situation will become unmanageable,” he added, warning that Italy and all Europe will be the first to pay the price, saying “This is why we must move now; Italy, unfortunately, has achieved nothing in Libya”.

The EU Parliament head’s remarks came on the eve of the EU foreign ministers meeting in Luxembourg, where the military developments in Tripoli imposed itself forcefully on the meeting’s agenda, amid obvious and significant disagreements between France, Italy, and Britain.

A French diplomatic source, cited by AFP, on Monday has addressed the tense situation in Libya, reiterating its support for the GNA.

Speaking about the latest developments in Libya, a French diplomatic source, as quoted by AFP, has rejected allegations that Paris is on the side of Marshal Haftar, stressing that France wasn’t aware of his plans to start a military offensive targeting Tripoli.

As the source underlined, Paris is putting the GNA at the centre of the political process in Libya, explaining that they have tried to persuade Haftar not to launch a fresh military offensive.

Field Marshal Haftar was rehabilitated in 2016 by several countries, first and foremost France, especially because of his role in the fight against “terrorist groups” and illegal immigration.

Antonio Guterres, UN Secretary-General, on Monday strongly condemned the military escalation near Tripoli and called for an immediate halt to the fighting.

Guterres’ appeal followed an air attack by the forces of Khalifa Haftar on the Mitiga airport east of the capital.

Earlier UN Office for the Coordination of Humanitarian Affairs (OCHA) spokesperson Russell Geekie said that the number of displaced people fleeing from the fighting in Libya’s capital Tripoli had reached 3,400.

U.S. oil prices rose to their highest since Halloween on fears of a global supply squeeze due to fighting in Libya and the Trump administration’s decision to designate Iran’s Islamic Revolutionary Guard Corps a foreign terrorist organization.

International benchmark Brent futures touched their strongest level since last November at $71.34 per barrel on Tuesday, and were still at $71.16 at 0057 GMT, up 6 cents, or 0.1 percent, from their last close.