The U.S. is waging a total economic war on Iran:

The United States announced on April 22 it will no longer grant sanctions exemptions to eight countries, including Turkey.

“This decision is intended to bring Iran’s oil exports to zero, denying the regime its principal source of revenue,” the White House said in a statement.

“The Trump administration and our allies are determined to sustain and expand the maximum economic pressure campaign against Iran to end the regime’s destabilizing activity threatening the United States, our partners and allies and security in the Middle East,” it said.
…
Eight governments were initially given six-month reprieves from the unilateral U.S. sanctions on Iran. They were China, India, Japan, South Korea, Taiwan, Turkey, Italy and Greece.

Iran currently exports about 1 million barrels of oil per day. The current exemptions from unilateral U.S. sanctions end on April 30. Japan, South Korea and Taiwan are U.S. protectorates. They will do as told. Italy and Greece are less dependent and may show signs of resistance. India’s reaction depends on the outcome of its current election. China will probably not adhere to the U.S. command. Turkey needs Iranian oil and gas. It cannot [do] without it within a reasonable time frame. Iraq is most dependent on Iranian oil and gas which it needs to generate electricity. No electricity during the hot summer would likely lead to riots.

The U.S. Secretary of State, “we lie, we cheat, we steal” (vid) Mike Pompeo, set out 12 demands to Iran which sum up to demanding a total capitulation. Iran will of course not fulfill any of them. It is the U.S. which, without reason, again raised hostility against the country. Given its geography and capabilities Iran has no reason to fear any U.S. aggression.

Iran’s leader Ali Khamenei was not impressed by the sanction issue:

Speaking at a meeting with a large group of Iranian workers on Wednesday, Leader played down Washington’s recent decision to end exemptions from sanctions for countries buying oil from Tehran.

“In the first place, such attempts will lead nowhere, and we are capable of exporting as much oil as we need and want,” Ayatollah Khamenei said.

The Leader warned that “this act of hostility will not go unanswered,” emphasizing that the Iranian nation “will not sit idly by” in the face of its enemies.

After it withdrew from the international nuclear deal with Iran, the Trump administration made eight requests to start new negotiations. All of these were rejected. As the Russian government says, the U.S. is “not-agreement-capable”. The Iranian president has a similar view:

President Hassan Rouhani says Washington’s claims of seeking negotiations with Iran are “mere lies” and that the United States, in fact, intends to force the Iranian nation to its knees.

Contrary to what some are trying to promote, “the US does not possess the willingness for negotiations at all,” the president told a cabinet session in Tehran on Wednesday.
..
Rouhani said the US subversive measures against Iran have all failed on international, regional, and political arenas, and that its propagandist attempts targeting the Islamic Republic have all been defeated.

Washington has been and will likewise be frustrated in its anti-Iran economic drive, he added.

Some fear that the U.S. is preparing for war on Iran:

The Trump administration is laying siege to Iran. Taking pages from the Iraq War playbook, senior officials paint a picture of a rogue, outlaw, terrorist regime bent on acquiring nuclear weapons and whose “malign activities” are the cause of all the chaos in the Middle East. They know what they are doing. They have done it before. They are building a case for war.

The neoconservatives in the Trump administration may want to that. But it is not possible to wage war on Iran without causing a global depression. 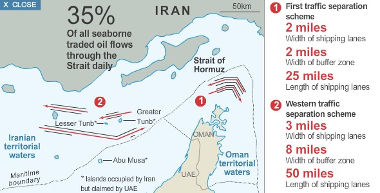 As the commander of the Iranian Revolutionary Guard Navy rightly points out, the Hormuz Strait, through which most Middle East energy exports flows, is under Iranian control:

“According to international law, the Strait of Hormuz is [an Iranian] waterway and we will close it [to other countries] in case we are banned from using it,” the Iranian military commander said.

“In case of any threat, we will not hesitate to support and defend Iran’s waters. We will defend our honor and will take reciprocal measures when it comes to protecting Iran’s rights,” he added.

While Iran will continue to sell some oil, the U.S. sanction threat will certainly reduce its customer base. Iran’s economy will suffer, but the country will, as always, muddle through. It will also keep up its relations to the other members of its ‘axis of resistance’. Hizbullah, Syria (and Iraq) will continue to receive support from Iran.

Saudi Arabia and the UAE are supposed to make up for the shortfall of oil in international markets. The Saudis were prepared for this when, a year ago, the Trump administration reintroduced oil sanctions on Iran. When it then announced that several countires would receive waivers,  the Saudis suddenly produced more than the market needed and the oil price dropped. They wowed at that time to not repeat that error. The Saudis also have to consider the OPEC quotas to which they and Russia agreed. Will they brake their quota or let the price rise? Trump is betting on the first. My guess is that he will lose that bet. 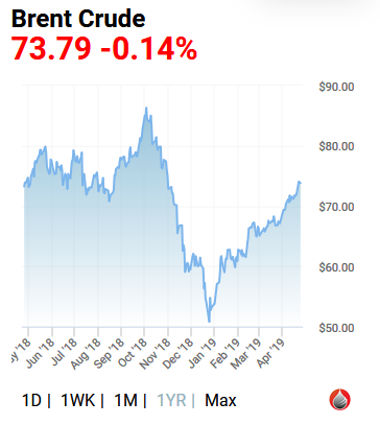 Gas prices in California are already at $4,70 per gallon. They will likely rise to $6,00 when the full sanctions against Iran set in while the Saudis sit back and appreciate their rising income.

Any unforeseen event, in Libya or elsewhere, that further constrains the global oil output, will make the costs unbearable for the U.S. consumer. The U.S. economy does not do well under high oil prices.

What is Trump going to do when he finds out that the rising prices, caused by the Zionist demand to subdue Iran, endanger his reelection?