The hideous public beheadings of 37 men in a single day in Saudi Arabia last Tuesday have provoked scant protest from Western governments and the corporate media.

The same newspapers and broadcast networks that have summoned up their moral outrage over abuses, both manufactured and real, by governments in Russia, China, Iran, Syria or Venezuela, are clearly unmoved by these criminal executions. They maintain their stony silence even as those who were decapitated with swords included three young men who were arrested as minors, tortured into signing confessions and convicted of “terrorism” for daring to join protests against the country’s monarchical dictatorship. 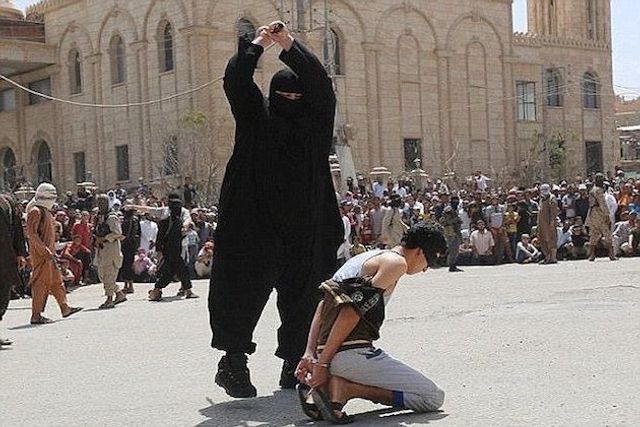 One of those beheaded was Abdulkarem al-Hawaj, arrested when he was just 16 by Saudi security forces for attending a protest in the country’s Eastern Province, home to most of Saudi Arabia’s Shia minority population. Beginning in 2011, the oil-rich province has seen protests over the systematic discrimination and oppression against Shias at the hands of a monarchy whose rule is bound up with the official, state-sponsored religious doctrine of Wahhabism, an ultra-conservative Sunni sect.

Abdulkarem’s real “crime” was apparently that of using social media to encourage participation in a demonstration. He was held in solitary confinement, beaten, tortured with electric cables and hung in chains by his wrists until he submitted to signing a false confession.

Also murdered in the barbaric execution spree was Mujtaba al-Sweikat, who was 17 when he was arrested at an airport as he was about to board a plane to the United States, where he was to become a student at Western Michigan University. His crime was also that of daring to demonstrate against the Saudi royal dictatorship.

His father, who represented him in a sham trial, accused the state of creating the “illusion” of a “terrorist cell”, where none existed. “He was subjected to psychological and physical abuse which drained his strength,” Sweikat’s father told the court. “The interrogator dictated the confession to Sweikat and forced him to sign it so that the torture would stop. He signed it.”

As in all the other cases, the court ignored the evidence of torture and forced confession and imposed the sentence of death by decapitation already dictated by the House of Saud.

The US government has said next to nothing about these atrocities. A State Department spokesman issued a boilerplate statement allowing that “We have seen these reports. We urge the government of Saudi Arabia, and all governments, to ensure trial guarantees, freedom from arbitrary and extrajudicial detention, transparency, rule of law, and freedom of religion and belief.”

During the same two days after the Saudi public beheadings, which included the crucifixion of one of the victims and the display of a severed head on a pike to intimidate anyone thinking of opposing the kingdom’s de facto ruler, Crown Prince Mohammed bin Salman, the same State Department managed to churn out statements condemning Russia for “gross human rights violations” in Chechnya, Venezuela for use of “intimidation and imprisonment” against the US-funded right-wing opposition and Havana for acting to “suppress the human rights of the Cuban people”.

Washington’s patent indifference to the mass executions in Saudi Arabia exposes the unmitigated cynicism and hypocrisy of all of US imperialism’s “human rights” pretensions and feigned outrage over alleged crimes carried out by governments that it views as strategic rivals or that it is seeking to overthrow. The United States has long counted Saudi Arabia as a pillar of imperialist domination and reaction in the Middle East, and the Obama administration exhibited a similar reaction to the mass execution of 47 men in January 2016.

But just as blatant as the complicity of the US government with the crimes of the Saudi regime, is the embrace of the bloody monarchical dictatorship by Wall Street and global finance capital.

In October of last year, a significant number of Wall Street moguls and chiefs of international finance houses canceled their trips to an annual Saudi investment conference known as “Davos in the Desert.” The gathering—which was attended by lower ranking operatives of their firms—came just weeks after the brutal murder and dismemberment of the well-known Saudi journalist Jamal Khashoggi at Saudi Arabia’s consulate in Istanbul.

A regime insider who had served as an aide to the Saudi intelligence chief and a semi-official interlocutor between the House of Saud and the Western media before falling out with Riyadh, Khashoggi’s grim fate at the hands of a Saudi military and intelligence death squad was traced by the CIA and other intelligence agencies directly to an order given by Crown Prince bin Salman.

While the death of the well-placed journalist, who had been given a column in the Washington Post after going into self-exile in the US, elicited a brief period of attention and protests from the US media and politicians, six months have passed, and the crime has largely been forgotten. US officials speak vaguely about the need for “accountability”, while studiously ignoring that the author of the grisly and brazen assassination is none other than their closest ally, bin Salman.

Six months was more than enough time for Wall Street to cast aside any inhibitions and jump with both feet into the latest Saudi “Financial Sector Conference,” which convened at the King Abdul Azziz International Conference Center. While its opening came in the immediate wake of the mass executions, the conference center is miles away from Riyadh’s Deera Square where the executioners hack off heads with swords, so the Wall Street CEOs did not have to worry about staining their Prada shoes with blood.

On May 4, the International Committee of the Fourth International is holding its annual International May Day Online Rally, with speakers and participants from throughout the world. Register today!

The mood at the conference was a reprise of the giddy reception that bin Salman received when he visited the US just a year ago, when he was embraced as a visionary and “reformer” by billionaires like Jeff Bezos, Bill Gates, Mark Zuckerberg and Oprah Winfrey. 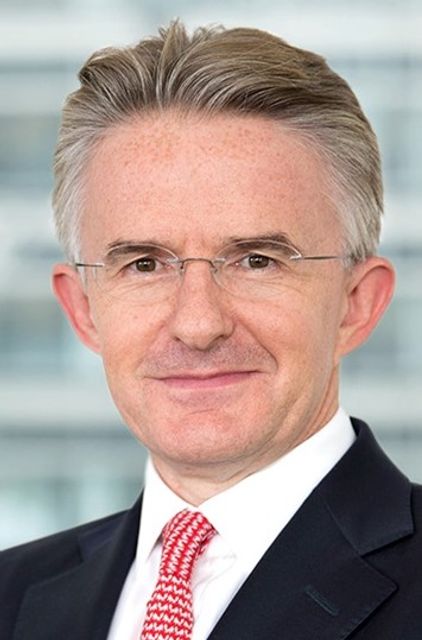 “We are excited about the role that we can play here,” HSBC CEO John Flint told this week’s Riyadh conference. “This is an economy we have a lot of confidence in. I think the future is bright.”

He boasted that a number of former HSBC bankers had joined the head-chopping Saudi regime. “That’s been a privilege of ours, to see so many of our ex-colleagues actually in the audience and serving their country now.”

Among the others attending at the conference were BlackRock Inc’s CEO Larry Fink, JPMorgan’s chief executive officer Daniel Pinto, the World Bank’s vice president for development finance Akihiko Nishio, as well as representatives of various other banks and hedge funds.

BlackRock’s Fink was among the most effusive. He brushed aside any qualms about the hideous crimes of the Saudi regime, which include not only this week’s mass executions and the assassination of Khashoggi, but the near-genocidal US-backed war that has killed tens of thousands of Yemenis and brought millions to the brink of starvation.

“The fact that there are issues in the press does not tell me I must run away from a place. In many cases, it tells me I should run to and invest because what we are most frightened of are things that we don’t talk about,” he stated, uttering not a word more about the “things we don’t talk about.”

The magnet pulling in all of the finance capitalist parasites is Saudi Arabia’s state-run oil company, Aramco, whose income equals that of the five biggest energy conglomerates in the world and tops the combined net profits of Apple and Google.

Many of the banks and finance houses represented in Riyadh, including JPMorgan, HSBC, Citigroup and Goldman Sachs participated this month in Aramco’s floating of $12 billion worth of bonds.

Saudi Energy Minister Khalid Al-Falih told the conference in Riyadh that Aramco’s bond sale was “only the beginning”, holding out the prospect that the oil giant may go for an initial public offering (IPO) as early as next year.

“There will be more,” he added. “I won’t tell you what and when, and it wo’’t be bonds only. Aramco sooner than you think will be accessing equity markets.” 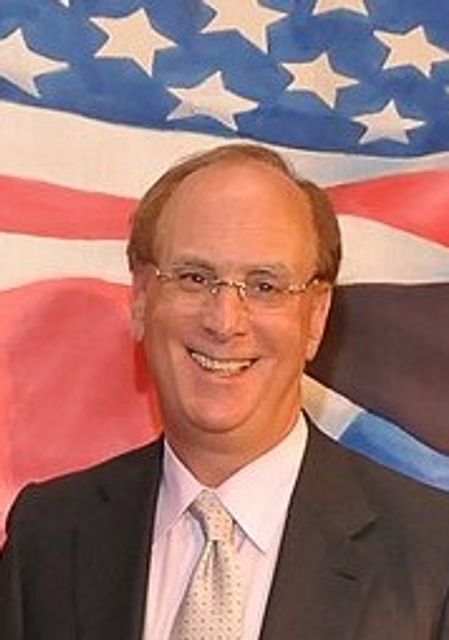 Blackrock’s Fink, who described “reforms” by the Saudi monarchy as “amazing”, said he saw “very large opportunities” across the Middle East, insisting that the region is “becoming more secure”.

To describe the Middle East, after a quarter century of US imperialist wars, whose victims number in the millions, and which have shattered entire societies, as “more secure” is delusional.

No doubt for Fink and his fellow financial oligarchs the mass beheadings of “terrorists” – a synonym for agitators, troublemakers and dissidents – is not a problem, but rather an attraction. They feel that the defense of their vast wealth under conditions of unprecedented social inequality and an increasingly combative working class will require similar measures at home and abroad.