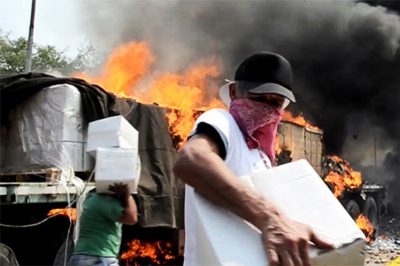 Who would have thought that, during the attempted coup d’état in Venezuela on January 23 and its immediate aftermath, Caracas would become, only five months later, the epicentre of the Latin American left? The XXV São Paulo Forum is planned for July 25–28 in the very Caracas that was supposed to be in the hands of the US and its allies. The day of the coup attempt, international hemispheric right-wing reaction – from the north, in Ottawa, through Washington, DC, to Bogotá and southward to Lima and Santiago de Chile – was ready to get the champagne bottles popping.

While capturing Venezuela’s oil was and obviously remains the objective, the destruction of Chavismo as an example and inspiration also was and remains a key consideration. It weighed heavily in the balance as the US and its allies launched their daring coup on January 23. It was not the first such direct US intervention in the country, the previous one having been launched against Chávez in his day.

However, this latest version was expected to be a sure winner for US imperialism. Everything was in place, including catapulting a “popular” new leader from the “grassroots,” who happened to be an actual elected member of parliament! This stroke of genius was apparently meant to replace the overtly capitalist Federation of Chambers of Commerce, which looked like a civilian Pinochet police lineup when they posed for a photo opportunity back in 2002.

No, this was to be a new version of a coup. This new face of imperialism had at its disposal a ready-made dream team coalition in the form of the Lima Cartel. The main original feature of this entity was that it did not include the universally detested Trump, who was replaced by his supposed political antithesis from Canada, Justin Trudeau, so as to give credibility to the Trump administration.

The massive use of international corporate media in an unprecedented demonization campaign against a leader, in this case Maduro, was supported “on the ground” by the foot soldiers of pro-US social media all over the planet. The Bolivarian resistance was fierce, and Maduro in particular exhibited nerves of steel and foresight.

The US and its allies in the hemisphere, and beyond from Old Europe, organized two more coup attempts and three electrical power grid failures in March, on top of the successive economic and diplomatic sanctions that had already caused 40,000 deaths by January 23. Despite the hardships and the tense situation, overtures to the armed forces to desert the government fell on deaf ears.

On the contrary, the civic–military alliance not only held its own but further developed its political/ideological and patriotic consciousness even as it spread further into the population. From January 23 to the present, millions of Chavistas have regularly shown support for THEIR revolution, expressing in a more convincing manner than the ballot box that Maduro is their legitimate president.

In the course of this resistance, the Bolivarian Revolution further developed its policy of combining revolutionary struggle (not trusting imperialism one iota, as Che put it), based on the principles thereof, with a search for a negotiated, peaceful political solution with the opposition – a brilliant example of revolutionary diplomacy.

In this context, and with São Paulo in mind, we should appreciate the work of the Bolivarian Revolution, Maduro and his entire leadership (e.g. Jorge Arreaza as a bilingual, globetrotting foreign minister) on another front: they are actively building ties with the left-wing anti-imperialist forces in the heartland of imperialism. Maduro, for example, personally and explicitly extended a hand on behalf of the Bolivarian Revolution to the left-wing forces in Washington who had courageously occupied the Venezuelan Embassy to protect it from pro-US forces.

To take another of many examples, the Venezuelan diplomatic missions in Canada did not hesitate to recognize the statements issued by Canadian unions in January and February, on behalf of their five million members, in support of Venezuela’s right to self-determination in the face of the Canadian government’s pro-Trump policy of interference.

This outreach is reciprocal, as the left in the capitalist countries – the US, Canada and the UK, in particular – have been flocking to Caracas since January to witness and report back in response to the massive disinformation campaign against Venezuela. This trend has become, in a manner of speaking, the 2019 digital version of the international brigades that went to support the Republican side in the Spanish Civil War.

When I had the opportunity to listen to Maduro in a small meeting with a foreign delegation on February 4, 2019, one of several significant points he made was that Venezuela is, despite itself, being forced onto the international stage as the international epicentre of anti-imperialism. And, of course, the Bolivarian Revolution is up to the challenge.

Since the coup attempt, they have openly fallen into the US narrative in which the elections of May 2018 were “deficient,” marred by “irregularities” and “manipulation,” and, of course, the idea that Maduro is an “authoritarian.” The US presents these people as the “reasonable” voice of the campaign against Venezuela, seeking sorely needed credibility for its manoeuvres in this way.

In return, the false friends continually pronounce the keywords (“fraudulent,” “authoritarian”) so as to retain their academic privileges and their access to the mainstream. The latent “critical support” evinced before January 23 has converged with the US narrative, retaining some left-wing rhetoric in a desperate attempt to maintain credibility.

As to the statement that, as a result of the Bolivarian Revolution, the left has moved more to the left, it is useful at times to investigate how the enemy regards this movement. After all, the empire is highly sensitive to the reinforcement of Chavismo as an undesired boomerang effect of its interference in Venezuela. Judging by an article in World Politics Review titled “Venezuela’s Crisis Is Drawing New Ideological Lines in Latin America,” the empire’s worst nightmare is coming true:

“It is no longer possible for Latin American leaders to issue fuzzy statements now that the Venezuelan opposition has declared Maduro an illegitimate president. When Juan Guaidó, the head of Venezuela’s National Assembly, declared himself interim president last month, it compelled every leader in the region to make their position regarding the government clear.”

On the other hand, this move to the left is also reflected in the fact that the courageous, principled left-wing forces in the US and Canada have actually expanded into new areas. In addition, and this is very important, the blatant media campaign against Venezuela has vastly strengthened their political consciousness.

It has likewise resulted in a flurry of new social media as well as a multifold increase in the use of already existing social media and alternative websites dedicated, among other causes, to the Bolivarian Revolution.

For those of us who follow alternative and Venezuelan media, the blatant lies are so frustrating that it results in even stronger resolve, and thus a more left-wing stand on important international issues as well as the domestic situation in the imperialist countries.

Thus, the choice of Caracas for the next SãoPaulo Forum is not an arbitrary decision. It is a natural and inevitable choice that is well deserved by Maduro and the millions of Chavistas who will welcome the progressive forces to the very city of Caracas that was supposed to have been occupied by the US and its allies.

When one is on the correct side of history, this is what happens. It is important to reflect on the historical importance of the five months subsequent to January 23, not only for Latin America, but also for the entire hemisphere and indeed the world, as the outcome in Latin America impacts all of humankind.

This article was first published in Spanish on Firmas Selectas Prensa Latina (Cuba).

Arnold August is a Canadian journalist and lecturer, the author of Democracy in Cuba and the 1997–98 Elections, Cuba and Its Neighbours: Democracy in Motion and Cuba–U.S. Relations: Obama and Beyond. He collaborates with many web sites, television and radio broadcasts based in Latin America, Europe, North America and the Middle East. Twitter  Facebook, His trilingual website:  www.arnoldaugust.com.

Featured image is from Prensa Latina