Janine Jackson interviewed CEPR’s Jake Johnston about Haiti for the November 1, 2019, episode of CounterSpin. This is a lightly edited transcript. 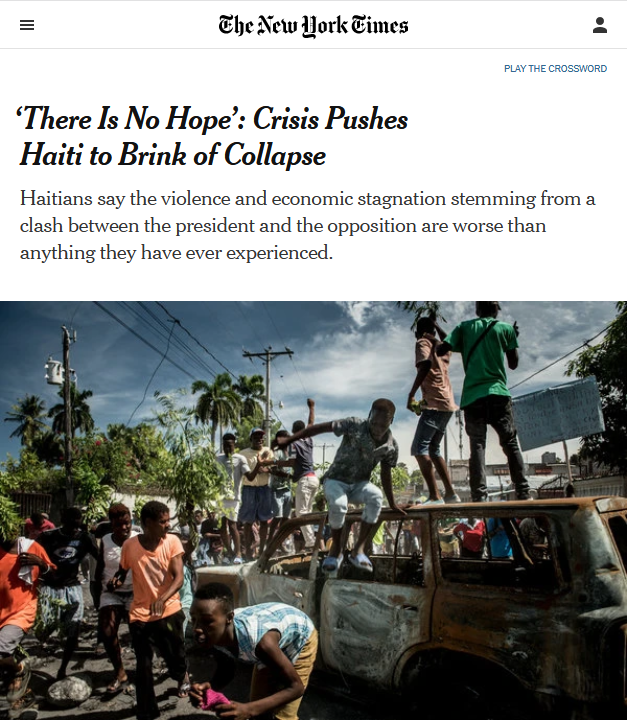 Janine Jackson: The New York Times chose to headline an October 20 report, “‘There Is No Hope’: Crisis Pushes Haiti to Brink of Collapse.” The phrase was a partial quote from a source, a despairing young woman in one of Haiti’s most difficult areas. And the story’s photos didn’t lie: people stepping cautiously through streets full of uncollected garbage, newborns in necessity-deprived hospitals. Nor did the facts: at least 30 killed and hundreds hurt in protests, schools closed to millions of children, layoffs and those with jobs going unpaid, roadblocks, blackouts, hunger and stress in a country in severe crisis. Deeper in the piece was another quote from the young woman’s mother, who, in tears along with her daughter, told the paper: “It’s not only that we’re hungry for bread and water. We’re hungry for the development of Haiti.”

As a point of emphasis, the difference between “there is no hope” and “there is no hope under this system” is crucial. So we should think about how media coverage can hinder, rather than help, that kind of conversation.

We’re joined now by Jake Johnston, senior research associate at the Center for Economic and Policy Research, and lead author for CEPR’s Haiti: Relief and Reconstruction Watch blog. He joins us now by phone from Washington, DC. Welcome back to CounterSpin,Jake Johnston.

Jake Johnston: Thanks for having me.

Jackson: Just to acknowledge, we can’t do justice to the history of Haiti here, but I think it’s fair to say, the more you know of it, the more sense you can make of what’s happening today. I wanted to just start with the question of the real scope or nature of these ongoing, and recently escalating, protests. It’s set up as President Moïse versus an opposition that wants him out. But you say that’s too narrow; it’s really bigger or deeper than that. What do you mean? 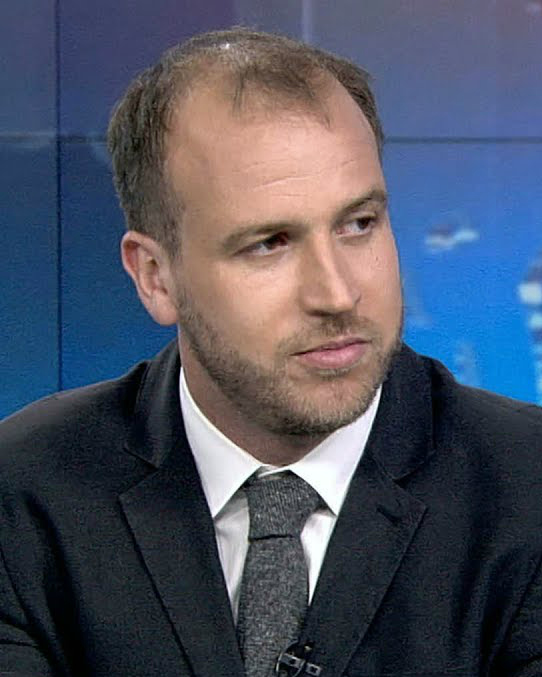 Jake Johnston: “What people are looking for is not just a change in leadership, not just to change from one politician to another, but real reforms that are going to fundamentally change the system of governance, and the economic system that has gone along with it.” (image: CGTN)

Johnston: There’s been this narrative, again, that you mentioned, that this is a fight between two political sides. And I think that is really taking a far too narrow view of this crisis, which is not just a month old, or two months old or a year old, but has been building for many years, maybe many decades, right? And this is really a systemic crisis. And I think what people are looking for is not just a change in leadership, not just to change from one politician to another, but real reforms that are going to fundamentally change the system of governance, and the economic system that has gone along with it. We’ve seen the failures of the democratic system, declining participation in elections for more than a decade, and an economic system that simply has produced inequality on a massive scale, and failed to address the needs that are so well pointed out in that New York Times article that you mentioned.

Jackson: Let’s do some history. We’ve complained countless times on this show about how elite US media can portray black and brown countries, and especially those deemed insufficiently pro-US, as “uncivilized” or “backward,” or, in fancier terms, “trapped for years in cycles of political and economic dysfunction.” When the role of outside actors like the US does come in, you need to look alive. So here’s this New York Times historical rendering. They say:

Haiti was once a strategic ally for the United States, which often played a crucial role here. During the Cold War, American governments supported—albeit at times grudgingly—the authoritarian governments of François Duvalier and his son, Jean-Claude Duvalier, because of  their anti-Communist stance.

In 1994, the Clinton administration sent troops to restore Jean-Bertrand Aristide to power after his ouster as president, but 10 years later, intense pressure from the United States helped push Mr. Aristide out again.

Now we can’t unpack all of that, obviously. But given that that was the only bit of US/Haiti relations that that story included—and it’s more than some stories have included—what are some key things to know about, specifically, the US role in Haiti and about that history?

Johnston: It’s good to see at least some acknowledgement of the important role that the US plays in Haitian politics, right? I think you look back after the fall of Duvalier and the early movement towards democracy, and you had the overwhelming election in 1990 of Jean-Bertrand Aristide. Focusing just on that coup that happened after that, just nine months into his term, and the fact that there were people on the CIA payroll who participated in the coup and participated in the bloody crackdown that followed, you can really see that as a transformative event that really put Haiti off the rails of democracy, and you’ve seen it further eroding over time.

And, again, you often look at the past when you’re talking about US policy. But I think what’s really important in today’s struggle, and what’s happening today, is taking a look at the more contemporary intervention of the US, and particularly in the 2010 election, where the US government alleged fraud on behalf of the government of René Préval and his chosen successor, and Hillary Clinton even came down to Haiti to force the government to overturn the results without any statistical analysis, and put Michel Martelly into the runoff election. And I think you can see the political fallout that has taken place in the now nearly 10 years since that intervention right there. And I think you’re seeing the collapse of that political system that really owes its power, and position in power, to the intervention of these foreign powers, including the United States.

Jackson: Well, it’s interesting, talking about today. We don’t need to get into how someone at the Times could bring themselves to type the words, “The Trump administration has urged respect for the democratic process.” But what we are seeing is calls from some folks within Haiti for involvement from the United States, and calls from a lot of folks for no involvement from the United States. If we’re talking about interventions from the outside world, other than reparations, what sort of involvement, if any, would the majority of Haitians even want from the US, or from the international community, at this point?

Johnston: Yeah, I think this is a key question. It looks like a bit of a paradox, right? I mean, how can you denounce intervention at the same time as, clearly, there’s an effort to sway international opinion in the current environment? And I think it actually makes quite a bit of sense. To think that that’s  straight-up hypocrisy assumes that the status quo is that the US is not playing a determinative role or a significant role in Haitian politics. I think it’s not so much further intervention that is needed, but rather taking their hands off of that system, reducing that intervention, to allow Haitians to actually create a path forward for change.

So often, international actors in Haiti have been the arbiters or the guarantors of the status quo. We’ve seen this concept of “stability” over and over again. I mean, there were 10,000 troops there in a “stability mission.” But what has the stability brought, and who is the stability for? This is stability for foreign investors, stability for the political and economic elite, stability for US politicians who don’t have to deal with the threat of migration or some crisis becoming a political issue for them. But it hasn’t been stability for the majority of the Haitian people. And I think that’s really the fundamental mis-analysis, if you will, of those international actors in Haiti, is that the stability that they’ve sought has only been of an unsustainable status quo. And I think that system is clearly collapsing right now.

Jackson: Let me just ask you one question about the “corruption” line, which is very prominent in the media coverage of Haiti today. When I read a gloss that says the government, the Moïse government, may have “misappropriated billions of dollars meant for social development projects,” I get an image of a benevolent and generous international community that graciously sent tons of social development money to Haiti, and that at that point corruption was introduced. And I’m not saying that there aren’t corrupt Haitian officials or elites, but the idea that we, the international community, gave and gave and gave a lot of assistance, but somehow when it got to Haiti, it got perverted…. What’s your reaction to that?

Johnston: That’s an excellent point. It’s a shame that it has to be said, but, of course, Haitians don’t have a monopoly on corruption. And if you look at the foreign aid system that we’ve set up and perpetuated, we, as the United States, the United Nations, as other international donors, etc., NGOs, this system that we’ve created is one that is inherently corrupt, in and of itself.

If you think about it, it’s really a system of legalized corruption, where, again, we’ve seen money go to expensive salaries, cars, lodging, security, back to head offices in Washington. When I was tracking money after the earthquake, what was so shocking was that I was in Washington, and yet most of the money was both allocated from Washington and ended up right back within the greater DC area.

And so you see this sort of corruption perpetuated on this international scale is often not thought of as corruption, because it’s the system we’ve created, and we’ve legalized, but in terms of wasting money, it’s probably a more efficient system at wasting money than what is traditionally thought of as corruption. It is, obviously, interesting, the focus of these corruption allegations in Haiti today, focus on a subset of foreign aid coming from the PetroCaribe program. Now, this was very different than other foreign aid in that it actually went to the government, as opposed to traditional aid, which, overwhelmingly, about 99% of it, bypasses the government entirely. And that’s actually a really unique way to approach aid, and something I think the aid community more broadly has coalesced around as a positive development, that you need to involve the local authorities, and that is only through putting money into these local authorities, and building up these institutions and capacities locally, that the issues of corruption will eventually be addressed.

And if you take even a further step back, and you look at the system, again, this foreign aid system that we’ve created, it has eroded the power of the state, and the financial capacity of the state, over many, many decades, again, by just bypassing the Haitian state and the Haitian institutions. And the result of that is a weak state that is more susceptible to corruption. And so I think even to the extent that there is local corruption, you also have to look at the international role in establishing the systems that facilitate that corruption.

Jackson: We’ve been speaking with Jake Johnston, senior research associate at the Center for Economic and Policy Research. You can find their work online at CEPR.net. Thank you, Jake Johnston, for joining us this week on CounterSpin.