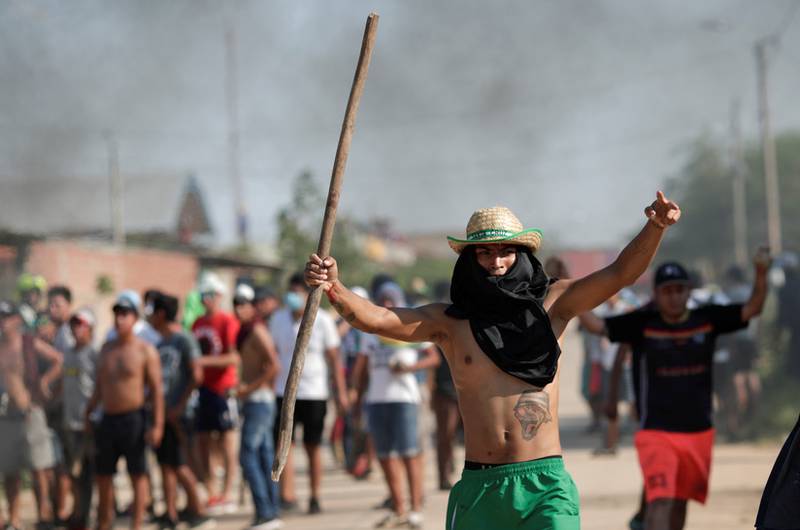 When the Bolivian political electoral process was oriented towards the institutional strengthening of radical democracy with the victory of Evo Morales in the October 20 elections, the head of a conspiracy appeared, in its most conservative forms of racism, hatred and violence against the Indians and the people, through the regional oligarchies headed by the Civic Committee of Cruceño and the losing candidate Carlos Mesa, both controlled by imperialism and its strategy of halting the process of national liberation and sovereignty that has developed in Bolivia in the last 14 years.

The face of the prepared coup d’état was unmasked two days after the elections, when the president of the Civic Committee of Cruceño, Luis Fernando Camacho, publicly proposed that Carlos Mesa, of Comunidad Ciudadana (CC), be sworn in as president of Bolivia and establish his government in Santa Cruz de la Sierra, ignoring the electoral results. His objective was to invent a “Bolivian Guaidó” that would be recognized by the U.S. and other countries, denouncing the existence of electoral fraud.

In spite of Camacho’s unsuccessful initial crude attempt, the tactic changed direction as several neoliberal political leaders, such as Carlos Mesa and Samuel Doria Medina, civic leaders such as Fernando Camacho and Marco Pumari of the Potosinista Civic Committee, and regional leaders such as the governor of Santa Cruz, Rubén Costas, met; and Tarija’s Adrián Oliva, who decided to form the Coordinadora de Defensa de la Democracia (CDD) and called for citizen resistance, which included high levels of violence, racism and insults against the popular population of Indians and Cholas.

The argument to justify the conspiracy plot began before the elections, when polls gave Evo Morales a broad advantage and the opposition and Donald Trump’s government were claiming fraud. With the official results of the vote of almost 7 million people who gave the presidential victory to the Movement Toward Socialism (MAS) of Morales, with 47.5% of votes, against 36.9% of votes of CC de Mesa, in the first round, a campaign in the media and on Internet networks was launched, with blockades and public marches, denouncing electoral fraud and demanding a second round or balotage.

Internally, the apparently independent CC party newspaper, La Prensa, and the international network CNN, became the channels for spreading lies, rumours and half-truths to create an atmosphere of uncertainty about election results and violent actions.

The international reaction was also present: the U.S. government and most of its allies in the Organization of American States (OAS), among them Brazil, together with the European Union (EU), declared themselves unaware of Morales’ victory in the first round, while the governments of Mexico, Venezuela, Cuba, China, Russia and more than 90 countries of the Non-Aligned Movement (Mnoal) recognized Morales’ and MAS’ victory. Argentina’s President-elect Alberto Fernandez congratulated the winner.

A third attempt to change the political trend and the electoral results was presented with the demand for a technical audit to be carried out by the OAS, which had a large delegation as election observers. This demand was channelled by the Minister of Foreign Affairs, Diego Pary, to carry out the aforementioned audit. However, in a radical change in Carlos Mesa’s position, he rejected the OAS initiative and proposed the annulment of the entire democratic electoral process, modifying his initial position and repeating Fernando Camacho’s arguments. 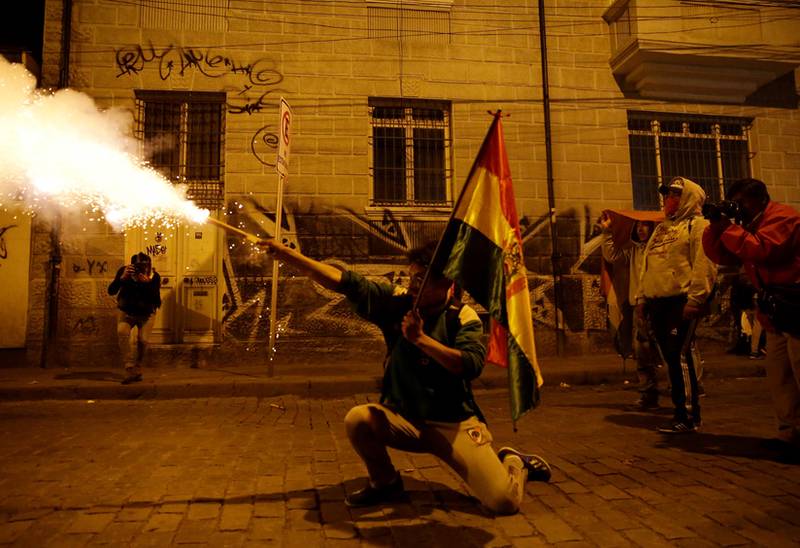 Confrontations and correlation of forces

The reason for this change was due to the fact that Mesa, who has had Gustavo Pedraza as vice-presidential companion, has become a prisoner of the sectors of the agro-industrial oligarchy and landowner of the East, represented by Camacho, since thanks to the vote of Santa Cruz the opposition candidate was able to reach an important place in the elections. Mesa won the vote in this department with 48.85%, followed by Morales with 34.76%, leaving behind the official candidate of the Santa Cruz oligarchy, Oscar Ortiz, from Bolivia Said No (BDN), who only got 9.42% of support.

This political movement of the opposition was accompanied by a mixed social mobilization among groups, families, students and youth from the middle and wealthy sectors of the central cities of La Paz, Cochabamba and Santa Cruz who expressed their disagreement with MAS and Evo Morales, with shock groups organized to violently attack people of ethnic appearance and indigenous dress or Chola, as happened in Santa Cruz, where they attacked merchants who rejected the blockades with firearms, or in Cochabamba, where motorcycle groups armed with sticks beat people from the peasant sectors.

CC’s elected deputy and journalist, Edwin Herrera, announced that the election results that gave MAS victory would generate widespread popular protest and lead to a civil war in Bolivia. It is recalled that in 2008 a situation of civil war arose when the oligarchies of the East (Santa Cruz and Pando) took up arms against the government, with paramilitary gangs seeking federalism and separatism, which were defeated by the peasant, urban-popular and colonizing movements.

In the correlation of social and political forces in the streets and highways, the massive actions of miners, peasants, peasant women, coca growers, neighbours, unions, transporters, intercultural and indigenous people from East and West managed to displace and subdue their adversaries who, including through the CDD, proposed to surround and take over the Casa del Pueblo in La Paz, where the offices of President Evo Morales operate. The symbol of this dispute was the entry of mining workers into the center of the capital, who, with a dynamite explosion, raised blockades and protests and imposed order in the city.

It should be noted that in the general vote, Morales had a 53.16% vote in the department of La Paz compared to 28.83% in Mesa, and in Cochabamba 57.52% compared to 32.21% in his adversary. MAS won in six departments and CC in three departments. And the legislative distribution gives MAS 21 senators and CC 15 senators, while MAS gets 68 deputies, CC 50 deputies, Christian Democratic Party (PDC), the surprise of the ultraconservative candidate of Korean origin Chi Hyun Chung, 8 deputies and BDN 4.

The political polarization has revealed the scope of the opposing positions: on the one hand, the restoration of neoliberalism, promoted by the local oligarchies together with the strategic alliance with the United States, that conspire against the Morales government and its reelection, and on the other hand the essential deepening of the national-popular and anti-imperialist process that no longer makes concessions to internal and external economic powers and develops the strengths of popular power in the economy and politics, with participative democracy and social control, promoting at the same time the project of unity and emancipatory integration of Latin America and the Caribbean.