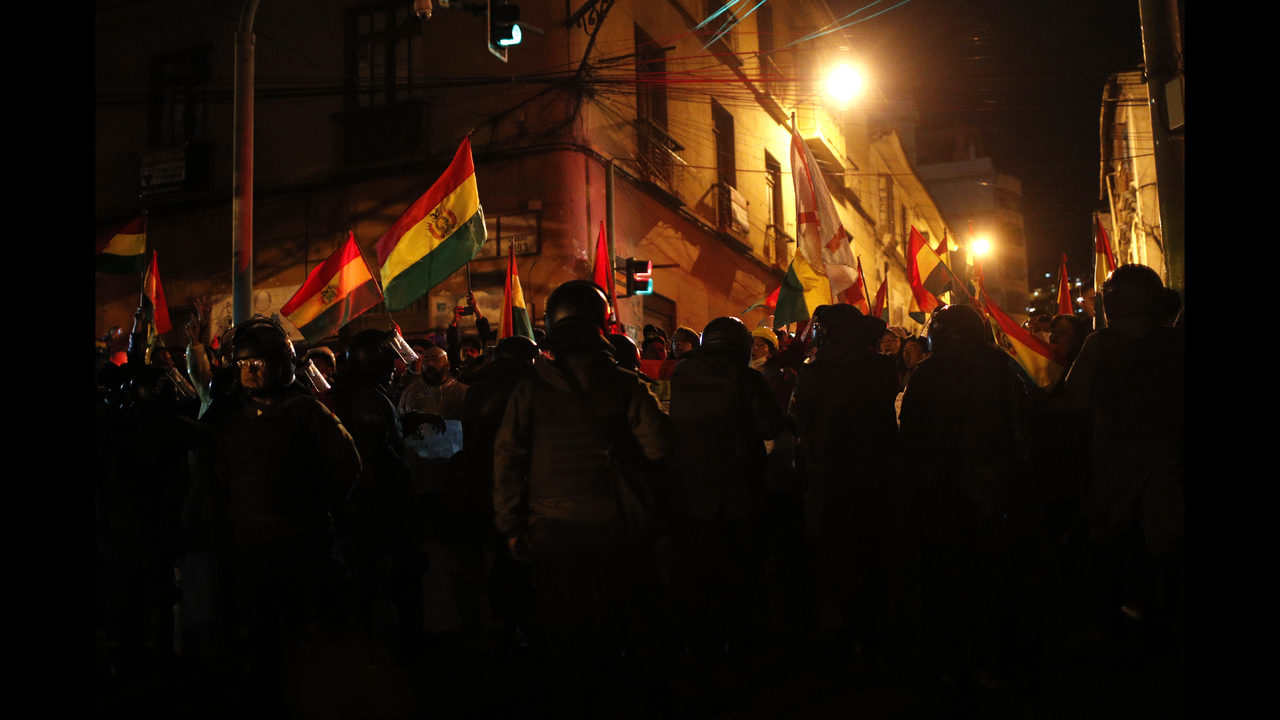 One of the objectives of the offensive is to have managed to gather all the formations of confrontation, and to reinforce the mobilization with sectors coming from different points of the country to La Paz.

These are days and hours of coup offensive in Bolivia. The attempt to overthrow President Evo Morales is gaining strength, territory and capacity for action. Like an announced bullet that arrives from the front and has a date: before next Tuesday.

That day the country will know the result of the audit in which the Organization of American States (OAS) participates, if there has been fraud in the October 20 elections that gave Morales victory in the first round. Those who are in the leadership want an outcome before that day, they believe they can achieve it.

They have several elements in their favor.

First,  a mobilized social base with a perception of triumph, heterogeneous, that gathers accumulated discontents with the emergence of exclusive, racist discourses and acts of the conservative/colonial country. That base has strength in Santa Cruz, Cochabamba, Potosí, and in La Paz, the final objective of the assault.

Second, shock groups that accumulated force from the east to La Paz. Their displacement followed the direction of the coup’s accumulation: Santa Cruz as a strategic rearguard, the center of the country as an area where they carried out the most violent trials, and La Paz as a point of definition of power. These groups are in the process of mobilizing towards La Paz, where some have already carried out siege exercises on the government palace in previous nights. One of the objectives of the offensive is to have managed to gather all the formations of confrontation, and to reinforce the mobilization with sectors coming from different points of the country to La Paz.

Third, the leadership of Fernando Camacho, who went from heading the Santa Cruz Civic Committee to establishing its base of operations in La Paz and projecting a national leadership. His discourse seeks to distance himself from all acts of racism, separatism and coup d’état, in an attempt to shift the accusations and add other sectors of society.

The deployment of these three factors seeks to unleash, through an escalating offensive, the rupture of three others.

The first point to be achieved, and which has been achieved in part, is the Bolivian National Police. The images of riots on Friday night and Saturday morning show how the most unstable weapons sector was touched and added – not always in a linear manner – to the coup process.

Secondly, the Bolivian Armed Force, the central element for a coup outcome. Until the hours of Saturday at noon there has been no public sign of a possible internal breakdown.

The calculation of this set of factors, articulated among themselves and thrown with the greatest force, has constructed a scenario in which the coup leadership affirms that the departure of Evo Morales is the only possible solution and that this will take place in a matter of hours or days.

Within this leadership, Carlos Mesa, who came second on October 20 and aligned himself with the ultimatist narrative, should also be placed in a plane of lesser protagonism. Both Mesa and Camacho reject the audit and a possible second round, but, while Santa Cruz burns all the bridges, the first seems to keep room for maneuver in case of defeat of the escalation.

The objective of the government, both of the presidency and of the social movements, seems to be to contain the escalation of the coup until the result of the audit. Within this framework, mobilizations have taken place almost daily, led by different organizations, such as the Central Obrera Boliviana and the Bartolina Sisa Women’s Confederation.

The president’s call has been to defend the votes, the process of change, democracy, without opening the doors to the scenario of confrontation that the right wing seeks to generate, as Evo has denounced that there are wounded, dead, and increasingly acute violence.

It is a complex and increasingly unstable scenario. The result of the audit could lead to different conclusions. One of them could be the recognition that there has been no fraud, but that a second round would be necessary, something that the OAS has already affirmed after the first round.

The United States, which denounced from the outset that the result of October 20 had not been valid, has affirmed that the path of the audit arbitrated by the OAS should be followed, that is, to a large extent, by themselves.

The United States, which from the very first moment denounced that the result of October 20 had not been valid, has affirmed that the path of the audit arbitrated by the OAS must be followed, that is, in large part, by themselves.

There are still many hours until Tuesday within this offensive framework that accumulates strength and capacity for destabilization. The government, the process of change, still has cards to play in order to contain and de-escalate the situation.

One thought on “The Hours of a Coup Offensive in Bolivia”