[As always, Moon of Alabama’s preliminary analysis of flight PS 752 that crashed after takeoff from Tehran’s airport, reveals the vast gulf between so-called mainstream media coverage of events and the reality. WB]

Reuters asks: “Who Ya Gonna Believe Me Or Your Lying Eyes?”

The trustworthy (not) news agency tweeted this yesterday: 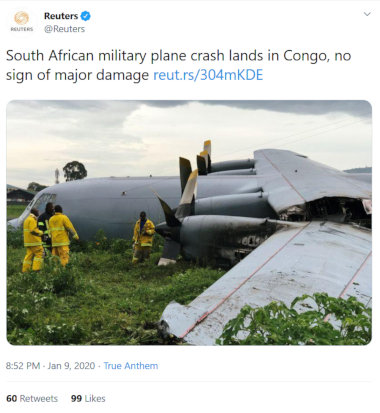 The crashed South African plane is pretty obviously a total loss but Reuters says that there is “no sign of major damage”.

Reuters is a British agency and Brits do have a special kind of humor: “Tis but a scratch” and “Just a flesh wound” says the black knight (vid).

The Reuters tweet was not a mistake. The story on Reuters’ website (screenshot) carries the same picture and headline.

The capture under the picture says:

The text of the article says:

Videos on social media showed smoke rising from the airplane but two sources at the airport, speaking on condition of anonymity, said there did not appear to be major damage to the plane.

At least five Reuters people contributed to the story. The claim by the two sources it cites is obviously false. It still made it into the story and even into the headline. Twenty four hours later, even after it was mocked on Twitter, the story is still up.

Consider the above when you read reports in which anonymous officials allege that Iran shot down the Ukrainian flight PS 752 over Tehran.

That may have happened. But that is only one possible explanation for the accident. The crash may have been caused by technical or other issues. Rumors and assertion from anonymous official are not evidence. Neither are videos of unknown provenance. The U.S. is waging an economic war on Iran and it has the will and the ways and means to fabricate such allegations. We will only know for sure what happened when the real evidence has been investigated by the designated authorities.

Some of the comments to yesterday’s piece on the accident disagreed with my warning that the purported evidence of a shoot down is yet insufficient and that other causes are very well possible. They should consider the warning from the top of the International Civil Aviation Organization (ICAO):

ICAO is in contact with the States involved and will assist them if called upon.

in accordance with Annex 13 of the Convention on International Civil Aviation (Chicago Convention).

The warning was repeated yesterday:

until the Annex 13 investigation is permitted to be concluded and its official results are confirmed.

Meanwhile the bodies have been removed from the crash site and the debris has been been collected and sorted by type.

This morning the head of the Iranian Civil Aviation Administration gave a press conference (vid) based on what the officials currently know. My impression is that he is a serious and reasonable person. The Aljazeerah English live translation was not good. None of the questions were translated but some of official’s points were understandable:

Then followed an explanation for the delayed departure of the plane:

It is then said that the investigation may extend a long time, even longer than the usual one year. Depending on their condition the extraction of data from the blackboxes may also take a month or two. The press conference ends with a request for calm and for support of the investigation.

Footage of the unopened blackboxes was aired on Iran TV. They seem to have minor outer damage but I am confident that the permanent memory within them is intact.

Investigators and observers from several countries and from Boeing have joined their Iranian colleagues and will help to find the causes of the accident.

Ukrainian investigators have arrived and have been at the crash site. There are laments (ukr) from anonymous Ukrainian officials that the Iranians “bulldozed” the debris:

“Debris is being raked by bulldozers; is Iran interested in a quality investigation?” – source in the interdepartmental commission of Ukraine.

The Iranians used a wheeled front loader to help collect the heavy parts of the debris. That is hardly bulldozing. 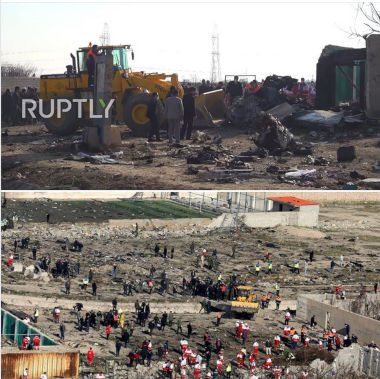 There are also laments that the collection process is too fast and may damage some parts. Well, the plane crashed and there was a large fuel explosion. There will hardly be any undamaged parts.

The crash site of the Ethiopian MAX that came down last years was also cleaned within three days. Sorting the parts into big heaps (structure, engines, electronics) before driving them off for storage and analysis is unlikely to cause additional damage. Meanwhile in the Ukraine one can still find parts of flight MH17 at very the place where that plane came down.

One thought on “Update On The Ukrainian Plane Incident Near Tehran”