In Thursday’s separate hearing on allowing Assange out of the armoured box to sit with his legal team, I witnessed directly that Baraitser’s ruling against Assange was brought by her into court BEFORE she heard defence counsel put the arguments, and delivered by her entirely unchanged.

Mark Summers QC outlined that in the case of Belousov vs Russia the European Court of Human Rights at Strasbourg ruled against the state of Russia because Belousov had been tried in a glass cage practically identical in construction and in position in court to that in which Assange now was. It hindered his participation in the trial and his free access to counsel, and deprived him of human dignity as a defendant.

Summers continued that it was normal practice for certain categories of unconvicted prisoners to be released from the dock to sit with their lawyers. The court had psychiatric reports on Assange’s extreme clinical depression, and in fact the UK Department of Justice’s best practice guide for courts stated that vulnerable people should be released to sit alongside their lawyers. Special treatment was not being requested for Assange – he was asking to be treated as any other vulnerable person.

The defence was impeded by their inability to communicate confidentially with their client during proceedings. In the next stage of trial, where witnesses were being examined, timely communication was essential. Furthermore they could only talk with him through the slit in the glass within the hearing of the private company security officers who were guarding him (it was clarified they were Serco, not Group 4 as Baraitser had said the previous day), and in the presence of microphones.

Baraitser became ill-tempered at this point and spoke with a real edge to her voice. “Who are those people behind you in the back row?” she asked Summers sarcastically – a question to which she very well knew the answer. Summers replied that they were part of the defence legal team. Baraitser said that Assange could contact them if he had a point to pass on. Summers replied that there was an aisle and a low wall between the glass box and their position, and all Assange could see over the wall was the top of the back of their heads. Baraitser said she had seen Assange call out. Summers said yelling across the courtroom was neither confidential nor satisfactory. 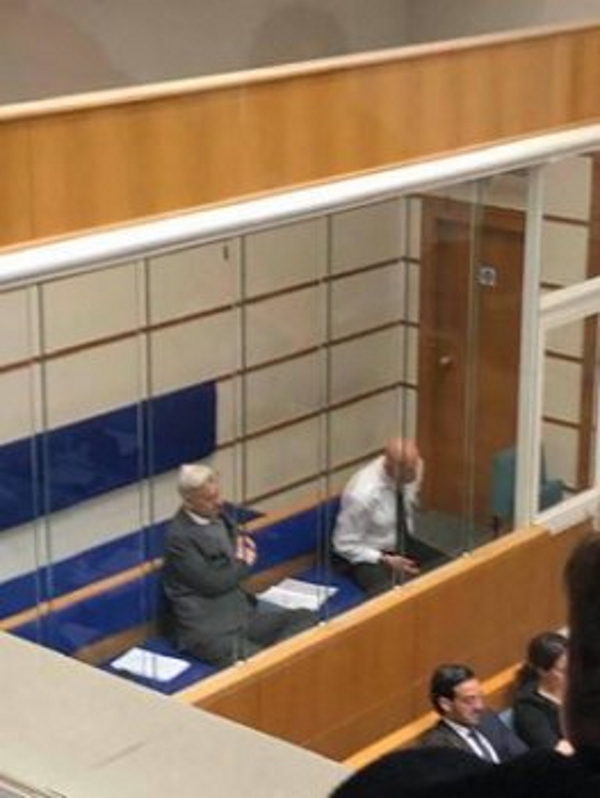 This is the photo taken illegally (not by me) of Assange in the court. If you look carefully, you can see there is a passageway and a low wooden wall between him and the back row of lawyers. You can see one of the two Serco prison officers guarding him inside the box.

Baraitser said Assange could pass notes, and she had witnessed notes being passed by him. Summers replied that the court officers had now banned the passing of notes. Baraitser said they could take this up with Serco, it was a matter for the prison authorities.

Summers asserted that, contrary to Baraitser’s statement the previous day, she did indeed have jurisdiction on the matter of releasing Assange from the dock. Baraitser intervened to say that she now accepted that. Summers then said that he had produced a number of authorities to show that Baraitser had also been wrong to say that to be in custody could only mean to be in the dock. You could be in custody anywhere within the precincts of the court, or indeed outside. Baraitser became very annoyed by this and stated she had only said that delivery to the custody of the court must equal delivery to the dock.

To which Summers replied memorably, now very cross “Well, that’s wrong too, and has been wrong these last eight years.”

Drawing argument to a close, Baraitser gave her judgement on this issue. Now the interesting thing is this, and I am a direct eyewitness. She read out her judgement, which was several pages long and handwritten. She had brought it with her into court in a bundle, and she made no amendments to it. She had written out her judgement before she heard Mark Summers speak at all.

Her key points were that Assange was able to communicate to his lawyers by shouting out from the box. She had seen him pass notes. She was willing to adjourn the court at any time for Assange to go down with his lawyers for discussions in the cells, and if that extended the length of the hearing from three to six weeks, it could take as long as required.

I have been wondering why it is so essential to the British government to keep Assange in that box, unable to hear proceedings or instruct his lawyers in reaction to evidence, even when counsel for the US Government stated they had no objection to Assange sitting in the well of the court.

The answer lies in the psychiatric assessment of Assange given to the court by the extremely distinguished Professor Michael Kopelman (who is familiar to everyone who has read Murder in Samarkand):

“Mr Assange shows virtually all the risk factors which researchers from Oxford
have described in prisoners who either suicide or make lethal attempts. … I
am as confident as a psychiatrist can ever be that, if extradition to the United
States were to become imminent, Mr Assange would find a way of suiciding.”

The fact that Kopelman does not, as Baraitser said, specifically state that the armoured glass box is bad for Assange reflects nothing other than the fact he was not asked that question. Any human being with the slightest decency would be able to draw the inference. Baraitser’s narrow point that no psychiatrist had specifically stated he should be released from the armoured box is breathtakingly callous, dishonest and inhumane. Almost certainly no psychiatrist had conceived she would determine on enforcing such torture.

So why is Baraitser doing it?

I believe that the Hannibal Lecter style confinement of Assange, this intellectual computer geek, which has no rational basis at all, is a deliberate attempt to drive Julian to suicide. The maximum security anti-terrorist court is physically within the fortress compound that houses the maximum security prison. He is brought handcuffed and under heavy escort to and from his solitary cell to the armoured dock via an underground tunnel. In these circumstances, what possible need is there for him to be strip and cavity searched continually? Why is he not permitted to have his court papers? Most telling for me was the fact he is not permitted to shake hands or touch his lawyers through the slit in the armoured box.

They are relentlessly enforcing the systematic denial of any basic human comfort, like the touch of a friend’s fingertips or the blocking of the relief that he might get just from being alongside somebody friendly. They are ensuring the continuation of the extreme psychological effects from isolation of a year of virtual solitary confinement. A tiny bit of human comfort could do an enormous amount of good to his mental health and resilience. They are determined to stop this at all costs. They are attempting to make him kill himself – or create in him the condition where his throttling death might be explained away as suicide.

This is also the only explanation that I can think of for why they are risking the creation of such obvious mistrial conditions. Dead people cannot appeal.

I would remind you that Julian is a remand prisoner who has served his unprecedentedly long sentence for bail-jumping. His status is supposedly at present that of an innocent man facing charges. Those charges are for nothing except for publishing Chelsea Manning’s revelations of war crimes.

That Baraitser is acting under instructions seems to me certain. She has been desperate throughout the trial to seize any chance to deny any responsibility for what is happening to Julian. She has stated that she has no jurisdiction over his treatment in prison, and even when both defence and prosecution combined to state it was normal practice for magistrates to pass directions or requests to the prison service, she refused to accept it was so.

Baraitser is plainly attempting psychologically to distance herself from any agency in what is being done. To this end she has made a stream of denials of jurisdiction or ability to influence events. She has said that she has no jurisdiction to interfere with the strip searching, handcuffing and removal of Assange’s papers or with his being kept in solitary. She has said she has no jurisdiction to request that his defence lawyers have more access to their client in jail to prepare his defence. She has said she has no jurisdiction over his position in the courtroom. Se has suggested at various times it is up to Serco to decide if he may pass notes to his lawyers and up to Group4 to decide if he can be released from the armoured dock. The moments when she looks most content listening to the evidence, are those when prosecution counsel James Lewis argues that she has no decision to make but to sign the extradition because it is in good form and that Article 4 of the Treaty has no legal standing.

A member of the Assange family remarked to me at the end of week one that she seems very lazy, and thus delighted to accept any arguments that reduce the amount she needs to do. I think it is different to that. I think there is a corner of the mind of this daughter of dissidents from apartheid that rejects her own role in the torture of Assange, and is continually urging “I had no choice, I had no agency”. Those who succumb to do evil must find what internal comfort they may.

With grateful thanks to those who donated or subscribed to make this reporting possible. I wish to stress again that I absolutely do not want anybody to give anything if it causes them the slightest possibility of financial strain.

This article is entirely free to reproduce and publish, including in translation, and I very much hope people will do so actively. Truth shall set us free.