It’s official and we won: Conventionally-bred animals and plants are not patentable. [1] It may seem obvious to us, but corporations like Bayer (buyer of Monsanto), Syngenta and Carlsberg fought hard against this outcome. Without a patent, they cannot control and profit from the biological information in those plants and animals!

This is a story of success and a story of people working together hand in hand. You are part of this story: you signed one of our petitions, maybe shared our call to action, or even donated to make it happen. We’re so pleased to walk you through some of the exciting highlights:

In 2016 we joined the predominantly German campaign against patents on broccoli, tomatoes, barley and salmon. We quickly mobilised across borders and made the campaign a truly collaborative effort. A couple of months later a broad alliance of organisations delivered 800,000 signatures saying “no” to patents turning natural organisms into the private possessions of multinational corporations. [2] 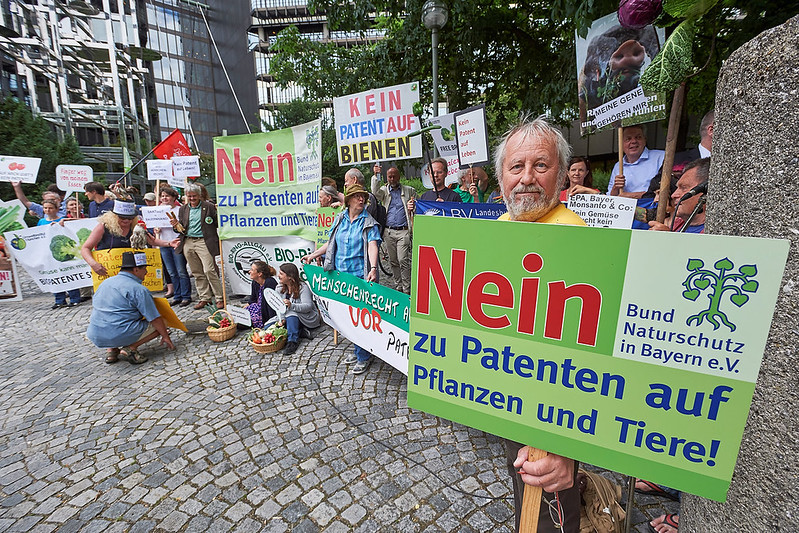 In the summer of 2016, farmers, gardeners and activists delivered 800,000 signatures from all over Europe against patents on plants and animals to the European Patent Office in Munich.

A petition wasn’t enough to get noticed at the European Patent Office (EPO), so we organised the largest official objection against a patent the EPO had ever seen. With partners we filed almost 65,000 complaints against a patent on a tomato, signed by citizens from all over Europe. This was huge – the EPO was so overwhelmed they couldn’t take them all in at once. [3]

In June 2017, we confronted the EPO with a protest directly in Munich, where they are based. Munich is all famous for their beer and tradition in brewing. Munich has the Oktoberfest, a beer festival and fair with millions of people pouring into the city. We started a campaign against a patent on barley, brewing and beer and delivered our protest in a beer wagon, pulled by the traditional 6 carriage horses. [4] 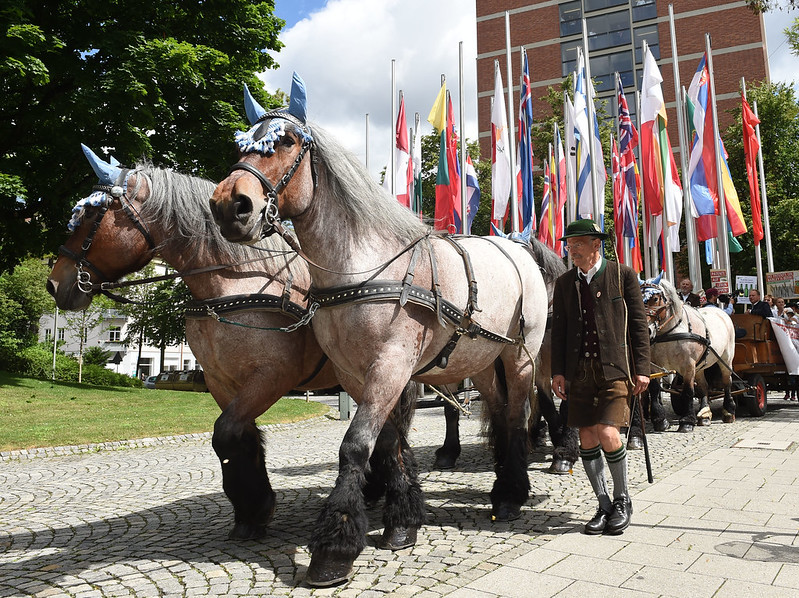 Delivering of hundreds of thousands of signatures in summer 2017 against a patent on barley, brewing and beer Carlsberg company applied for. In the background: the office building of the European Patent Office.

Then in July 2017 we already saw a huge win in Brussels. The European Union made it explicitly clear that plants and animals are not the inventions of mankind, but of nature and therefore are a common good. [5] Stubbornly, the EPO refused to accept the decision but at least put all pending patent applications on hold. Still they accepted new applications for patents on plants and animals.

To keep the pressure up we returned to Munich a year later, in September 2019, to welcome thousands of beer fans streaming to the Oktoberfest. They have to walk directly through a courtyard of the European Patent Office. Our community crowdfunded thousands of flags calling for no patents on beer. WeMove volunteers and activists handed out the flags and we turned the stream of people into a demonstration. [6] 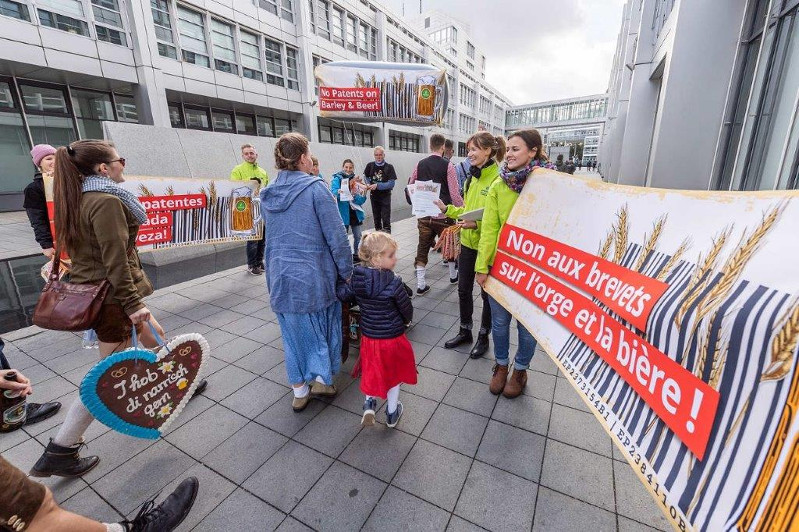 Beer fans on their way to the Oktoberfest passing by the EPO and welcomed by activists in four languages. Thousands of flags made it a demonstration for no patents on beer, brewing and barley.

Finally, in summer 2019, we joined a broad coalition of environmental and farming organisations to showcase it’s not only an issue with plants, but also with various animals like pig, sheep and different species of fish. Together we filed an open letter and an official complaint against a patent on salmon. [7] 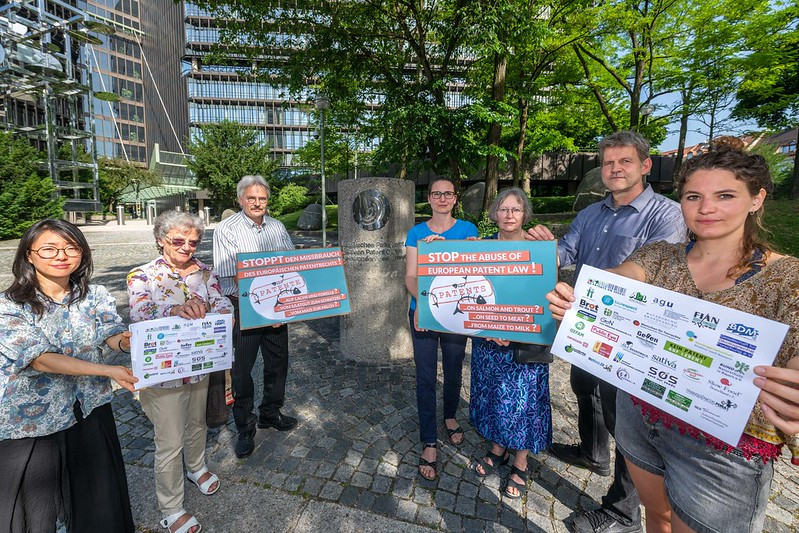 Summer in Munich again. Activists of a broad coalition are calling for an end of patents on plants and animals and handing in our open letter against a patent on salmon.

This is our side of the story. On the other side you can be certain corporations were fighting tooth and nail, lobbying, spending a lot of money to beat us. But just last week the Enlarged Board of Appeal, the highest legal body of the European Patent Office published their legal opinion. On 14 May 2020 we won. We hope the decision will help to put an end to a decade of complete legal absurdity and chaotic decision-making at the EPO.

So often, when we win are celebrating the combination of good arguments, strong and experienced partners and the broad international mobilisation of people power. It is People power that we – the WeMove Europe community – can contribute to the movement. This success is all thanks to every one of us: adding our signatures, sharing our calls to action with family and friends, and donating when we can.

Our special thanks go to our partners, Save Our Seeds and Campact. In 2016 Campact invited us to join the campaign when they realised that this was an issue that could only be solved on the European level.

Save Our Seeds is the true driver of this campaign. It’s thanks to their expertise and persistent research that we had all the information at the right moments to mobilise across borders and change decisions that impact us all.

It’s always satisfying to celebrate a win, but we also know how strong the interests of corporations are. They will search for loopholes. We have to be on the watch, and we will need your voice again. If you can afford to donate a small amount today, it will be a huge help for our next fight against corporate power. Can you chip in?

References:
[1] This is the result of a verdict published on 14 May 2020 by the Enlarged Board of Appeal, the highest legal body of the European Patent Office (EPO)
https://www.epo.org/law-practice/case-law-appeals/communications/2020/20200514.html
[2] https://www.morgenpost.de/politik/article207750349/Gegen-Patent-auf-Gemuese-800-000-Unterschriften-uebergeben.html
[3] https://taspo.de/kategorien/syngenta-einspruch-gegen-tomaten-patent/
In the end Syngenta withdraw their application for the patent on a tomato: https://www.slowfood.de/aktuelles/2019/nach-masseneinspruch-syngenta-patent-auf-tomaten-widerrufen
[4] https://act.wemove.eu/campaigns/no-patents-on-beer and https://www.br.de/nachrichten/bayern/protest-vor-muenchner-epa-gegen-patentvergabe-auf-braugerste,6ct32e9m6cvk0chh6ww32c1k68wkc
[5] https://european-seed.com/2017/07/european-patent-office-follows-eu-wishes-limits-patents-plants/
[6] https://www.gen-ethisches-netzwerk.de/biopatente/wem-gehoert-das-bier
[7] https://www.bioecoactual.com/en/2019/07/08/opposition-against-patent-on-salmon-and-trout/