This from the Washington Post is surprisingly good news:

Biden will withdraw all U.S. forces from Afghanistan by Sept. 11, 2021

President Biden will withdraw all American troops from Afghanistan over the coming months, people familiar with the plans said, completing the military exit by the 20th anniversary of the Sept. 11, 2001, attacks that first drew the United States into its longest war.

The decision, which Biden is expected to announce on Wednesday, will keep thousands of U.S. forces in the country beyond the May 1 exit deadline that the Trump administration negotiated last year with the Taliban, according to one person familiar with the matter, who like others spoke on condition of anonymity to describe plans that are not yet public.

While the Taliban has vowed to renew attacks on U.S. and NATO personnel if foreign troops are not out by the deadline, it is not clear if the militants will follow through with those threats given Biden’s plan for a phased withdrawal between now and September.

The decision comes after a U.S. initiative to press for a unity government in Afghanistan only created more dead end proposals and was likely to fail.

The initiative was to include Turkey, India and others to create a complicated plan of power sharing in Kabul. The larger strategic thought behind that plan was to keep Afghanistan as a base from where the U.S. could harass China. Turkey’s role under the plan was to organize jihadist Uighur fighters which would be trained in Afghanistan and elsewhere to then get inserted into Xinjiang to interrupt the Belt and Road Initiative projects that run through that area:

Pentagon and CIA are reluctant to vacate Afghanistan by May 1. Turkey will be overseeing an open-ended US-NATO presence. The US hopes to retain a strong intelligence presence backed by special operations forces. A report Friday in the CNN disclosed that “CIA, which has had a significant say in US decision-making in Afghanistan, has “staked out some clear positions” during recent deliberations, arguing in favour of continuing US involvement.”

The scale of the CIA activities in Afghanistan are not in public domain — especially, whether its regional mandate extends beyond the borders of Afghanistan. The CNN report cited above lifted the veil on “one of the most heavily guarded bases” of the CIA — Forward Operating Base Chapman, “a classified US military installation in eastern Afghanistan.”

Suffice to say, given the presence of the ISIS fighters (including those transferred from Syria to Afghanistan — allegedly in US aircraft, according to Russia and Iran) — the nexus between the Taliban and al-Qaeda, and above all, the presence of Uighur, Central Asian and Chechen terrorists, Turkey’s induction as the US’ buddy in Afghanistan is indeed worrisome for regional states. Turkey has transferred jihadi fighters from Idlib to Libya and Nagorno-Karabakh to fight hybrid wars.

Significantly, Turkey has abruptly shifted its stance on the Uighur issue after years of passivity and hyped it up as a diplomatic issue between Ankara and Beijing. China’s ambassador to Ankara was summoned to Turkey’s Foreign Ministry last Tuesday.
…
China and Russia are vigilant about the US intentions in Afghanistan. (See my blog China resents US presence in Afghanistan.) And both have problematic relations with Erdogan. Turkey’s ascendance on the Afghan-Central Asian landscape cannot be to their comfort. During his recent visit to Tehran, China’s State Councilor and Foreign Minister Wang Yi voiced support for Iran’s membership of the Shanghai Cooperation Organisation. The Russian Foreign Minister Sergey Lavrov is due to visit Tehran on April 14.

This week Turkey was supposed to host a meeting between the Afghan government and the Taliban. But yesterday the Taliban announced that they would not take part in it:

Afghanistan’s Taliban said it can’t participate in a peace conference in Istanbul slated for April 16 that had been aimed at reaching a political agreement between the country and the Taliban militants.

“Our current position is that we can’t participate in the conference during that date, although the Istanbul conference is still under our consideration,” the Islamic group’s spokesman Mohammad Naeem said in a text message, without providing further details.

Behind the Taliban stands Pakistan. It is there where Russia and China pulled strings to sabotage the U.S. plans:

While Lavrov’s overt mission was to court Pakistan’s support for Russia’s new bid to promote a political settlement in war-torn Afghanistan, his unspoken agenda focused on indications the US will delay its avowed withdrawal from the war-torn nation.

Lavrov arrived in Islamabad with a bag of promises ranging from possible defense, energy and infrastructure development cooperation. While the offers were warmly received by Pakistan, the two sides are still far from developing any type of strategic partnership.

Pakistan currently depends on IMF loans the distribution of which is under U.S. control. But with Russia and China chipping in Pakistan may not lose too much. The main reason why Pakistan did not agree with Biden’s initiative is that it included India as one of the nations involved in the scheme. That was an amateur mistake from the get go.

As we wrote at that time:

In [his letter] Blinken announced that he would ask the UN to convene the foreign ministers of Russia, China, Pakistan, Iran, India and the United States to discuss a unified approach for supporting peace in Afghanistan. Pakistan, which supports the Taliban, is likely to reject any inclusion of its arch enemy India into such a process. 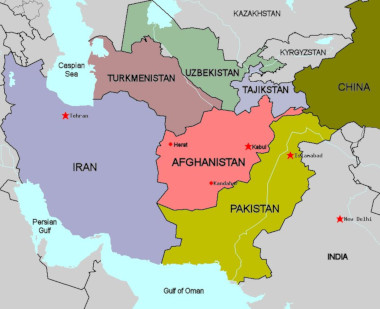 For obvious strategic reasons Pakistan can never allow its enemy India to gain a foothold in Afghanistan.

Nor can China and Russia allow the U.S. to stay in Afghanistan:

Both Russia and China are opposed to an open-ended US military presence in Afghanistan, a country where both have grand infrastructure development designs and security concerns.

Specifically, America’s military presence in Afghanistan is seen as a stumbling block for the completion of China’s Belt and Road Initiative (BRI) and Russia’s Eurasian Economic Union (EEU) trade and integration schemes.

Chinese diplomatic officials have recently claimed in press briefings that the US is using its military and intelligence presence in Afghanistan to stir trouble in China’s far-western Xinjiang region, where as many as one million ethnic minority Uighurs have been interned in so-called “vocational” camps.

As the Annual Thread Assessment released today by the Office of the Director of National Intelligence notes about Afghanistan:

We assess that prospects for a peace deal will remain low during the next year. The Taliban is likely to make gains on the battlefield, and the Afghan Government will struggle to hold the Taliban at bay if the coalition withdraws support.

Leaving Afghanistan and dumping those great plans of using it as a Uighur base against China is the right thing to do.

This lets me hope that Biden will stick to it:

BREAKING: Senior administration official says the withdrawal from Afghanistan by Sept. 11 is NOT conditions based. Biden has judged that “a conditions based approach, which has been the approach of the past two decades, is a recipe for staying in Afghanistan forever.”

Then again – the CIA and the Pentagon have ways and means to change such presidential decisions. We will know on 9/11 if they let Biden get away with this one.

2 thoughts on “Will U.S., NATO Give Up and Leave Afghanistan By September 11?”