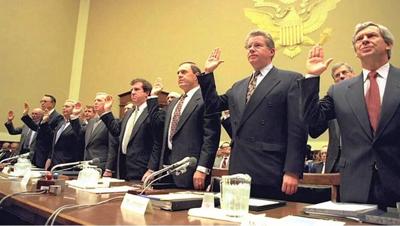 In the 1950’s scientists Richard Doll and Bradford Hill published a study from the UK finding that the risk of lung cancer was related to the number of cigarettes smoked per day, and this risk was 25 times higher in those who smoked more than 25 cigarettes per day.

Other scientists, namely Ernest Wynder and Evarts Graham, found a strong association between bronchogenic carcinoma and smoking. 96.5% of men with bronchogenic carcinoma were heavy chain smokers compared to 73.7% of the general population. Several extensive studies within one year of each other found the same thing, cigarette smoking is strongly related to lung cancer, and the more one smoked, the higher one’s risk.

The big problem was that the cigarette industry was a multibillion-dollar lobby by the mid- 1960s. And they were not about to allow a few renegade scientists to spoil their profits. The Marlboro Man, as Dr. Mukherjee wrote in his Pulitzer Prize-winning book, The Emperor of All Maladies, was the most successful smoking icon by 1955. Dr. Mukherjee describes how the Tobacco Industry fought back by twisting science against the public, first by arguing that an association does not prove cause and effect, and later by offering to perform the studies.

The tobacco scientists argued that lung cancer was caused by genetics: if you were born with cancer genes, you developed cancer, and if you weren’t, you didn’t get it. Cigarettes might be associated with cancer, but they argued that more studies were needed if one were to actually “prove a causal link” between cigarettes and cancer. The actual cause of lung cancer, the tobacco scientists concluded, was faulty genetics and not cigarettes.

To assist with these studies, the generous Big Tobacco even offered to fund the research by founding the Tobacco Industry Research Committee. The TIRC is described further in The Emperor of All Maladies, a book I strongly recommend everyone read. The author writes how this ingenious strategy kept the tobacco companies in business and record-breaking profits for the next 50 years despite causing many millions of lung cancer deaths.

Blurring or confusing the facts as a tactic proved remarkably effective. But by far, the craftiest ruse was for the Tobacco Industry to pretend to embrace the research and set up their own studies. Because by controlling the study design, they could control the outcome.

The same strategy is now used against the public in this pandemic.

Their first victim was Hydroxychloroquine, which proved easy to discredit given that Donald Trump sounded unhinged in his praise for the drug. Later studies seemed to reinforce the belief that HCQ was ineffective; however when academic misconduct was found, it threatened to expose the effort. Big Pharma successfully distanced itself when the fraudulent articles were retracted and blamed on lone scientists acting by themselves.

Dr. Tess Lawrie is a highly-respected and independent research consultant to the World Health Organization and NHS. Her work is routinely relied upon in the formation of International Practice Guidelines. She has found HCQ to have an effect against the coronavirus. Most tellingly, when Dr. Tess Lawrie performed her independent review of the data on Ivermectin, she removed the Fonseca study, which purported to show no benefit against COVID with Ivermectin use.

Dr. Lawrie explained, “They (The Fonseca Group) didn’t find that much of a difference between Ivermectin and the control arm.  But the control arm received HCQ. So basically, there’s a comparison between two fairly active treatments.” Dr. Lawrie explained that there were many reasons to consider HCQ active against the virus.  Thus, two patient groups were compared in Fonseca, both of which received effective drugs against COVID-19, and this was not considered a valid controlled trial of Ivermectin. Therefore the study was eliminated from the meta-analysis.

Doctors across the nation continue to employ both drugs in an antiviral cocktail comprised of HCQ, Ivermectin, Zinc and Vitamin D. In particular, former Harvard professor and NIH researcher Dr. George Fareed of the Imperial Valley has published on this approach and enjoyed remarkable success.

He and his associate, Dr. Brian Tyson, have treated over 5,000 COVID-19 patients with only two deaths. Dr. Fareed pioneered the first HIV clinic in Brawley, California, and notes that the cocktail approach was necessary and became the standard of care in such conditions as HIV and HCV. He feels it is also essential with COVID-19.

Today we know that the earlier Ivermectin is given, the lower the death rate. We learned in the 1950s that the more cigarettes one smoked, and the longer they smoked, the higher the death rate. We now have 50 studies all showing Ivermectin’s benefits across all stages of COVID-19, with The World Health Organization finding an average of 81% decreased mortality.

Merck and the FDA came out against Ivermectin only after the US government contributed $356 million to Merck to develop MK-7110, an anti-COVID drug. This occurred after Merck purchased the rights to MK-7110 for $425 million in a deal announced on December 23, 2020. The chances of this drug receiving approval by the FDA are very high.

The chances of Ivermectin successfully competing against MK-7110, if Ivermectin is also approved, are also high. It is, therefore, logical that a multi-billion dollar industry will use its immense lobbying, media, and advertising power to prevent this. The smoking gun here is that Merck was the original developer of Ivermectin, but now that their old drug is generic and no longer profitable, it is being tossed under the proverbial bus.

Obfuscation and the “offer-to-fund-the-research” through a time-honored and proven strategy of manipulation is once again proving remarkably effective in swaying public opinion.

We have seen this movie before with Big Tobacco.

We already know how it ends. We have 50 studies, all showing Ivermectin’s life-saving benefits. We do not need 50 more to tell that Ivermectin prevents COVID death and should be adopted immediately. The science is clear based upon numerous meta-analyses already performed by world-class and respected scientists Dr. Tess Lawrie, Dr. Andrew Hill, and Dr. Pierre Kory.

This brings me to the Washington Post’s April 8, 2021 article which announced that the government planned to do their own Ivermectin study.  Thanks, but no thanks, to the NIH, in their magnanimous offer to conduct more “research.” We already know what they will find.