[This article is part of CAM’s political assassination series and follows from our updated investigations into the life and death of civil rights icon Malcolm X and Martin Luther King, Jr.—Editors]
END_OF_DOCUMENT_TOKEN_TO_BE_REPLACED 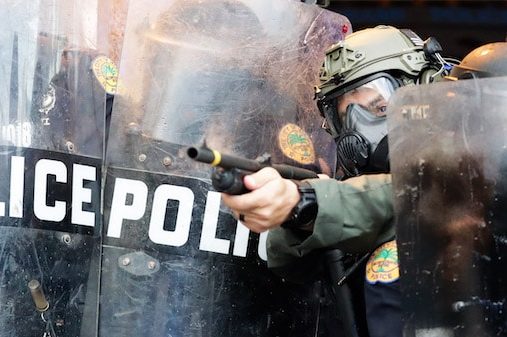 On May 25, 2020, police in Minneapolis Minnesota murdered George Floyd in cold blood. Responding to allegations of counterfeit money, police arrested Floyd, with one officer kneeling on his neck for nearly nine minutes, ultimately suffocating him. The killing was captured on video and quickly spread across the internet.

END_OF_DOCUMENT_TOKEN_TO_BE_REPLACED

This week on CounterSpin: Public protest against racist police brutality has been a beacon for all kinds of activists looking for ways to stand up to oppression—a model for those who want to go down on the right side of history with principled, persistent and peaceful action in resistance to increasingly frightening reactionary exertions of state power. Into this context we now introduce, by way of documents leaked to the magazine Foreign Policy, the FBI’s designation of “black identity extremists” as a movement constituting a violent threat to public safety, and warranting the surveillance and scrutiny of the country’s “counterterrorism” forces. What do we know about the definition of this term and, more importantly, the FBI’s application of it? The ACLU’s Racial Justice Program is on the case; we’ll hear from lead attorney Nusrat Choudhury.

END_OF_DOCUMENT_TOKEN_TO_BE_REPLACED

The FBI has apparently chosen a new heading under which to lump Black Americans targeted for political persecution: “Black Identity Extremists.” There’s a simple explanation for the new categorization. The FBI is a bureaucracy whose day-to-day work involves drawing up lists of people and organizations to be surveilled, disrupted and prosecuted. The dramatic increase in Black “movement” activity since the 2014 police killing of Michael Brown in Ferguson, Missouri, has presented the FBI with a much larger field of targets, including youthful elements loosely grouped under the Black Lives Matter banner. When bureaucracies compile new lists, they typically file them under new names.

END_OF_DOCUMENT_TOKEN_TO_BE_REPLACED

The FBI terrorism unit’s report warning that ‘black identity extremists’ are a violent threat is only the latest in a long tradition of targeting black activists, says the Black Agenda Report’s Glen Ford (inc. transcript)

END_OF_DOCUMENT_TOKEN_TO_BE_REPLACED

We’ve repeatedly noted that the spy agencies aren’t just like giant peeping Tom’s, but they use their capabilities in mischievous offensive actions.

END_OF_DOCUMENT_TOKEN_TO_BE_REPLACED

Assata Shakur could not have been named “most wanted terrorist” without the explicit approval of the first black president and his attorney general. In doing so, they have declared open war on the black liberation movement, something that J. Edgar Hoover and COINTELPRO were only able to do in secret. END_OF_DOCUMENT_TOKEN_TO_BE_REPLACED

Black On The Old Plantation

A Black Agenda Radio Commentary by BAR managing editor Bruce A. Dixon
Metro Atlanta is now the second largest concentration of African-descended people in North America. But with civil rights organizations firmly in corporate pockets, it’s still a spot where the racist corporations like Southern Companies feel free and unashamed to celebrate their history of theft and plunder and future prospects of the same. What does that say about the state of black leadership, about all of us?
Read more
END_OF_DOCUMENT_TOKEN_TO_BE_REPLACED

In a replay of the Federal Bureau of Investigation’s infamous COINTELPRO operations targeting the left during the 1960s and ’70s, America’s political police launched raids on the homes of antiwar and solidarity activists.

END_OF_DOCUMENT_TOKEN_TO_BE_REPLACED

Red Emma’s independent bookstore in Baltimore, Maryland recently had a book release event but without a book signing. Fifty people crowded into Red Emma’s to listen to the author they could not see talk about a secret government program, Operation COINTELPRO.

Marshall Eddie Conway, former Minister of Defense for the Baltimore chapter of the Black Panthers, is one of the longest imprisoned targets of Operation COINTELPRO. Jailed forty years for the 1970 murder of a Baltimore policeman. Conway called Red Emma’s bookstore in Baltimore from his cellblock to talk about his new book, The Greatest Threat.

Conway has been confined four decades since his arrest while at work at the Post Office. Conway was charged with the shooting death of a policeman on the basis of a photo identification by another policeman who allegedly saw Conway in the distance at the crime scene the night before his arrest.

No physical evidence linked Conway to the shooting and his primary accuser ended up being an informer cellmate who bought his own freedom by claiming Conway confessed to the crime. Conway has consistently maintained his innocence and objected to his cellmate fearing subsequent perjured testimony

The Greatest Threat details the heady days of revolutionary spirit and the rise of the Black Panthers that led to the subversion of justice by the Federal Bureau of Investigation. The director of the FBI, J. Edgar Hoover, led a personal secret war against American political activists and targeted the Black Panthers as the most dangerous group in America. Hoover prodded field agents to ‘disrupt’ the Panthers and break the organization by attacking its leadership.

Hoover’s COINTELPRO campaign was national in scope and eventually became a major priority of the police agency–all in secret.

Conway’s controversial trial resembled a farce with Conway denied his own attorney and often not present in the courtroom. The court-appointed attorney, not of Conway’s choosing, only met with Conway for two brief meetings as part of trial preparation. Conway kept a defiant posture when he was in the courtroom and his fate was sealed with a life sentence.

Conway was able to speak with the Red Emma’s audience for the better part of an hour reflecting on his time in prison and answering questions. Several times the call-in lecture was interrupted and Conway had to call back in from the medium-security cellblock where he is imprisoned.

Proceeds from the sale of the book go to Conway’s legal defense fund.

That social networking sites and applications such as Facebook, Twitter and their competitors can facilitate communication and information sharing amongst diverse groups and individuals is by now a cliché.

It should come as no surprise then, that the secret state and the capitalist grifters whom they serve, have zeroed-in on the explosive growth of these technologies. One can be certain however, securocrats aren’t tweeting their restaurant preferences or finalizing plans for after work drinks.

No, researchers on both sides of the Atlantic are busy as proverbial bees building a ‘total information’ surveillance system, one that will, so they hope, provide police and security agencies with what they euphemistically call ‘actionable intelligence.’

END_OF_DOCUMENT_TOKEN_TO_BE_REPLACED

Predictably, ‘terror experts’ are suggesting that ‘Al-Qu-eda’ could be involved in the Madrid bombings, although the Spanish government are still insisting that ETA, the Basque separatist group are more than likely responsible for the carnage. But does it really matter who is responsible? In the age of the security state and engineered hysteria, anything is possible when secrecy rules the actions of government.

END_OF_DOCUMENT_TOKEN_TO_BE_REPLACED

My, what short memories we have. In 1954 the French colonialists got their arses kicked by the Vietnamese at Diem Bien Phu and thus began US imperialism’s mission in stemming the ‘red tide’ in South East Asia. But even before the French defeat, the US had been supplying the French with weapons and logistics support as part of its Cold War strategy directed against the USSR and China. END_OF_DOCUMENT_TOKEN_TO_BE_REPLACED