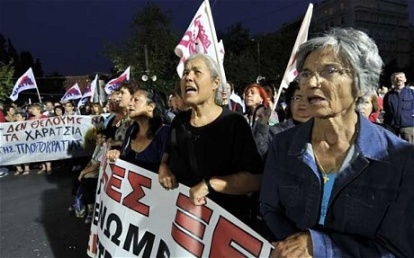 Protesters in front of the finance ministry in Athens. Europe is on the brink of breakdown. A Greek default is almost inevitable. Already standards of living in Greece are plummeting,and protests are mounting in Greece and around the continent.

On Saturday hundreds of activists, trade unionists and left politicians from across the continent are gathering in London for a conference to discuss the crisis and co-ordinate resistance.

Greek strikers, activists from the Spanish ‘Indignant’ movement, leaders of the French New Anticapitalist Party, the German Left Party and the Portuguese Left Bloc will all be there along with members of Attac, the European Left Party, COBAS from Italy and many more.

Uniting the Resistance: building for the 30th November (School Hall two)
Speakers: Alex Kenny (NUT), Paul Mackney (CoR), Paul Brandon (Right to Work)and a speaker from the People’s Charter.
This session will discuss and plan for the biggest possible mobilisation for the protest on 30th November in defence of public sector pensions.