As Adam Johnson (FAIR.org, 4/9/18) writes, media have engaged in extraordinary mental gymnastics to describe the Israeli military’s deliberate killing of Palestinian protesters in the Great Return March, framing long-distance sniper shootings as “clashes” in order to misleadingly “give the reader the impression of two equal warring sides.”

Equally torturous are the linguistic contortions news outlets have performed to avoid stating the simple fact that Israel is shooting hundreds of demonstrators with live ammunition (Electronic Intifada, 4/6/18), killing 30 (Reuters, 4/9/18) and injuring close to 2,000. An Associated Press headline said (4/6/18) said, “Palestinian Protesters Burn Tires, Sending Smoke Billowing at Gaza/Israel Border; Israeli Troops Fire Back Sporadically.” That’s a logical impossibility: Israeli forces cannot “fire back” at people who aren’t firing at them. The sentence rests on the absurd assumption that burning tires is the same as shooting people. 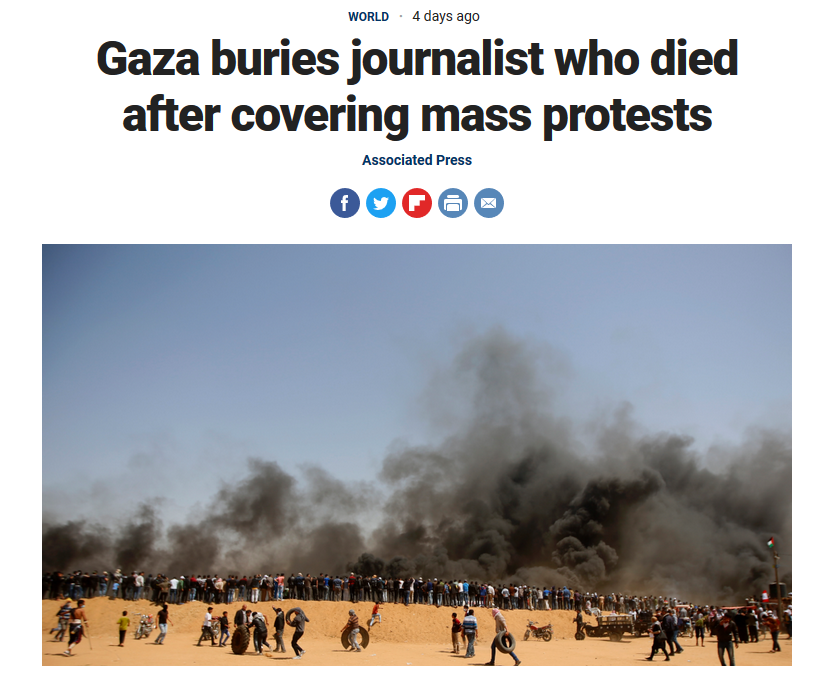 Another AP headline said (4/7/18), “Gaza Buries Journalist Who Died After Covering Mass Protests,” a reference to Palestinian journalist Yasser Murtaja, whom Israel shot while he filmed Friday’s march in Gaza. Readers could conclude from the headline that Murtaja covered the protests and then went home and died of natural causes. In reality, he died because an Israeli sniper shot him. Obfuscating that absolves Israel.

There was also this cryptic news brief from the New York Times (4/6/18):  “Sporadic rifle fire from the Israeli side of the Gaza border made clear that the Palestinian protests could elicit the sort of response that killed 20 people a week ago.” The paper uses 30 words and still fails to convey the critical information that can be communicated in seven words: Israel kills nine Palestinian protesters in Gaza.

Not only does the headline seriously muddy what happened, it also primes readers to blame Palestinians for being massacred, by saying their protests “elicited” the massacre. Likewise, describing Israel’s massacre as a “response” is a way of justifying it.

Sporadic rifle fire from the Israeli side of the Gaza border made clear that the Palestinian protests could elicit the sort of response that killed 20 people a week ago https://t.co/ajma6qnRDV

The references in these headlines to the Gaza/Israel “border,” ubiquitous in the coverage of the Great Return March, are erroneous. There is no border between Gaza and Israel; there is an armistice line. Israel built a fence along that line and uses lethal violence against Palestinians who approach the structure. Calling this barrier a “border” wrongly implies that the question of Palestine has been resolved, which the marches themselves belie.

These headlines, as Johnson says of the term “clashes,” “obscure…power dynamics and the nature of the conflict itself,” occluding the colonial character of the Israeli project and the Palestinians’ right to struggle for liberation.