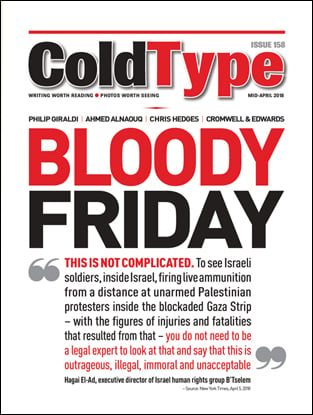 BLOODY FRIDAY: Our main feature in this issue consists of four articles, by Philip Giraldi, Ahmed Alnaouq, Chris Hedges and David Cromwell & David Edwards, on the Gaza Great March of Return protests that have resulted in many deaths at the hands of Israeli snipers. Other big reads in Issue 158 include Ray McGovern’s seriously-disturbing profile of John Bolton, Donald Trump’s new national security adviser, who was earlier described by President George Bush as one of the “crazies” in the White House; Adam Ramsay’s background essay on  the Cambridge Analytica scandal; and CJ Hopkins’ tale of how the mainstream media have invented a Jeremy Corbyn Nazi death cult. In addition, Linda McQuaig looks at the problems of Canada’s new oil pipeline, Nate Robert steps inside a still-contaminated Chernobyl nuclear reactor, Dave Jordanophotographs Detroit at night, and Jason Gilchrist explains why we shouldn’t try to resurrect white rhinos. Plus, as usual, much more great reading   . . .

All 158 issues of ColdType are also available at
www.issuu.com/coldtype