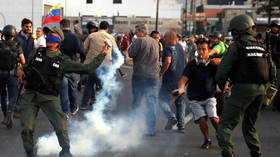 A group of Venezuelan soldiers seized part of a Caracas neighborhood in support of a right-wing coup, the country’s vice president said after the opposition’s self-proclaimed ‘interim president’ declared a military uprising.

Vice President Jorge Rodriguez said on Twitter that “a small group of traitor troops” have positioned themselves in the Altamira neighborhood “to promote a coup” against the government. He said the government was acting to counter them and called on people to stay vigilant in the face of this new development.

Earlier Juan Guaido, the US-backed opposition leader who declared himself the legitimate head of Venezuela, called for a military uprising against President Nicolas Maduro. Speaking in a three-minute video, which showed him against the backdrop of several people in military uniforms, Guaido said the time has come for decisive action.