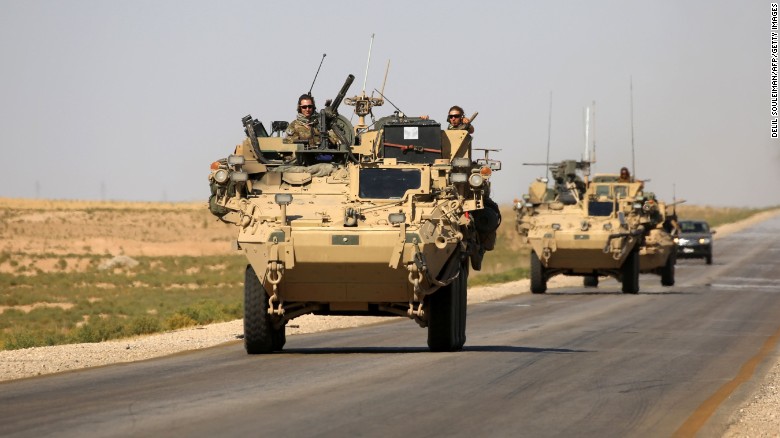 It is now clear that on 14 April 2018, the three Governments of U.S., UK, and France, fired over a hundred missiles against Syria, on no more ‘justification’ than staged videos that had been done by those regimes’ own proxy boots-on-the-ground fighters in Syria, who are trying to overthrow Syria’s existing, non-sectarian Government and replace it by a Sharia-law regime that would be selected by agents of Saudi Arabia’s ruling family.

In other words: the fighters whom the U.S., UK, and France, had been arming and training, had themselves created this pretext of a faked ‘gas attack’ having been perpetrated against civilians, as an excuse in order for those three national regimes (which Governments are those jihadists’ own foreign supporters and backers — the real  international “Deep State” imposing the empire of which they themselves are already a part as the empire’s proxy boots-on-the-ground army) to, additionally and now directly, invade Syria, by means of over a hundred missiles against Syria, on that date: 14 April 2018. The U.S.-and-allied Deep State worked in conjunction with these jihadists in order to wage their war against Syria. This international war-crime, of “aggression” against a sovereign state — or, in common parlance, unprovoked aggression, for conquest — is now clear, and will be fully documented in the following news-report, providing the evidence for prosecution of those three Governments, in an appropriate forum:

On 27 October 2019, Caitlin Johnstone posted to Twitter a 2:18-long audio clip from the BBC World Service in which Jonathan Steele, who specializes in reporting on the Midddle East, reported that now a second whistleblower from within the Organization for the Prevention of Chemical Weapons (OPCW) (the U.N.-authorized agency to investigate possible chemical-weapons attacks) is alleging that the OPCW’s final report, regarding the alleged 7 April 2018 chemical attack against Douma Syria, had lied in some significant ways in order to avoid concluding that the ‘attack’ (which had been the excuse for the 14 April 2018 invasion) had been staged and never actually occurred. Johnstone then posted to the American Herald Tribune and other non-mainstream online news-media, an article “The USA’s History Of Controlling The OPCW To Promote Regime Change”, saying:

When the Courage Foundation and WikiLeaks published the findings of an interdisciplinary panel which received an extensive presentation from a whistleblower from the Organization for the Prohibition of Chemical Weapons (OPCW) investigation of an alleged 2018 chlorine gas attack in Douma, Syria, it was left unclear (perhaps intentionally) whether this was the same whistleblower who leaked a dissenting Engineering Assessment to the Working Group on Syria, Propaganda and Media this past May or a different one. Subsequent comments from British journalist Jonathan Steele assert that there are indeed two separate whistleblowers from within the OPCW’s Douma investigation, both of whom claim that their investigative findings differed widely from the final OPCW Douma report and were suppressed from the public by the organization.

The official final report aligned with the mainstream narrative promulgated by America’s political/media class that the Syrian government killed dozens of civilians in Douma using cylinders of chlorine gas dropped from the air, while the two whistleblowers found that this is unlikely to have been the case. The official report did not explicitly assign blame to Assad, but it said its findings were in alignment with a chlorine gas attack and included a ballistics report which strongly implied an air strike (opposition fighters in Syria have no air force). The whistleblowers dispute both of these conclusions.

On 28 May 2019, I had posted “SUPPRESSED OPCW FINDING: War-Crime Likely Perpetrated by U.S. Against Syria on 14 April 2018”, about what one can reasonably presume had been the first of those two whistleblowers, and linking through directly to the actual suppressed OPCW document. That article also described and documented the fact that the U.S.-and-allied allegations, which said that there had been a 21 August 2013 sarin-gas attack by the Syrian Government against its town of East Ghouta, had likewise been faked, though that attack actually had occurred — but not by Syria’s Government: it had been perpetrated instead by the fighters whom the U.S. and its allies had armed (America’s jihadist proxy boots-on-the-ground there).

As I had already reported on 30 September 2015, under the headline “Obama Lied When He Said This”, Trump’s immediate predecessor Barack Obama had lied repeatedly about the alleged sarin gas attack by Syria’s Government against the town of East Ghouta on 21 August 2013, and Obama stopped his planned bombing of Syria as America’s alleged ‘retaliation’ or ‘punishment’ of Syria’s Government for that, only because he couldn’t obtain even one ally to go along with him in an overt invasion, on that occasion. They knew that he was lying about it, though the U.S. press (except for Seymour Hersh in the London Review of Books — not even a U.S. publication) refused to publish the fact. Americans were kept (and are kept) ignorant of the reality. Obama, within the United States, became widely criticized as weak for failing to invade Syria for having ‘crossed his own red line against chemical attacks’, but Obama knew that the jihadists whom he and his allies had armed had actually done the attack, and the only reason why he failed to invade Syria on that occasion is that none of his allies would join him in it. There was no other reason. It wasn’t because he was ‘weak’.

So, now there’s even more certainty than ever that Trump and his allies had committed an international war-crime on 14 April 2018. The U.S. regime’s pattern of lying is clear and consistent, even across U.S. Presidencies. It’s not the quirk of a dictator, but it certainly could be a quirk of a dictatorship.

Fox News headlined on November 3rd “Poll: Bipartisan majorities want some U.S. troops to stay in Syria”, and reported that, “Sixty-six percent of Republicans think the U.S. should keep troops in Syria” and “Among Democrats, 73 percent want the U.S. to stay in Syria.” This is how bipartisanly deceived, by the lying press, Americans are, into supporting and continuing to support a military invasion, aggression and occupation, against a sovereign nation that never had invaded nor even threatened to invade the United States. (Americans don’t even know what international war-crimes are.) Syria’s Government has been at war against ISIS, which the U.S. regime has been sometimes against and sometimes secretly for and arming; and the U.S. regime’s main boots-on-the-ground fighters to overthrow and replace Syria’s Government have been primarily Al Qaeda but also Kurds. Al Qaeda fights for the Saud family and other Arabic royals, but the Kurds fight for the establishment of a Kurdistan in Turkey, Syria, Iraq, and Iran, which breakup of those countries would weaken each one of them. Perhaps most of what Americans think is true is false, and most of what Americans think is false is true, but certainly Americans are an enormously deceived and misinformed people. This nation’s military-industrial-press complex or Government (i.e., America’s billionaires, who control all of that) have seen to it, and nobody will tell the American public. (This news-report has been offered to virtually all of them for publication.) How can a nation be a democracy if the public never learn the truth about the Government that rules them?

Investigative historian Eric Zuesse is the author, most recently, of  They’re Not Even Close: The Democratic vs. Republican Economic Records, 1910-2010, and of  CHRIST’S VENTRILOQUISTS: The Event that Created Christianity.