By Alan Macleod @AlanRMacLeod
The United States Embassy in Denmark has apologized for a statement it made earlier this week that incorrectly claimed that it was American troops that liberated the Auschwitz-Birkenau concentration camp. In fact, Red Army troops reached its gates on January 27, 1945. “We acknowledge the important contributions of all Allied Forces during WWII and remember the 6 million Jews who perished during the Holocaust,” the correction read.

Yesterday, we inadvertently wrote that US troops liberated Auschwitz-Birkenau. It was of course liberated by Soviet troops. We acknowledge the important contributions of all Allied Forces during WWII and remember the 6 million Jews who perished during the Holocaust.

The incorrect statement was immediately met with scorn online from those who felt this was another example of Soviet erasure and an insult to the enormous sacrifice the U.S.S.R. made to defeat fascism in Europe. Users replied with pictures of Red Army troops liberating the camp. Those same people would likely be unimpressed at the news that Wikipedia has been removing those same pictures, a fact discovered by Lithuanian journalist Vladimir Vodo. While the encyclopedia’s administrators argued that they might not technically be in the public domain, erasing images of the Russian liberation of Auschwitz on Holocaust Memorial Day is not an optically wise move.

The Soviet Union is responsible for killing about four of every five Nazis during the conflict and suffered around 95 percent of all Allied Army casualties. The scale of their loss was enormous; the current Russian government estimates the Soviet losses at 26.6 million dead – around sixty-three times the total American sacrifice in both Europe and the Pacific. Even comparatively tiny states like Latvia and Lithuania lost a similar number of people as the entire United States.

This is far from common knowledge in America; a 2015 poll found that just 11 percent of Americans knew that the Soviet Union contributed the most to the defeat of Nazi Germany, with the large majority who answered picking the U.S. as the most important nation. This finding was replicated all over Western Europe, except in the United Kingdom, where Britons incorrectly believed they primarily defeated the Soviet Union. 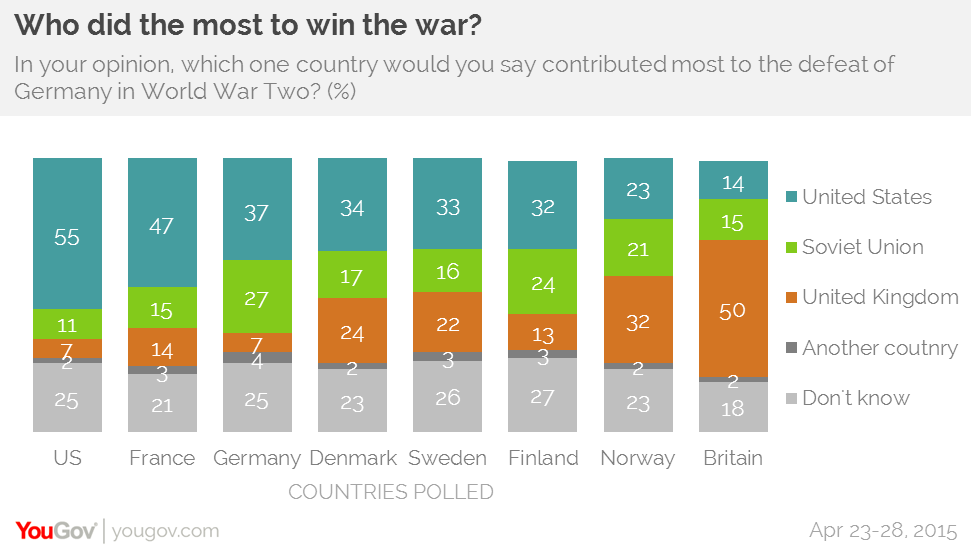 This, argued Vox’s Dylan Matthews, is part of a “successful 70-year campaign to convince people [that] the USA and not the USSR beat Hitler.” He notes, for instance, that in 1945, 57 percent of French citizens recognized the U.S.S.R. to have contributed the most to the effort to beat Nazi Germany. This, despite the fact that the French had virtually no contact with the Soviet Union, and that both the U.K. and the U.S. fought bitter and protracted wars across most of Northern France. By 2004, however, only 20 percent knew the U.S.S.R. was the most important in Germany’s defeat, with 58 percent choosing America. Decades of Cold War hostilities meant that any sympathetic portrayal of Russians for their suffering was politically inexpedient. Therefore, the 26.6 million dead were consigned to the trashcan of history.

Fear and mistrust of Russia continue to this day as its president Vladimir Putin is widely accused of being the mastermind behind Donald Trump’s 2016 election victory. Generalized anti-Russian xenophobia is common in popular culture in a way that would not be tolerated for other groups. Former Director of National Intelligence James Clapper, for instance, claimed that Russians are “genetically driven to co-opt, penetrate” and “gain favor,” while media in 2018 was full of scare stories about Russian anchor babies in the U.S. Despite the fact that Putinism is an expressly anti-communist, neoliberal ideology, commentators feel free to use words like “Russian” and “Soviet” interchangeably, describing senior Putin officials as communists, drawing from a deep well of resentment built up over the past 100 years. The latest Gallup poll found that the majority of Americans see Russia as a “critical threat” and 73 percent see the country unfavorably – a figure three times higher than during the last days of the Cold War.

Located in southern Poland, Auschwitz is the name given to a complex of dozens of concentration and extermination camps where over one million people were exterminated, the majority of them Jews. The incorrect statement was immediately met with scorn online from those who felt this was another example of Soviet erasure and an insult to the enormous sacrifice the U.S.S.R. made to defeat fascism in Europe.Other groups exterminated there, however, included Soviet prisoners of war – a practice only ended by the arrival of the Red Army. All but 92 of the estimated 15,000 Soviets who entered the camp were exterminated. As with their comrades who liberated it, their memory is politically inconvenient for the powerful.