Coronavirus is, undoubtedly, one of the greatest epidemic tragedies of our times. Hundreds of dead people and thousands of ill ones are the proof of it. For any person with good faith and interested in the well-being of people, it is a reason of preoccupation and compassion towards the victims. However, this good intention with people does not seem to be observed in some western countries.

The misinformation transmitted by western media is causing in common people a big confusion, making them think that every Chinese is infected by the mortal virus, which is creating a great wave of hate against everyone and everything that belongs to China. Clearly, this epidemic is being used by western potencies as a mean of hybrid war.

As while the virus causes more victims, sinophobic sentiments grow up all around the world. In Asian countries, an anti-Chinese racism is becoming stronger day after day, as we can see in Japan, where the Twitter hashtag “#ChineseDontComeToJapan” is one of the top Internet trends. Also, in Vietnam, Hong Kong – which, remembering, is a part of China – and South Korea, private corporations are sharing anti-China propaganda, saying that Chinese clients are not welcome there.

In Europe – a continent that claims Humans Rights, political correctness and democracy as supreme values – hate against China can also be witnessed, as we see, for example, in France, where journals are spreading lies about China and coronavirus, helping to create the myth of a “yellow threat”. Also, in Britain, The Herald Sun published an issue with the infamous headline “Chinese Virus Pand-monium”, and, in Germany, Der Spiegel published an issue with “Coronavirus. Made in China” as title.

In the American continent, the same anti-China racist sentiments are being fomented by media. In a Canadian school in Toronto, children who visited China were impeded to go to the school by the students’ furious families. In Brazil, a young student who is descendent of a Japanese family was insulted by an elder woman who confused her with a Chinese. During the racist criminal attack, the girl was publicly compared with pork in Rio de Janeiro’s metro. 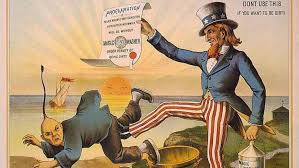 Clearly, there is another epidemic problem in Chinese horizon that is the use of fake news and misinformation as instruments to foment hate against China, growing a scenario of racist aggressions towards Chinese people, culture, customs, traditions and politics. It is also a case of hybrid war, or, in other terms, a living proof that non-military means can also be used in warfare.

As an example of misinformation being shared irrationally in social networks to attack China, we have messages with pictures and videos that were supposedly took in China, showing some scenarios that seem shocking to non-Chinese people, as the eating of dog, cat, snake and bat meat. There is a myth circulating in the West that the consumption of these animals is absolutely common in China, being their meat easily found as food anywhere, which is, of course, a big and malicious lie.

These exotic animals are also rarely consumed in China. Dog and cat meat eating is a practice in extinction, being currently restricted to a few rural districts. Also, these other animals’ meat sound also exotic to any common Chinese person. The major part of the pictures and videos shared in Internet were not took in China, but in other Asian countries, where it is possible to find bat, snake and dog or cat meat more easily.

It is necessary to pay attention on the fact that spreading these lies is no an accident, but a well-organized project. There are several interests in creating a global atmosphere of hate against China, as well as against every country that fights for a multipolar world. Xenophobe is, at least in this case, not a personal repulsive sentiment, but a weapon – a very dangerous one.

Above all, we can see how the western potencies act maliciously in sense to cause damage to every country that represents a “threat” to US hegemonic plans.

China, becoming the greatest world potency, is a reason of fear to the western axis. Cowardly, the enemies of China react spreading lies and fomenting hate. In contrary, China must act against these attacks with the same energy that is being used against coronavirus just because both are real threats and questions of national security.

This article was originally published on InfoBrics.