The rise of the far right in Ukraine is one of the most disturbing trends in 21st century Europe. But it’s a story you rarely get to read about in the British press.

These days, the mainstream media does not have much to say about Ukraine. And when Ukraine is mentioned, the main focus tends to be on Ukraine as it relates to the latest American political scandal, rather than on Ukraine itself. Six years ago, the revolt in Kyiv put Ukraine at the top of the news agenda, but now the papers have gone quiet.

This lack of interest in Ukraine is surprising, because Ukraine has some big stories that you would expert journalists to be reporting. The country has been going through a violent upheaval, and the fighting in Ukraine’s eastern region still continues.

Supposedly, the reason for all the bloodshed was to secure Ukraine’s European future? So how’s that project going today? Not well. Ukraine is still a long way from full membership of the European Union, and remains one of Europe’s poorest countries.

Clearly, Ukraine is not working out. Of course, the nationalist uprising in Kyiv did achieve one of its core objectives: the termination of the old partnership with Moscow. But the uprising also aimed to end corruption in Ukraine and curb the power of the oligarchs. On both counts, Ukraine’s political elite has performed badly. Ukraine’s corruption rating is still poor, while Volodymyr Zelensky, Ukraine’s current president, was helped into power by the influential billionaire, Ihor Kolomoisky.

All in all, Ukraine’s “bright future” seems further away than ever, and the biggest losers from Ukraine’s pro-Western course have been the Ukrainian people. But the Western press long ago settled on the story that Vladimir Putin is the big bully, and Ukraine has been cast in the role of his victim.

Because Vladimir Putin is labelled as the bad guy, and criticism of the Ukrainian government is thought to serve his agenda, Ukraine has become a no-go area. The powers that be don’t want to admit how bad things are inside Ukraine, so The Guardian’s “fearless investigative journalists” don’t get to write about it. 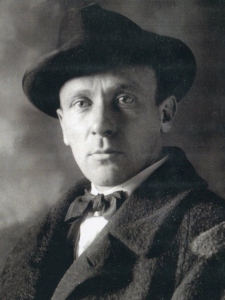 Mikhail Bulgakov. During his lifetime, his work was censored by the Soviets. In 2014, the new Ukrainian government banned a TV dramatization of his novel, The White Guard. (Photo: Wikipedia)

Instead, the truth is being swept under the carpet. And the truth is that the nationalist forces that took control of Ukraine are bringing shame on their country. Ukraine has given way to crude nationalistic resentment, to the extent of vandalizing Soviet war memorials and banning books, TV dramas and films. And in its search for new national heroes to replace the Soviet heroes it is rejecting, Ukraine is glorifying the most despicable characters from its fascist past. 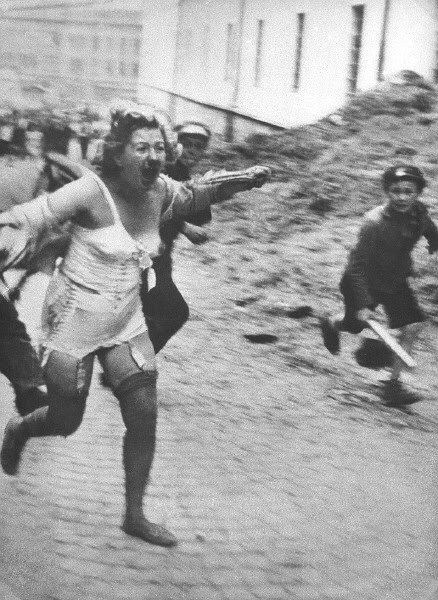 The historical background is complicated. In the 1930s, Ukraine was oppressed by the Bolsheviks and millions died of famine. Then, during World War II, the German invasion of the USSR gave Ukrainian nationalists the opportunity to push for independence, in an uneasy alliance with Nazi Germany. By collaborating with Nazi Germany, the Ukrainian nationalists hoped that they would be rewarded with their own Ukrainian state.

As Ukraine fashions a new identity for itself, Ukrainians have been seeking inspiration from Stepan Bandera, Roman Shukhevych and the other Nazi collaborators who piggy-backed on German military victories to advance the Ukrainian nationalist cause. 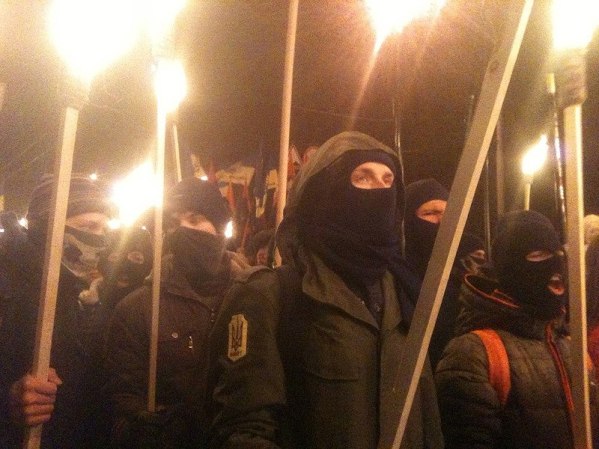 The trouble is that these Ukrainian nationalists, who proclaimed statehood in Lviv in 1941, were committed to more than just a tactical alliance with Nazi Germany. Their organization sympathized with Nazi ideas, too.

The Nazis regarded Jews, Poles and Russians as subhuman, and so did Stepan Bandera. The Ukrainian nationalists massacred Poles, perpetrated pogroms and were willing participants in the Holocaust. They even had their own division in the SS, the SS Galicia.

A photo of Stepan Bandera displayed during the Maidan uprising, January 2014 (Photo: Wikipedia)

The dark side of Ukraine’s wartime history has become a point of reference for the new, post-Maidan regime. As monuments to Soviet commanders are demolished, new monuments to Ukrainian fascists are going up.

The Ukrainian government has designated 1st January, Stepan Bandera’s birthday, as a national holiday. Statues of Bandera and Shukhevych have appeared in many cities, and streets are being named after war criminals. Ultranationalist organizations are invited to schools to give children a “patriotic” education. Nazi symbols are openly displayed at concerts and football matches, and antisemitic literature is sold on market stalls.

Meanwhile, monuments commemorating the Holocaust have been desecrated, and synagogues have been attacked.

“Death to the Yids”: graffiti beside a synagogue in Odessa. The sign is a Wolfsangel, a common Nazi symbol. (Photo: Wikipedia)

Old poisons are rising to the surface. The figures openly praised by Ukrainian leaders are the scoundrels and fanatics who threw in their lot with Hitler. The new Ukraine is obsessed with its own national grievances, but it shows little respect for any of the non-Ukrainian victims of history. With its sickly blend of romanticism and self-pity, Ukraine is now a breeding ground for racism and extremism. But this is something the Western press is not yet ready to admit.

Instead, the press has been colluding in a conspiracy of silence and shutting its eyes to the danger. By putting up statues of fascists from the past, Ukraine is giving a green light to fascism today.