When a cluster of pneumonia cases of unknown origin appeared in Wuhan the first reaction was of course confusion and not an immediate large scale response. Yes, China could have been a bit faster and some local administrators made mistakes, but who please, if not the Chinese government, has since led the global fight against the novel coronavirus? 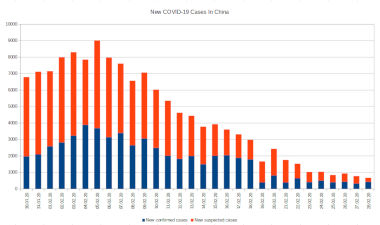 The report of the WHO mission to China is lauding it for good reasons:

China’s bold approach to contain the rapid spread of this new respiratory pathogen has changed the course of a rapidly escalating and deadly epidemic. A particularly compelling statistic is that on the first day of the advance team’s work there were 2478 newly confirmed cases of COVID-19 reported in China. Two weeks later, on the final day of this Mission, China reported 409 newly confirmed cases.

This decline in COVID-19 cases across China is real.

It is the U.S. which is lagging in the fight as it still can not even test people who need to be tested:

The federal agency shunned the World Health Organization test guidelines used by other countries and set out to create a more complicated test of its own that could identify a range of similar viruses. But when it was sent to labs across the country in the first week of February, it didn’t work as expected. The CDC test correctly identified COVID-19, the disease caused by the virus. But in all but a handful of state labs, it falsely flagged the presence of the other viruses in harmless samples.

The CDC is still acting irresponsibly:

Across the U.S., fewer than 2,000 people had been been checked for the virus by Thursday — a bare fraction of those in other large countries. City and state officials are frustrated by the federal Centers for Disease Control and Prevention’s slowness to distribute accurate tests that could identify spreaders of the coronavirus.

That the CDC botched its response is probably not astonishing when its highest boss calls the obvious danger a ‘hoax’:

President Donald Trump on Friday night tried to cast the global outbreak of the coronavirus as a liberal conspiracy intended to undermine his first term, lumping it alongside impeachment and the Mueller investigation.

He blamed the press for acting hysterically about the virus, which has now spread to China, Japan, South Korea, Iran, Italy and the U.S, and he downplayed its dangers, saying against expert opinion it was on par with the flu.

“The Democrats are politicizing the coronavirus. They’re politicizing it,” he said. “They don’t have any clue. They can’t even count their votes in Iowa. No, they can’t. They can’t count their votes. One of my people came up to me and said, ‘Mr. President, they tried to beat you on Russia, Russia, Russia.’ That did not work out too well. They could not do it. They tried the impeachment hoax.”

Then Trump called the coronavirus “their new hoax.”

The U.S. is botching its response to the outbreak just like Japan has botched it. South Korea shows how it should be done. 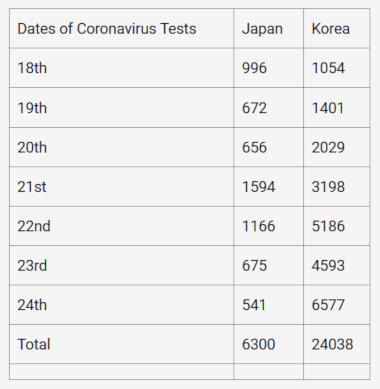 South Korea has gone through over 10,000 COVID-19 tests today. People who have any slightest of symptoms (or not) can even get themselves tested at these testing drive-thru stations. The whole process takes 10 mins. 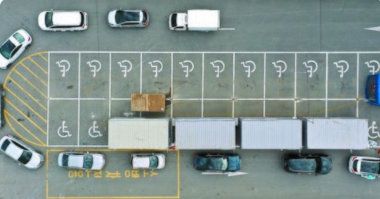 I’m in awe.
As @jeeabbeylee points out, these COVID-19 tests are FREE. Anyone can get tested.
And with emergency localised messages being beamed to (almost) every phone in the country (you cannot switch these alerts off), people know exactly whether they’ve been in the path of the virus or not. It’s really incredible.
Might I also point out that not only is COVID-19 testing in S. Korea free, it’s open to all, including foreign residents, INCL. undocumented immigrants.
Medical centres are exempt from obligation to notify immigration office of visa status of patients.
Oh also, while COVID-19 tests in S. Korea are free, if the medical team determines the test to not be necessary but someone insists on wanting to be tested, they’ll have to fork out 160,000 won ($132).

The way the U.S. health system is structured will make it difficult to avoid an wider epidemic. It will hit workers especially hard:

The CDC released very clear instructions to help prevent the spread of respiratory diseases, including staying home when you are sick. Not everyone has that option.

We know in that the United States, millions of people delay getting medical treatment because of the costs. The latest Census numbers tell us that over 27 million people in this country are uninsured, up nearly two million over the previous year. These trends are moving in the wrong direction, notably because of losses in Medicaid coverage.
…
The CDC recommendations all seem well and good but how does someone with no paid sick days or insurance cope?

There are also the undocumented immigrants who will fear that health personal may inform the immigration authorities.

National Nurses United warns that U.S. hospitals and hospital staff are unprepared for handling an epidemic:

The single COVID-19 patient admitted to the [UC Davis Medical Center] on Feb. 19 has now led to the self-quarantine at home of at least 36 RNs and 88 other health care workers.

These 124 nurses and health care workers, who are needed now more than ever, have instead been sidelined. Lack of preparedness will create an unsustainable national health care staffing crisis.
…
National Nurses United is conducting a survey of registered nurses across the country on hospital preparedness and will be releasing those results next week.

Preliminary results from more than 1,000 nurses in California are worrisome:

Most of the issues above can be fixed if the government and Congress start to take the Covid-19 seriously. I have yet to see any sign that this is the case.

Tests must be freely available for anyone with even slight symptoms. Those who test positive must be isolated. There must be teams to trace and alarm all their contacts. All costs for COVID-19 cases, including money to pay people during for quarantine, must be paid by the government.  Services must be set up for deliveries to people who quarantine themselves at home. Each new cluster must receive an immediate response on a large scale. Health staff needs to get extra pay.

The above will require new legislation. It should be discussed today, not tomorrow.

China has shown how a response can be done effectively. South Korea is following that path and will likely be equally successful.

There are also the economic consequences which only slowly start to come into view. Economist Nouriel Roubini predicts that the pandemic will cause a very strong global recession:

I expect global equities to tank by 30 to 40 percent this year.

The recession will also require massive government stimulus and work programs as most central banks already have extremely low interest rates and no room left to act.

To panic over the above facts is not useful at all. But people should press their governments and legislators to at least start the fight against the epidemic and its predictable consequences.