Yesterday 24 November 2021, at least 27 men, women and children died attempting to reach safety in the UK. Our hearts go out to the families and loved ones of all those who have lost their lives.

The tragic truth is that these deaths could, and should, have been prevented.

Priti Patel failed to prevent them. She must resign.

Join our calls for her to resign.

END_OF_DOCUMENT_TOKEN_TO_BE_REPLACED

As our team digest the Nationality and Borders Bill and its dire implications for human rights we join many others in expressing our extreme dismay at the proposition of such a cruel and unworkable immigration bill.

END_OF_DOCUMENT_TOKEN_TO_BE_REPLACED

Earlier this year we reached out to you, to support our legal challenge against the Home Office.

We had significant concerns about the Home Office’s failure to provide EU citizens living in the UK with an accessible and humane process for settling here after Brexit.

END_OF_DOCUMENT_TOKEN_TO_BE_REPLACED

EU citizens with complex mental health needs risk being removed and indefinitely detained from 30th June. Migrants Organise is taking the Home Office to court to prevent this injustice.

In this blog, our Legal Organiser, Brian Dikoff, argues that unless action is taken now, tens of thousands more vulnerable people are at risk of being left without any immigration status and plunged into the Hostile Environment.

END_OF_DOCUMENT_TOKEN_TO_BE_REPLACED

A proposed new EU law governing standards and procedures for deportations would breach fundamental rights standards, massively expand the use of detention, limit appeal rights and undermine ‘voluntary’ return initiatives. It should be rejected by the European Parliament and the Council, argues a new analysis published today by Statewatch. [1]

END_OF_DOCUMENT_TOKEN_TO_BE_REPLACED

Frances Webber explains why Corporate Watch’s ‘The UK border regime: a critical guide’ will be an essential resource for activists.

END_OF_DOCUMENT_TOKEN_TO_BE_REPLACED

[Although the US is the subject of this piece, firstly, it applies equally to this septic isle as it does to the US and secondly, you have to hunt hard to find journalism of this quality here in the UK, to our lasting shame. WB] 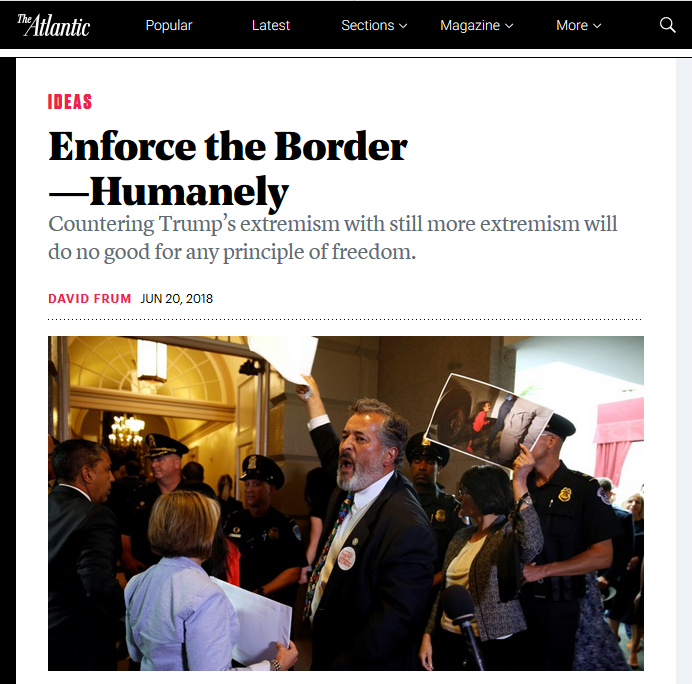 David Frum (Atlantic, 6/20/18) rejects the “extremism” of holding the US responsible for creating the conditions that force mass migration.

END_OF_DOCUMENT_TOKEN_TO_BE_REPLACED

The lethal consequences of ‘hostile environment’ policies continue to be revealed in our regular calendar of racism and resistance. On 20 June, as Harmit Athwal reports, 23-year-old Mustafa Dawood was found dead after falling from a building in Newport, Wales, as immigration officers carried out a raid at a car wash.

END_OF_DOCUMENT_TOKEN_TO_BE_REPLACED

Across the world, companies like Microsoft and Salesforce are helping ICE and Frontex lead their war against immigrants and refugees.

Call on tech companies to side with immigrants and renounce their contracts with ICE and Frontex! END_OF_DOCUMENT_TOKEN_TO_BE_REPLACED

Every day, according to some estimates, human adults kill 50,000 of our children. The true figure is probably significantly higher. We kill children in wars. See, for example, ‘Scourging Yemen’. We kill them with drones. We kill them in our homes and on the street. We shoot them at school. END_OF_DOCUMENT_TOKEN_TO_BE_REPLACED

Every day, according to some estimates, human adults kill 50,000 of our children. The true figure is probably significantly higher. We kill children in wars. See, for example, ‘Scourging Yemen’. We kill them with drones. We kill them in our homes and on the street. We shoot them at school. END_OF_DOCUMENT_TOKEN_TO_BE_REPLACED

Recent attention to the Windrush scandal has focused attention on the many ways migrants are deterred from accessing healthcare. The government has this week announced it will be suspending “with immediate effect” the controversial memorandum of understanding (MOU) under which NHS Digital shared NHS patients’ details with the Home Office.

END_OF_DOCUMENT_TOKEN_TO_BE_REPLACED

It was not just Britain First and the English Defence League that tried to make political capital out of the attack in Westminster by Khalid Masood that led to the deaths of a police officer on duty, a US tourist, a South London pensioner and a teacher picking up her children from school. We’ve collected together some of the statements of UK politicians and international figures who were not slow to add their very unhelpful pennyworths to the supposed analysis of the atrocity. Predictably, the extreme Right linked the attacks to immigration, reigniting toxic debates about immigration and social change that had already been unleashed by Brexit. As a Kurdish teenage asylum seeker from Iran fights for his life, after a brutal racist attack in Croydon, we join those who call for an end to the scapegoating of migrants and refugees.

This week, IRR News delves deeper into the immigration debate. Liz Fekete in ‘Stop feeding the beast!’ examines themes thrown up by the National Theatre’s My country: a work in progress based on seventy interviews with ‘leavers’ and ‘remainers’, and concludes that immigration (with the aid of the tabloids) now stands in for a set of general disillusions at the end of an era of full employment. Jenny Bourne takes issue with David Goodhart’s The Road to Somewhere: the populist revolt and the future of politics which demands a place in the sun, in the name of ‘decent populism’ for majority grievances against immigration. Grievance as a form of identity, she argues, is a very superficial way of interpreting the seismic changes being brought about by neoliberalism, the changes now presenting such a challenge to the Labour Party and trade union movement.

Returning to the Westminster attacks, Sue Conlan, takes issue with demonisation by the mass media of a whole city – Birmingham – as a convenient scapegoat for the production of supposed extremists. Finally, our regular calendar of racism and resistance, a fortnightly resource for anti-racist and social justice campaigns, is available here.

As the Calais “jungle” migrant camp closes today, high profile controversy over the UK’s external borders are only one side of the story.

Three years have passed since Theresa May, then home secretary, committed to creating a “hostile environment” for so-called “illegal” migrants in the UK. Since then the UK has reinforced and multiplied its inland borders, making border guards of teachers, landlords, and healthcare workers.

END_OF_DOCUMENT_TOKEN_TO_BE_REPLACED

A recent tweet by Lambeth MPS brags about the eviction of a squatted doctors surgery in Brixton on a rainy January morning: ‘another crime generator closed down!’ they exclaimed. Happily, the twitter account was met with a barrage of abuse, but this tweet shows how the police are often found intervening in what is a civil matter to make people homeless. UKBA officers had got an invitation to this eviction as well, meaning that people were not just made homeless but detained and imprisoned because of their immigration status. In the run up to the eviction Lambeth police had been harassing the squatters through paying regular visits to the squat and trying to look through the windows.