Some writers want America to occupy Syria to weaken Russia. In the Washington Post (3/30/18), Josh Rogin claimed that “there are a lot of good arguments for maintaining an American presence in Syria after the fall of the Islamic State,” but stressed that the “larger US mission in Syria” was necessary for “stopping Russia from exerting influence over the region.”

Michael Gerson, writing in the same paper (4/2/18), was concerned that a US departure “would leave Russia as the undisputed power broker at the heart of the Middle East,” a dubious claim in a region that includes Saudi Arabia (whose military budget by some counts exceeds Russia’s) as well as nuclear-armed Israel, both close US allies.

CNN ran two articles that made the same point about Russia, with Dan Merica and Jim Acosta (3/30/18) writing “Trump Promise to Get Out of Syria ‘Very Soon’ Could Be a Win for Russia,” and Zachary Cohen and Ryan Browne (3/31/18) telling readers “that most foreign policy experts agree that” the void left by US forces in the event of a withdrawal “would likely be filled by Russia.” The Syrian government’s alliance with Russia supposedly justifies Washington’s occupying Syria, in defiance of international law. Partnership with Russia is unacceptable; only submission to the US is permissible.

Moreover, Gerson fretted, a US pull out “would cede [Syrian] oil fields under the control of US-allied forces,” an intolerable outcome if one accepts that the US is the rightful owner of other countries’ resources. 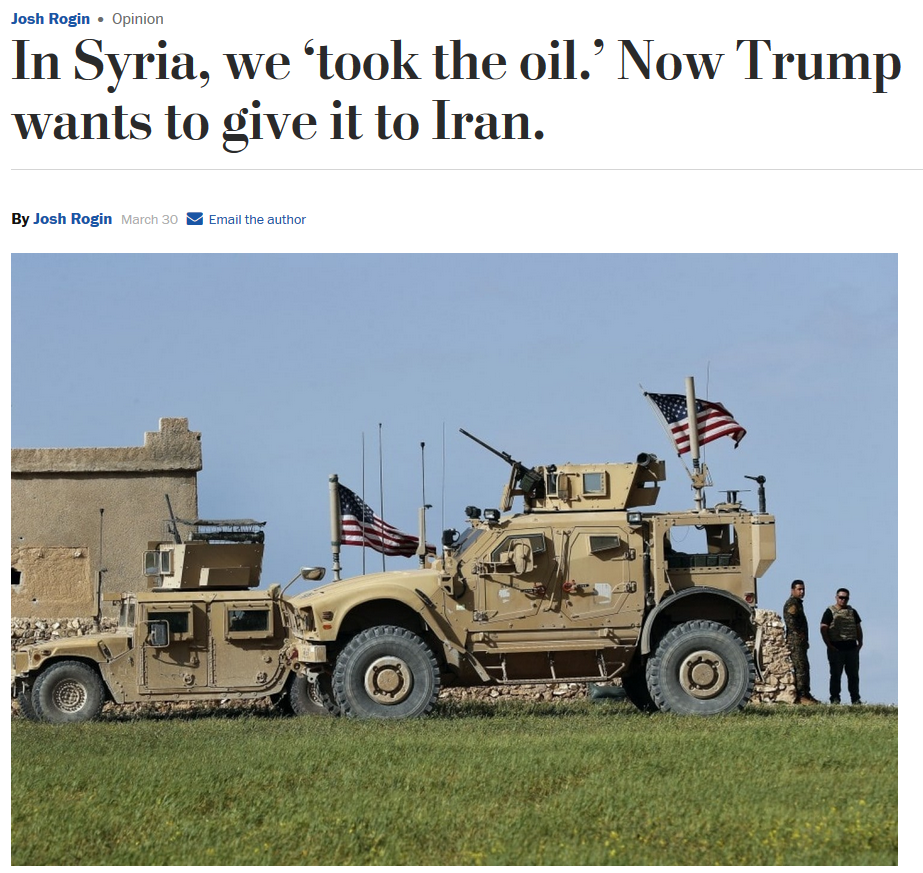 “The United States and its partners control almost all of the oil” in Syria, writes the Washington Post (3/30/18). “And if the United States leaves, that oil will likely fall into the hands of Iran.”

Rogin worried that “if the United States leaves, [Syria’s] oil will likely fall into the hands of Iran.” What he described is the possibility that the Syrian and Iranian alliance could lead to an arrangement wherein Iranians have access to some amount of Syria’s oil, the type of agreement between states that exists the world over. The prospect of two states in the Global South working together in this fashion alarms Rogin, who therefore calls for America to maintain control over Syrian oil. He said Trump should

remember that he has constantly complained that in Iraq, “We should have kept the oil.” Of course, we can’t and shouldn’t take or keep Syria’s oil. But there’s a grain of truth in Trump’s idea. Control over oil is the only influence we have in Syria today.

Apparently Iran has no right to make use of Syria’s oil, even if the Syrian government agrees to that, but the US has a right to “control” Syria’s oil irrespective of the wishes of Syrians.

Several reporters argued that the US should continue an illegal military occupation of Syria as a cudgel against Iran. Rogin said that American forces should stay in Syria to guard against “Iranian expansionism,” without explaining what he means by “expansionism” or offering any evidence that it’s taking place. Gerson, similarly, contended that taking US troops out of Syria “would reward Iran’s search for regional hegemony,” and would amount to “surrender[ing] Syria to Iran.”

In May, Trump is expected to pull the United States out of the Iran deal, meaning that he will reimpose US sanctions on Iranian oil. It would be profoundly counterproductive to hand Iran control over a swath of Syria that contains huge amounts of oil at the exact same time.

If the US were to leave its base located at the At Tanf garrison in southeastern Syria, Iran would be able to secure its overland route from Damascus to Tehran, further securing its regional influence.

Such approaches devalue the lives of Syrians, who are cast not as humans with intrinsic value and rights to self-determination and self-governance, but as pieces on a geopolitical chessboard that America can use as it sees fit to try to outmaneuver Russia and Iran. 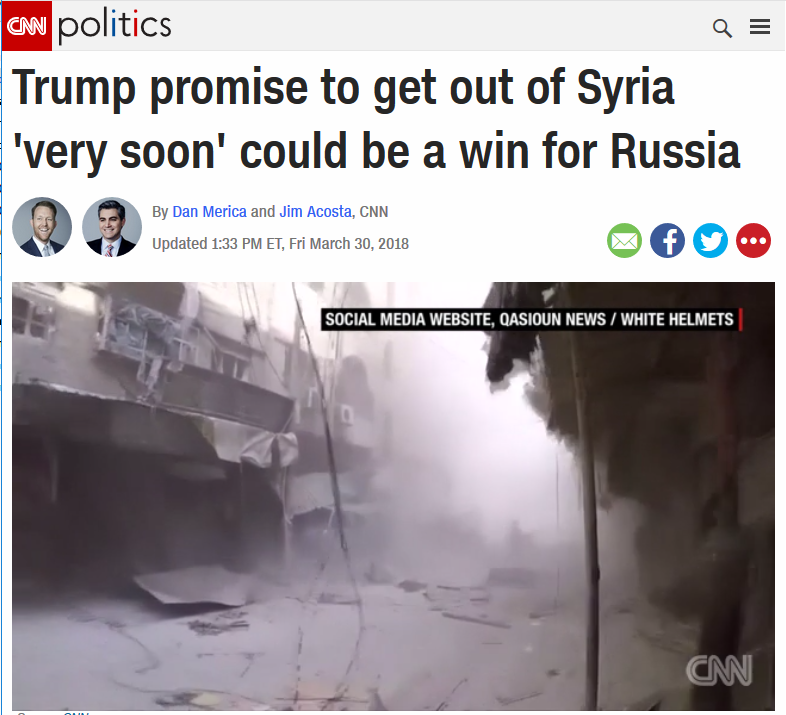 CNN (3/30/18) warned US withdrawal from Syria could help the Russians by “mak[ing] their job of combating forces hostile to Syrian President Bashar al-Assad considerably easier.”

Another common theme in reporting was the idea that US forces need to stay in Syria to keep the war in that country from getting worse. Rogin claimed that the US military presence in Syria is about “preventing a new refugee crisis.” Gerson declared that “the immediate result of an American withdrawal would be a major escalation of the conflict in eastern Syria.” Cohen and Browne said that the possibility of American forces leaving Syria is raising concerns among some national security officials who warn that withdrawing now would not only undermine American credibility in the region but prompt a significant escalation to an already devastating conflict.

But the US military exists to fight wars. It is the most heavily armed, most violent organization in the world. Saying that it should continue to occupy Syria is a way of saying that the war in that country should continue. In fact, it’s a call for escalation of that war, because eventually the Syrian government will want to reclaim the portion of its country America controls, and that will mean a military confrontation with the US. The US has already killed fighters allied with the Syrian government who the US claimed were trying to take back land from the US-backed Syrian Democratic Forces (Reuters, 2/7/18).

Underlying all of these positions is the assumption that the United States has the right to determine Syria’s future. Merica and Acosta explicitly worried that removing US troops from Syria would interfere with regime change efforts: “A US withdrawal would make [Russia’s] job of combating forces hostile to Syrian President Bashar al-Assad considerably easier.” Cohen and Browne were troubled that “the Syrian regime could also benefit from the economic advantages of seizing oilfields currently controlled by US-backed allies.”

According to this perspective, US allies are entitled to Syrian oil, while it’s a frightening possibility that the Syrian government might use Syrian resources to strengthen the Syrian economy, which has been ravaged by war and Western sanctions, with profound effects on the Syrian population.

Rogin says that “fighting extremism” is one purpose of America’s presence in Syria, and Cohen and Browne warn that “a US withdrawal could help ISIS”—despite the fact that the US invasion and occupation of Iraq and US policies throughout the Syrian war were central to the birth and proliferation of ISIS and comparable organizations (Extra!, 11/14; Jacobin, 3/29/16; Newsweek, 12/14/17).

That Syrians might not want to be occupied by the US is never considered in any of these articles, such is the extent of the authors’ imperial hubris.