Around 400 peaceful climate change protesters have been arrested in the UK over the past three days.

According to the Metropolitan Police Service, 290 protesters at Oxford Circus, Marble Arch, Piccadilly Circus and Parliament Square were taken into custody in London on Monday and Tuesday. Protests in the Scottish capital Edinburgh led to 29 arrests. 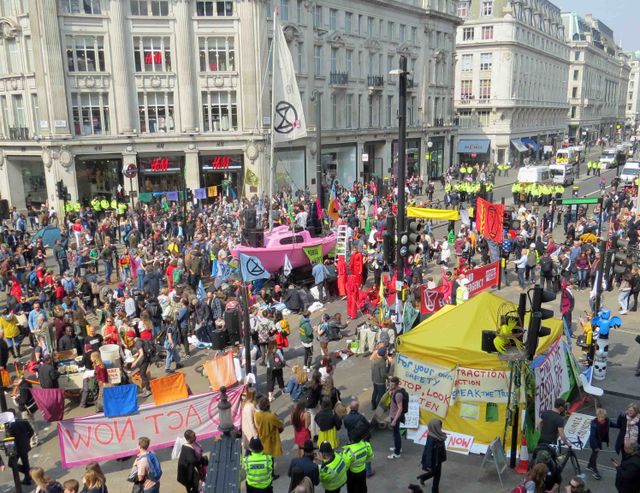 Oxford Circus brought to a standstill

Activists have said they are willing to be arrested and go to prison, acting in the non-violent pacifist tradition of the Suffragettes, Gandhi’s independence movement, the Campaign for Nuclear Disarmament in the 1960s and Martin Luther King in the civil rights movement.

On Wednesday, police switched off some of London’s publicly available webcams and the London Underground’s wi-fi system and flooded stations with officers in response to announcements that “Participants will peacefully break the law in order to stop the Tube and then will wait to be arrested.”

Superintendent Matt Allingham from British Transport Police said, “We have robust plans in place to help us respond to any potential protest activity targeting London’s rail network, including the London Underground.”

In the event, just a couple of protesters glued themselves to the top of a train in the Canary Wharf financial district. But the protests led to road closures and the shutdown of 55 bus routes, affecting half a million people.

A group of protesters chained themselves to the fence outside of Labour leader Jeremy Corbyn’s house.

On Wednesday, the Metropolitan Police said a “designated senior police officer” had declared that all protests had to be confined to the traffic island at Marble Arch in west London and all other protests ended, under Section 14 of the 1986 Public Order Act.

The Public Order Act was introduced by the Margaret Thatcher-led Conservative government in response to the year-long miners’ strike (1984-1985). As well as creating many anti-democratic public order offences, it allows the police to restrict or prohibit protests and marches if they think “serious public disorder” will result. 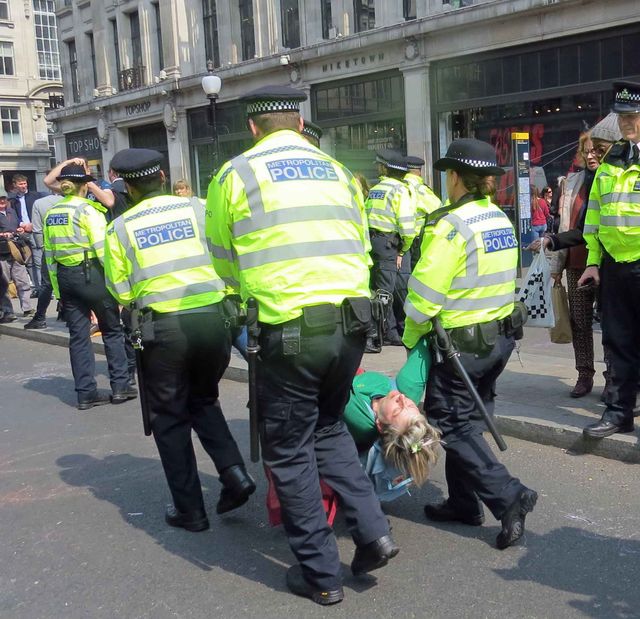 This week, there have been no serious incidents of public disorder except when the police arrived in large numbers and swooped in to arrest people. Despite surrounding their targets, sticking video cameras in their face and dragging them to police vans, there has been no violence from the demonstrators.

No one was spared from the arrogant demands of the police. At Oxford Circus, police officers threatened anyone whom they suspected of “participating” in “unauthorised” protests with arrest. 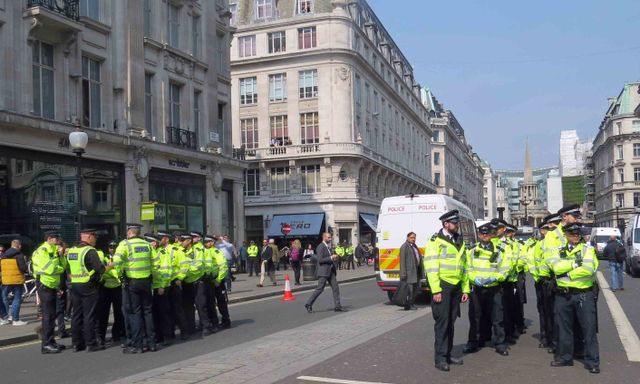 One shop worker who had stepped out to see the demonstration during his lunch break was warned, “If you stay in this area you risk being arrested.” When he asked why he couldn’t listen to what the speakers were saying, he was asked, “Are you refusing to leave and go to Marble Arch?” The officer then said, “I believe you are participating and I am asking you to leave.”

Other local workers, journalists and tourists were treated in a similar manner.

Scores more were arrested yesterday, creating a situation where the police were running out of vans and holding cells in London. More and more demonstrators turned up to take the place of those who had been arrested. 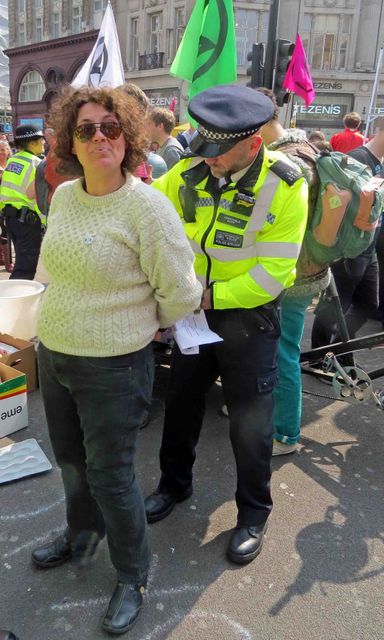 The UK protests were part of global protests held by the Extinction Rebellion (XR) group in more than 80 cities across 33 countries this week, according to the organisers. XR was launched in October last year by a small group of environmentalists called Rising Up. The launch was supported by an open letter from 100 academics, NGO leaders, authors and politicians from the UK, US, Australia, France, New Zealand, Ghana and Bénin, including Naomi Klein, Noam Chomsky, Rowan Williams, a former archbishop of Canterbury, former Ecology Party leader Sir Jonathan Porrit, Labour Party MP David Drew and Green Party MP and former Green leader Caroline Lucas.

Since then, XR has carried out various civil disobedience campaigns, occupations and media events, including pickets of this year’s London Fashion Week and naked demonstrators gluing themselves to the perspex barrier in the House of Commons public gallery during a Brexit debate.

The same pressure politics strategy is evident in this week’s XR leaflets, which are devoted to three demands, pleading with the “Government” to:

* 1. Tell the truth by declaring a climate and ecological emergency, working with other institutions to communicate the urgency for change.

* 3. Create and be led by a national Citizens’ Assembly on climate and ecological justice.

XR was supported by the Guardian newspaper and its columnists, including George Monbiot and Owen Jones. Labour Party Shadow Chancellor John McDonnell, reacting to a speech by Bank of England Governor Mark Carney in which Carney said the banks faced an existential risk from global warming, tweeted, “Mark Carney’s intervention is breakthrough moment. In addition to rewriting government spending criteria, we’ll now consult on changing the Bank of England’s mandate to reflect the climate change emergency highlighted by #ExtinctionRebellion Rebellion demo.”

On the day’s events, protester Finbarr told a World Socialist Web Site reporter: “I agree climate change is probably the worst catastrophe facing mankind. People are showing they are fed up with capitalism and want to do something about it.

“But I am worried about the tactics being used by Extinction Rebellion. They are talking about assemblies, but how are they going to operate? I was involved with the Occupy London movement in 2011 and we had a lot of stuff from self-appointed people who came from nowhere to spout on about grass roots democracy, horizontalism and assemblies. But what happened? People should ask themselves what happened to Occupy.”

Despite ever more urgent scientific warnings, international emissions agreements, global warming targets and protocols are ignored by governments and corporations alike. Yet XR continues to claim that local and national governments and business leaders can be pressured into making piecemeal changes that will alleviate environmental collapse.

In regard to XR, the WSWS has stated: “Only the most extraordinary, rationally planned mobilisation of humanity’s immense productive, technical and scientific capacities can hope to overcome the challenges of rapidly rising sea levels, accelerating CO2 emissions, loss of biodiversity, collapse of food chains and desertification. But production under capitalism is directed solely to expand the private wealth of billionaires, regardless of the social or environmental cost.

“Moreover, climate change by its very nature demands a global response in which production is subordinated to the needs of the world’s working population. But the world is divided into competing nation states, each dominated by the selfish interests of rival groups of super-rich profiteers. Each continually seeks strategic trade and military advantage over its rivals in the struggle to dominate the world’s market and resources, and each continually seeks new means of extracting more from the working class. As it has twice in the 20th century, this ferocious conflict ends ultimately in world war, threatening the nuclear destruction of the planet.”

“Climate change, therefore, confronts humanity with the need for the socialist reorganisation of society on a world scale and the abolition of the nation-state system.”