A key aspect of our work over the past decade has been to challenge the secrecy that surround the use of armed drones. The Pentagon and the Ministry of Defence (MoD) insist that many aspects of these operations must remain secret in order to protect lives and national security.  And in some cases, that is no doubt true. However, it is also without question that some of the secrecy that surrounds the use of drones is to enable these systems to be used without awkward and difficult questions being asked by parliamentarians, press and the public.

END_OF_DOCUMENT_TOKEN_TO_BE_REPLACED

Behind the scenes, the UK is developing a range of military autonomous systems. Image: Crown Copyright

In November 2018 Drone Wars UK published ‘Off The Leash’, an in-depth research report outlining how the Ministry of Defence (MoD) was actively supporting research into technology to support the development of armed autonomous drones despite the government’s public claims that it “does not possess fully autonomous weapons and has no intention of developing them”.  This article provides an update on developments which have taken place in this field since our report was published, looking both at specific technology projects as well as developments on the UK’s policy position on Lethal Autonomous Weapons Systems (LAWS).

END_OF_DOCUMENT_TOKEN_TO_BE_REPLACED

Examination of UK air strike data from the past two years shows that British unmanned drones have been used far more often to attack individuals on the ground in Iraq and Syria than the UK’s other strike aircraft, the Tornado or the Typhoon.

END_OF_DOCUMENT_TOKEN_TO_BE_REPLACED

President Donald Trump, who has stepped up the use of drones in Somalia and other areas, recently revoked a requirement for U.S. intelligence officials to give public reports listing the number of civilians killed in drone strikes and other attacks on terrorist targets outside war zones – a practice which was part of an accountability effort to minimize civilian deaths from drone strikes. The House Intelligence Committee Chairman Adam Schiff, however, has announced that he will seek to reimpose the intelligence community’s reporting on civilian casualties through a provision in this year’s Intelligence Authorization Act.

END_OF_DOCUMENT_TOKEN_TO_BE_REPLACED

Over the past two weeks, campaigners have been in New York taking part in meetings at the UN urging diplomats to control the proliferation and use of armed drones.  Drone Wars UK was one of the more than 50 organisations signing a joint statement released to coincide with the meetings.  Here in the UK, despite freezing wet weather, campaigners also held a protest at RAF Waddington in Lincolnshire calling for an end to the growing use of armed drones.

END_OF_DOCUMENT_TOKEN_TO_BE_REPLACED 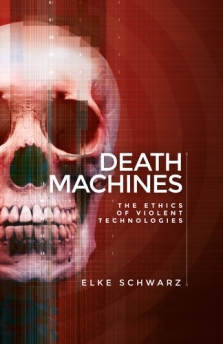 The ethical concerns raised by Elke Schwarz in her new book, Death Machines: The Ethics of Violent Technologies, help situate the use of armed drones in a deeper discussion of our modern political landscape and point to the issues that must be addressed through substantial ethical reasoning. For those not familiar with political theory and ethics, this book is at times quite dense. Nonetheless, it is essential reading for those working with or on the issue of drones, autonomy and AI to engage with the ever-increasing use of violent technologies, regarding both the physical death they inflict and the ethical death in the wake of their use.

END_OF_DOCUMENT_TOKEN_TO_BE_REPLACED

The Pentagon has told Congress it estimates that nearly 500 civilians were killed as a result of US military actions in the first year of the Trump administration. According to CNN: “(The Department of Defense) assesses that there are credible reports of approximately 499 civilians killed and approximately 169 civilians injured during 2017” as a result of military operations in Iraq and Syria targeting ISIS, operations in Afghanistan targeting the Taliban and ISIS, and operations in Yemen against al Qaeda in the Arabian Peninsula and ISIS.

END_OF_DOCUMENT_TOKEN_TO_BE_REPLACED

Britain is at war with more than 1600 airstrikes in Syria and Iraq. Deborah Haynes, Defence Editor of the Times reports the killing of a civilian by RAF drone in Syria.

END_OF_DOCUMENT_TOKEN_TO_BE_REPLACED

The residents of Iowa City, Iowa have moved to ban drones, red-light cameras and license plate readers in what is likely the most thorough action taken by a town yet against modern surveillance technologies.

END_OF_DOCUMENT_TOKEN_TO_BE_REPLACED

Al Jazeera: It is widely suspected that the US has used drones frequently to target al-Qaeda and Taliban

Unmanned aerial vehicles (UAV’s) or drones are remote-controlled aircraft without people onboard, which can carry and utilize missiles. It is widely suspected that the US has used drones frequently to target al-Qaeda and Taliban fighters in Afghanistan and Pakistan, although Washington has never admitted nor denied it. But in alleged UVA attacks targeting the fighters, collateral damage has reportedly claimed the lives of many civilians. As the US plans to order more drones to add to the more than 7000 they already have, there is still no legal framework or set of standards for how to use the new technology. John Terret reports from Washington, where a US congressional committee has been held to debate the legality of UAV’s usage in conflicts.

US drone strikes against suspected terrorists in Afghanistan and Pakistan could be breaking international laws against summary executions, the UN’s top investigator of such crimes said Tuesday.

‘The problem with the United States is that it is making an increased use of drones/Predators (which are) particularly prominently used now in relation to Pakistan and Afghanistan,’ UN Special Rapporteur on Extrajudicial Executions Philip Alston told a press conference.

US strikes with remote-controlled aircraft against Al-Qaeda and Taliban targets in Afghanistan and northwestern Pakistan have often resulted in civilian deaths and drawn bitter criticism from local populations.

‘The onus is really on the United States government to reveal more about the ways in which it makes sure that arbitrary extrajudicial executions aren’t in fact being carried out through the use of these weapons,’ he added.

Alston said he presented a report on the matter to the UN General Assembly.

He urged the United States to be more forthright about how and when it uses drone aircraft, something about which the US Defense Department and Central Intelligence Agency (CIA) usually keep silent.

‘We need the United States to be more up front and say, ‘OK, we’re willing to discuss some aspects of this program,’ otherwise you have the really problematic bottom line that the CIA is running a program that is killing significant numbers of people and there is absolutely no accountability in terms of the relevant international laws,’ Alston said.

Since August 2008, around 70 strikes by unmanned aircraft have killed close to 600 people in northwestern Pakistan.

‘I would like to know the legal basis upon which the United States is operating, in other words… who is running the program, what accountability mechanisms are in place in relation to that,’ Alston said.

‘Secondly, what precautions the United States is taking to ensure that these weapons are used strictly for purposes consistent with international humanitarian law.

‘Third, what sort of review mechanism is there to evaluate when these weapons have been used? Those are the issues I’d like to see addressed,’ the UN official said.”