Poster for A Compassionate Spy showing photo of Ted Hall. K-19 was his badge number at Los Alamos. [Source: imdb.com]

Controversial New Documentary Reveals How A Teenage Army Physicist Named Ted Hall Saved The Russian People From A Treacherous U.S. Sneak Attack In 1950-51—And May Well Have Prevented A Global Nuclear Holocaust

END_OF_DOCUMENT_TOKEN_TO_BE_REPLACED

You know things are bad—and going to get worse—when a mainstream newspaper like the Washington Post invokes the Mohr:

What Karl Marx once called “the reserve army of the unemployed” will probably keep wage growth in check as the recovery inches forward.

END_OF_DOCUMENT_TOKEN_TO_BE_REPLACED

If the NATO summit this week marking the 70th anniversary of its foundation in 1949 was meant to be a resounding celebration, it backfired spectacularly, more as a resounding farce. Amid all the pomp and ceremony afforded by an official reception at Buckingham Palace, hosted by the British Queen, the two-day gathering descended into squabbling, sneering and back-stabbing.
END_OF_DOCUMENT_TOKEN_TO_BE_REPLACED

END_OF_DOCUMENT_TOKEN_TO_BE_REPLACED

The statement published by WikiLeaks on Wednesday explains how Sarah Harrison helped Snowden successfully get Russian temporary asylum, which he received on August 1, despite “substantial pressure from the United States.”  END_OF_DOCUMENT_TOKEN_TO_BE_REPLACED

Britain is an extreme oddity regarding privatisation: nowhere else in the advanced world is there such a willingness to sell everything that isn’t nailed down. Time and again the British public is ripped off and sold out by its leaders. END_OF_DOCUMENT_TOKEN_TO_BE_REPLACED

Ann Jones’ new book, They Were Soldiers: How the Wounded Return from America’s Wars — The Untold Story, is devastating, and almost incomprehensibly so when one considers that virtually all of the death and destruction in U.S. wars is on the other side. Statistically, what happens to U.S. troops is almost nothing.  In human terms, it’s overwhelming.

END_OF_DOCUMENT_TOKEN_TO_BE_REPLACED

In a retrospective this summer, “Seeing Red,” the British Film Institute celebrated the work of veteran film and television producer Tony Garnett. The BFI described Garnett as one of television’s “most influential figures,” who “produced and fostered a succession of provocative, radical and sometimes incendiary dramas.”

END_OF_DOCUMENT_TOKEN_TO_BE_REPLACED

Who is Jeh Johnson, and Why Should Black People Be Hanging Our leads in Shame?

The Department of Homeland Security is a secretive, lawless, largely privatized police and surveillance agency, with its own prisons and soon, its own drones. Now it’s headed by a black man, a progressive Democrat, a Morehouse man & Pentagon lawyer who invokes Dr. King as patron saint for murderous US global empire, a certifiable member of the black misleadership class. END_OF_DOCUMENT_TOKEN_TO_BE_REPLACED

The map below comes from the Nuclear Emergency Tracking Center. It shows that radiation levels at radiation monitoring stations all over the country are elevated. As you will notice, this is particularly true along the west coast of the United States. Every single day, 300 tons of radioactive water from Fukushima enters the Pacific Ocean. That means that the total amount of radioactive material released from Fukushima is constantly increasing, and it is steadily building up in our food chain. Ultimately, all of this nuclear radiation will outlive all of us by a very wide margin. END_OF_DOCUMENT_TOKEN_TO_BE_REPLACED

The great European revolutionary epoch of the post war period from the 1910s through the 1920s provides endless biographical material revealing all that is best and worst in the human material of revolution, the Russians having been the most studied, providing shelves of biographies of Lenin, Bukharin, Stalin and Trotsky. END_OF_DOCUMENT_TOKEN_TO_BE_REPLACED

Vietnamese Gen. Vo Nguyen Giap, who helped defeat Japan, then France, then the United States in a 35-year war for national independence, died in Hanoi on October 4 at the age of 102. He had been ailing and living in a military hospital for the last four years.

END_OF_DOCUMENT_TOKEN_TO_BE_REPLACED 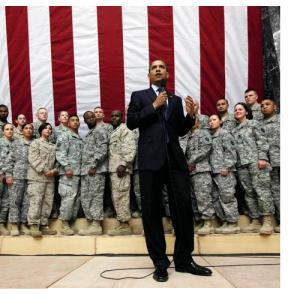 In the first part of this essay series on ‘Empire Under Obama,’ I will aim to establish some fundamental premises of modern imperialism, or what is often referred to as ‘international relations,’ ‘geopolitics’, or ‘foreign policy.’ Specifically, I will refer to George Orwell’s writing on ‘political language’ in order to provide a context in which the discourse of imperialism may take place out in the open with very little comprehension on the part of the public which consumes the information; and further, to draw upon Noam Chomsky’s suggestion of understanding international relations as the application of ‘Mafia Principles’ to foreign policy. This part provides some background on these issues, and future parts to this essay series will be examining the manifestation of empire in recent years.

END_OF_DOCUMENT_TOKEN_TO_BE_REPLACED

In 2006 the U.S. was at war in Iraq. Some of the enemy forces it very much struggled to fight against were coming in through Syria. The same year Israel lost a war against Hizbullah. Its armored forces were ambushed whenever they tried to push deeper into Lebanon while Hizbullah managed to continuously fire rockets against Israeli army position and cities. Hizbullah receives supply for its missile force from Syria and from Iran through Syria. END_OF_DOCUMENT_TOKEN_TO_BE_REPLACED

Laurent Fabius: Disgracing France and confirming once again that social democrats are bankable traitors. Public opinion is overwhelmingly against war in France but France is no longer a democracy, either.

With almost pathological haste, Western governments have moved to undermine Russia’s sensible proposal for Syria to hand over its chemical stores, thus avoiding the needless carnage being proposed by the United States. In an interview with CBS Evening News anchor Scott Pelley not hours after the proposal gained the tentative acceptance of the Syrians, Obama grudgingly conceded it was a positive development, but quickly added that it would never have been possible without “a credible military threat,” and sounded all the appropriate reservations. Hillary Clinton also warned that the initiative, however hypothetically, cannot be, “another excuse for delay or obstruction.”

END_OF_DOCUMENT_TOKEN_TO_BE_REPLACED

The public doesn’t seem to support going to war in Syria–but some high-profile  Sunday morning TV journalists are either declaring their support for the war, or professing faith in the case for going to war.

END_OF_DOCUMENT_TOKEN_TO_BE_REPLACED

After a stunning geopolitical move by Russia and Syria involving the surrendering of Syria’s chemical weapons arsenal, the special interests seeking war have been forced to adjust their rhetoric and timetable around what is now a quickly dissolving casus belli.

END_OF_DOCUMENT_TOKEN_TO_BE_REPLACED

Launching a war in slow motion against a faraway country is never a smart thing to do, but it can have its advantages, too, in case the need arises to rein in the war on reflection before it gets under way. That seems to be happening in the case of the United States’ planned strike on Syria.

END_OF_DOCUMENT_TOKEN_TO_BE_REPLACED

Both the United States and France are busy with preparations for the bombing of Syria, although such action corresponds to no strategic objective for either state. Russia and the Axis of Resistance are therefore preparing their riposte. The major difficulty consists in transforming this agression into a regional war while avoiding the Third, (and final?) World War. Whatever happens, if they engage in war, the Western world will have to deal with a long and wide-ranging conflict like nothing they’ve experienced since Vietnam.