Emails have emerged revealing how the controversial Syrian activist group the White Helmets tried to lobby Pink Floyd co-founder Roger Waters with Saudi money. The revelations have been published on Max Blumenthal’s project.

In an email from October 2016, Roger Waters is invited to a fundraiser organized by Saudi billionaire Hani Farsi to honor the work of the White helmets. In it, he is also encouraged to watch a documentary about the group.

And it didn’t stop there – just days before his recent concert in Barcelona, Waters was contacted by a French journalist working for the White Helmets. The reporter asked Waters for a few moments on stage to deliver a message to the children of Syria.

Rogers did not respond to either email, according to journalist Max Blumenthal, who obtained the messages. Instead of giving the stage to the White Helmets during his Barcelona concert, Waters denounced the organization.

“The White Helmets is a fake organization that exists only to create propaganda for jihadists and terrorists. That’s my belief. We have opposing beliefs,” he said. “If we were to listen to the propaganda of the White Helmets and others, we would be encouraged to encourage our governments to start dropping bombs on people in Syria. This would be a mistake of monumental proportions for us as human beings,” he added. 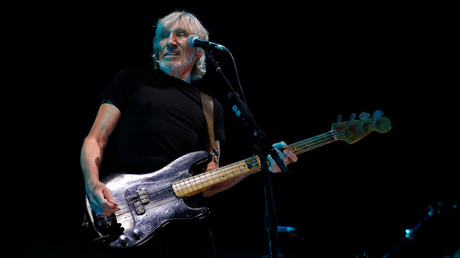 Blumenthal told RT that the White Helmets “are operating on the ground alongside Al-Qaeda and their allies, and these are just documented facts. For the first time, a mainstream figure on an international stage on the eve of war has validated what we’ve been reporting and he did so in Barcelona to loud cheers from the audience that was opposed to a war waged against international law, without the approval of the parliaments of the governments that launched the war.

“And the White Helmets were the only source that these governments were relying on to justify their attacks. This was an enormously rousing speech by Roger Waters that has legitimized the journalism that we’ve been so mercilessly attacked for publishing and it’s forced those who attacked us and accused of being conspiracists to actually look at what we’ve reported. And they really have nothing to say back to us, they can’t simply dismiss it as a Kremlin conspiracy anymore, when Roger Waters is saying this.”

Speaking to Blumenthal’s Grayzone Project, Waters urged celebrities who had already endorsed the White Helmets to reconsider their support for the group. “I don’t blame them for having bought in to it. On the face of it, it felt plausible that the White Helmets were just good people doing good things. But now we know they’re trying to encourage the West to drops bombs and missiles illegally in Syria.”

Waters told Blumenthal that he had concluded that the Syria Campaign was “a malign organization funded by people who hope to gain from the ouster of Bashar Assad – because once he’s gone, it will be open season for the stealing of the assets of a failed state.”

The White Helmets was the first group to report on the alleged chemical attack in Douma. Although it’s been widely praised in the West for its rescue work, its members have repeatedly been accused of having links to extremist groups.

Blumenthal said the emails vindicated journalists such as himself, who have questioned the White Helmets’ image as a humanitarian ‘civil defense’ organization. “For years, journalists including myself have been reporting on the danger of the White Helmets, how this Western-funded organization, funded by Western and Gulf governments, has basically been an instrument of encouraging regime change,” Blumenthal told RT. “It’s not just a group of average volunteer rescue workers, it’s an international influence organization whose representatives show up in Congress to lobby for no-fly zones and sanctions on Syria, as well as parliaments across Europe.”