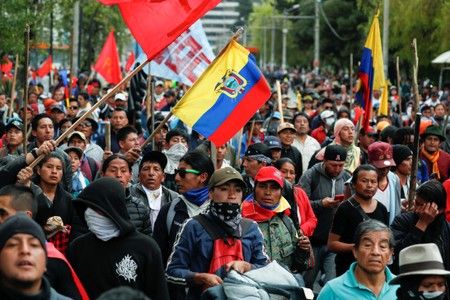 Thousands of people are demonstrating in the capital city over the last seven days to protest against the neoliberal economic measures, particularly elimination of state fuel subsidies announced by President Lenin Moreno last week.

Massive protests have also erupted across the country.

The fuel prices more than doubled, taking a disproportionate toll on poor and indigenous communities.

The demonstrators – many of them indigenous peoples – met a forceful police response, including tear gas, clubs and armored vehicles, with officers charging the protesters on horseback and motorbikes.

The streets in the capital city looked like a war zone with rocks, bottles and tear gas cartridges everywhere.

The parliament building was left vacant by Moreno’s government as the government has already fled to another city in the face of heavy demonstrations in the capital city.

Scores of protesters on Tuesday waved flags at the parliament chamber’s podium while others chanted slogans against President Moreno.

Moreno has come under fire over a series of spending cuts and other austerity moves linked to an IMF loan deal signed in March.

Though police were able to keep most protesters away from the parliament with tear gas, several dozens of protesters broke their way past security and entered the chamber, which was empty after authorities evacuated government buildings in the capital city on Monday.

The protesters held a brief demonstration before pulling back. Later, police regained control of the building.

A police presence was in the areas surrounding the national assembly, where security forces clashed with demonstrators wielding stones, sticks and other improvised weapons.

The police – some on horseback, motorbike, or in armored vehicles – responded with tear gas and clubs.

Many of the demonstrators come from poor and indigenous communities across Ecuador, where the spending cuts have taken the highest toll, particularly the elimination of fuel subsidies.

As people continue to stream into Quito to take part in the demonstrations, the protesters are gearing up for a general strike on Wednesday, hoping to compel the government to act on demands to reconsider the austerity measures.

The protesting people had planned to confront the president and hold a dialogue at some point during the protests, but Moreno relocated the seat of government to Guayaquil and fled there late on Monday.

In a national television address on Monday evening, the president announced that he was moving the government’s seat to Guayaquil, a city which has been the traditional bastion of the far-right and is located near the navy’s main barracks.

Accompanied by the military top brass and the Defense Minister, Moreno indicated that he would not back down on the fuel price hike in the face of what he called a leftist “destabilization” plan.

Quito remained occupied by thousands of demonstrators at dawn on Tuesday. Government activities were not carried out as usual and there was no regular public or private transport up to noon.

Public schools in the country have been closed.

As violent clashes continue between security forces and protestors, thousands of Indigenous peoples marched their way to Quito to join the demonstrations.

People including workers have set up roadblocks in different parts of the country.

Moreno issued Tuesday an Executive Order decreeing the move of the seat of government to Guayaquil.

He also announced a special curfew around strategic government buildings and institutions.

The measures show the grave situation.

This comes as thousands of protesters have set up camp and continued to strike a block away from the National Assembly building in Quito, and around the historic center of the city where the Presidential Palace is located.

The last time such a decree imposing curfew issued was in 1982 in the face of mass protests against neoliberal and austerity measures following the IMF suggested structural reforms.

Although the government had fled to Guayaquil for refuge, Quito remained occupied by thousands of demonstrators at dawn on Tuesday. Activities were not being carried out as usual and there was no regular public or private transport up to noon.

Police confiscated the public radio Pichincha Universal’s transmitting equipment with a warrant, as the state’s prosecutors claim the radio broke the law by “inciting unrest.”

Pichincha Universal denounced its signal has been pulled off the air and equipment was confiscated, as police raided the radio station Tuesday afternoon amid extensive coverage of the anti-government protests.

“We reject this intervention. We’ve just been informing the public. I strongly reject this attitude,” Washington Yepez, one of the radio’s main presenter said, urging “people to come to defend their right for information.”

The radio station belongs to the provincial government of Pichincha and its prefecture.

On March 24 midterm elections, Paola Pabon, of former President Rafael Correa’s political party, won the prefecture, a coincidence that has brought up questions of the motivations behind the signal disruption.

Back on April 4, the state-owned TV station Gamavision cut the power supply to the transmission equipment of the radio.

Protesters moved towards the presidential building

On Monday, as protesters made their way toward Quito’s presidential palace, where Moreno was expected to give an address, officials and journalists were suddenly ejected from the building by the military, reportedly as a security measure.

While security forces continued to build up defenses around the palace, where armored vehicles were stationed.

The president also slammed the protests as a “coup attempt” carried out by “corrupt” lawmakers affiliated with his predecessor and one-time ally, Rafael Correa and Venezuela’s Nicolas Maduro.

Despite the crackdown, the protests show no sign of fading.

Indigenous groups said: around 20,000 more demonstrators arrived in Quito by Tuesday. Many of them traveled by trucks from southern parts of the country to partake in the protests.

Videos have appeared on social media showing throngs of protesters as they marched toward the city.

According to official figures, over 510 protesters have been arrested by Monday. However, the number of injured and dead has not been announced yet, although social media users have reported at least three people killed as a result of demonstration-related events.

The new economic measures come in preparation for a $4.2 billion loan deal with the IMF approved in March.

The government of the southern province of Azuay, near the city of Cuenca, informed that Raul Chilpe died Saturday.

Chilpe was in a protest march while hit by an unknown car that tried to avoid the blockage set up by protesters.

UN calls on Ecuador to respect citizens’ right to protest

The Office of the UN High Commissioner for Human Rights (OHCHR) Regional Office for South America, issued Monday a statement to urge Ecuadorean authorities to respect the right of the citizens to demonstrate peacefully.

“By safeguarding the right to peaceful demonstration, the police have a duty to identify people who act with violence to isolate them from other protesters. The acts of violence or crimes committed by some people should not be attributed to others whose behavior is peaceful,” the statement read.

Warning about the violence of the security forces against demonstrators, the U.N. also rejected “the acts of violence committed by other parties including attacks on people, destruction of public and private property, among others damages.”

Spokesperson for the UN Secretary-General Antonio Guterres, Stephane Dujarric expressed the U.N. chief’s support to the OHCHR statement and indicated that the authorities in charge of maintaining public order must guarantee the right of all persons to demonstrate in peace without risking their lives.