As we wait impatiently while the Brits go through the interminable travail of Brexit, let us have a look at who they are. Not directly in a social, cultural or political sense, but by reviewing the data on UK employment. Work gives a foundation for people’s daily lives and will, in turn, have an impact on society, culture and politics. The employment numbers challenge the conceptions of many, especially those with a narrow ‘industrial’ view of the British working class. They also highlight that a surprising number of people, for various reasons, are not working at all, and that UK residents originally from other European Union countries are more likely to be employed than indigenous Brits. END_OF_DOCUMENT_TOKEN_TO_BE_REPLACED

Up In Smoke: The Neocon Assault on Syria Is Finally Over

And oh by your way, there was no betrayal, either. Continue

Contrary to erroneous info displayed on Eventbrite, there are still seats available for BAR’s 13th Anniversary Celebration , Saturday, Oct 26, at the People’s Forum in New York City.
JUST SHOW UP AT THE DOOR AT 6pm, AND YOU’LL BE WELCOMED 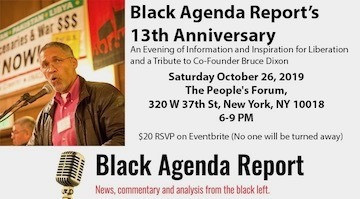 Every year presents new challenges to those struggling for human liberation. For Black Agenda Report, the essential task remains the same as when we published our first issue, on October 26, 2006: to sustain a radical, Black-led publication that can effectively intervene in the great debates of our time. We believe BAR has helped shape the Black Left political debate in this turbulent era of late stage, imperial capitalism – a period of economic catastrophe for Black and poor Americans, political disarray among “progressives,” and escalating lawlessness in U.S. foreign policy. Through it all, BAR has steadily increased both our audience and our capabilities, while waging weekly political battle with the ruling Lords of Capital, the ever-conniving “Black Misleadership Class,” and those who would “sheep-dog” the Left into alliance with corporate forces.
END_OF_DOCUMENT_TOKEN_TO_BE_REPLACED

According to the agreement, Turkey’s Operation ‘Peace Spring’ will continue in a limited area between Tell Abyad and Ras al-Ayn with a depth of 32km. Starting from 12:00 October 23, units of the Russian Military Police and the Syrian Army will be deployed along the rest of the Turkish border to the east of the Euphrates. Read more…
END_OF_DOCUMENT_TOKEN_TO_BE_REPLACED 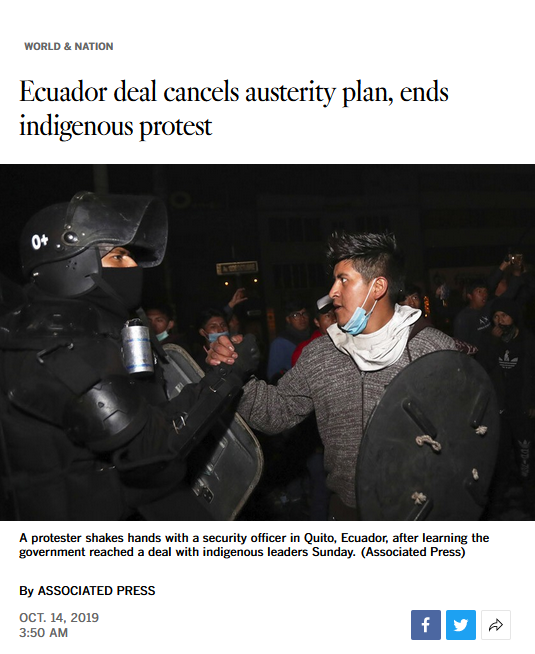 END_OF_DOCUMENT_TOKEN_TO_BE_REPLACED

The Courage Foundation convened a panel of concerned individuals from the fields of disarmament, international law, journalism, military operations, medicine and intelligence in Brussels on October 15th. The panel met with a member of the investigation team from the Organisation for the Prohibition of Chemical Weapons (OPCW), the international chemical watchdog. On this basis the panel issued the following statement: