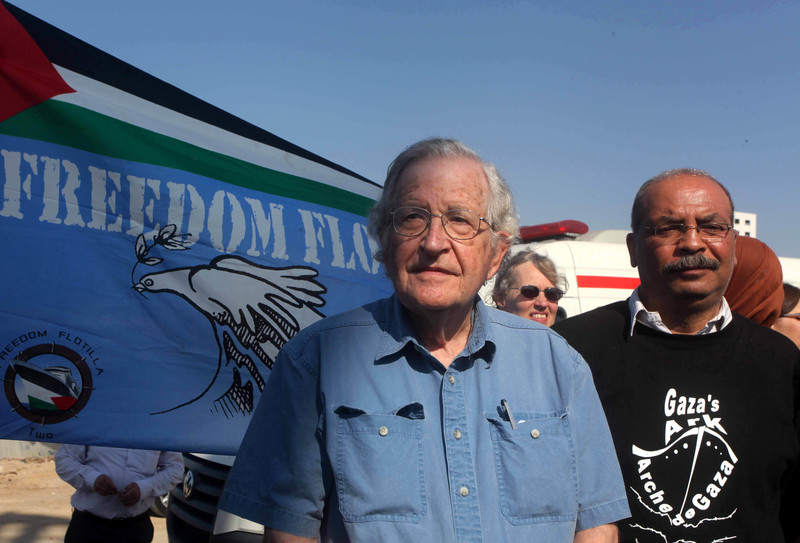 Noam Chomsky has described attempts to limit what may be said at a London book launch as an “utter outrage.” Ashraf Amra APA images

When we first began organizing a launch event for a Noam Chomsky book, we suspected it might be targeted by pro-Israel activists.

After all the book, The Responsibility Of Intellectuals: Reflections by Noam Chomsky and Others after 50 Years, was based on a 2017 conference at University College London (UCL) that had been targeted by such activists.

These activists’ prime concern was with one contributor to both the conference and the book, Jackie Walker. She had been accused by some newspapers of claiming that Jews caused “an African holocaust.”

Significantly, the only evidence cited for this claim came from a Facebook posting. Anyone who looks at the full quotations and context of what Walker wrote will see that she never made such an absurd claim.

One pro-Israel activist did confront Walker at that 2017 conference but she handled the situation calmly and expertly.

And we expected no serious problems at our UCL Press book launch in late October this year.

What we did not expect was for UCL’s managers to present us with a list of quite outrageous restrictions on what could and could not be said at the launch.

One of these restrictions forbade us from implying that “Jews are less vulnerable to discrimination than other minority groups.”

Although this particular topic was never intended to be discussed at the launch, it was clearly absurd to forbid us from suggesting that some minority groups, such as Muslims or Black people, might face worse discrimination than Jewish people in today’s Britain.

Even more absurd was another restriction that said that it was forbidden to suggest that “particular sections of the British Jewish community” might “exaggerate” incidents of anti-Semitism.

To give an example of this within the Jewish community, in May 2016, The Jewish Chronicle published an article titled “The problem is real but also exaggerated.”

Its author Tony Klug argued that the Jewish community should “end the hysteria and restore a sense of proportion” regarding the issue of anti-Semitism in the Labour Party.

A further example can be found in a September 2017 article also published by The Jewish Chronicle. Its author Jonathan Boyd referred to the tendency of some people “to exaggerate the scale” of the problem of anti-Semitism.

Presumably, if they spoke at our UCL book launch, these two academics would be forbidden from repeating their claims, even though The Jewish Chronicle had no problem publishing them.

The absurdity of this situation is only intensified when one considers that it was The Jewish Chronicle that first pressured UCL managers to intervene in our book launch in the first place.

To be totally honest, my initial reaction to UCL’s restrictions was to pretend to accept them and then to trust that the individual who chaired the launch would be intelligent enough not to take them too seriously. Fortunately, various Jewish friends convinced me that if we didn’t stand up to this blatant attack on academic freedom, it might well set a precedent for other events at UCL and beyond.

A number of prominent academics wrote to us condemning the university’s restrictions, including the geneticist Steve Jones, the sociologist Hilary Rose and the human rights lawyer, Geoffrey Bindman. But it was the outrage and uncompromising stance from Noam Chomsky that really convinced us not to back down and to stand up for academic freedom.

Chomsky’s statement was short but astute.

“If I’d been asked, I would have rejected all of these conditions, for two reasons,” he wrote. “First, why bring up anti-Semitism and not Islamophobia, white supremacy and other serious forms of racism? Second, these conditions are an utter outrage.

“Take the first, stating that it would be anti-Semitic for anyone to say or imply that any Jewish group has ever exaggerated incidents of anti-Semitism in the Labour Party or elsewhere. I’m frankly at a loss for words.

“Would it be anti-Arab racism to say that some Arab group has exaggerated incidents of anti-Arab racism? If so, I’m a hardened Islamophobe because I know of such cases and have often said so. And so are all journals and commentators on the Middle East, because such behavior is common – for other nationalist groups as well.

“Why are Jewish groups immune from criticism, alone in the world?

“Beyond that there happens to be solid record of exaggerating incidents of anti-Semitism in Labour. Greg Philo’s recent study documents this in extensive detail.”

No time for complacency

It took a while and required numerous emails from myself and others, but eventually UCL’s managers withdrew their list of restrictions and let the book launch go ahead. An article in Times Higher Education probably also had some effect.

But, despite this victory, this is no time for complacency.

Other universities, such as King’s College London, have already adopted the International Holocaust Remembrance Alliance (IHRA) definition of anti-Semitism. It severely restricts academic freedom, particularly in relation to the subject of Palestine.

And this ongoing censorship campaign can only have been emboldened after Waterstones book chain canceled the Brighton book launch of the study that Chomsky referred to in his statement: Bad News for Labour by Greg Philo and others.

The situation is even worse in the US.

Florida has, for example, recently passed legislation prohibiting student groups that focus “peace or human rights investigation only on Israel.” Similar legislation is being considered elsewhere.

The Republican politician behind the Florida law, Randy Fine, could not have been clearer about the purpose of the legislation. He has written that anti-Semitism will be “treated identically as how racism is treated. Students for Justice in Palestine is now treated in the same way as the Ku Klux Klan.”

Fine’s legislation includes the claim that it is anti-Semitic to draw “comparisons of contemporary Israeli policy to that of the Nazis.” Similar wording also appears in the IHRA definition which, under pressure from the right-wing MPs, the media and the pro-Israel lobby, was last year adopted by the British Labour Party.

Although comparisons of Israel to Nazi Germany can sometimes be ahistorical and even absurd, to suggest that they are always anti-Semitic is, of course, equally absurd.

A friend – who happens to be a son of a Jewish Holocaust survivor – recently compiled a list of Holocaust survivors who had themselves made comparisons between some aspects of Zionism and the Nazis. He came up with a list of nine such survivors, including famous individuals such as Primo Levi and Rudolf Vrba, which I recently published on the Labour Briefing website.

Presumably, all these survivors, if alive today, could be at risk of being banned from King’s College or from the Labour Party.

And, if that wasn’t outrageous enough, these individuals would not just be banned for criticizing Israel but for being anti-Semitic.

Many of us in the Labour Party have been waiting for the ongoing campaign around anti-Semitism to fade away so we can go back to focusing on other important issues. That’s why my initial reaction to the restrictions imposed on our book launch was to ignore them.

But, I’m afraid, we all need to accept that the pro-Israel lobby – and its powerful allies in the media and the right-wing of the Labour Party – will not just fade away.

Rather, they need to be confronted wherever and whenever they attempt to misuse the issue of anti-Semitism in order to immunize the Israeli state from criticism.

Chris Knight is a member of the editorial board of Labour Briefing, a publication based in London. He edited The Responsibility Of Intellectuals: Reflections by Noam Chomsky and Others after 50 Years (2019), along with Nicholas Allott and Neil Smith. A free online version is available at the UCL Press website.