There are first signs that the novel Cor[on]avirus  (nCorV19) epidemic will come to an end within a month or so. An analysis from the Chinese media house Caixin provides the newest numbers (machine translated):

There are some 12.000 recognized infected persons in total. More than 99.9% of all nCorV19 cases are in China. The growth per day is still strong but not exponential. With people now traveling less from, to and within China the epidemic will likely stay contained.

We had documented in an earlier post that neither the infectiousness nor the mortality of the novel Cornoavirus are especially severe. This New York Times graphic also explains that. 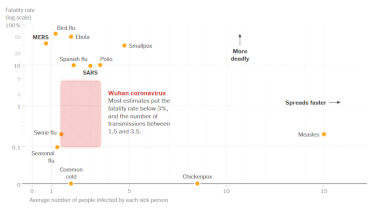 Both numbers are relatively low and here are the first signs that the epidemic is coming to a halt:

At the same time, the growth rate of confirmed cases nationwide has also shown signs of decline.

The declining growth rate proves that the quite extreme quarantine measure China has taken are very effective.

New test kits for the novel coronavirus have been developed and were approved by the Chinese regulator NMPA (vid). These new kits allow to test new patients in just 30 minutes. The people who have a normal flue can now be early on distinguished from those who have caught the virus. 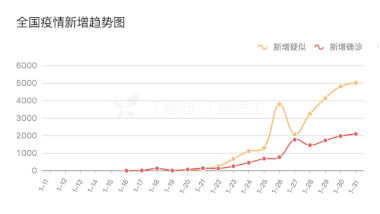 Unless something unforeseen happens we are now coming near to the top of the epidemic. The number of new infections per day may soon start to decrease.

All this is good news. The Global Times is already pushing for new economic measures to increase growth when the epidemic is over.

But there is also bad news in that some people use the epidemic to profit from it.

There have been a number of conspiracy stories which make totally unfounded claims that the virus is a bio weapon or that it escaped from a high security bio lab in Wuhan or was intentionally created or released by Chinese researchers. To use such fantasies to then dox a researcher is irresponsible.

The novel coronavirus is NOT a bioweapon. No military will develop a weapon that kills only 2% of those affected by it. A real bio weapon would also spread much faster.

The Wuhan Institute of Virology and the Wuhan National Biosafety Laboratory are first class medical research institutions with many global cooperation agreements. The laboratory was built after China had been hit by the SARS epidemic. It is the only one in China that has a Bio Safety Level of 4:

BSL-4 labs are rare. However some do exist in a small number of places in the US and around the world. As the highest level of biological safety, a BSL-4 lab consists of work with highly dangerous and exotic microbes. Infections caused by these types of microbes are frequently fatal, and come without treatment or vaccines. Two examples of such microbes include Ebola and Marburg viruses.

In addition to BSL-3 considerations, BSL-4 laboratories have the following containment requirements:

A BSL-4 laboratory is extremely isolated—often located in a separate building or in an isolated and restricted zone of the building. The laboratory also features a dedicated supply and exhaust air, as well as vacuum lines and decontamination systems.

The U.S. has at least 13 such labs. Some of those are used by the military and may be used for bio weapon research. But most are medical research facilities.

The laboratory in Wuhan is specialized on viruses that are typical for the larger area. Some of its leaders are researching why bats are not affected by the viruses that they carry and which can kill people. SARS is known to have emerged from bats. Knowing how a bat’s protection mechanism works could help to create better vaccines.

To jump from those facts to unfounded speculations and to accusing the researchers of having developed the nCorV19 or of spreading it is truly nefarious.

Aside from conspiracy nutters there is one serious suggestion that the novel coronavirus may indeed be something special.

A number of Indian researchers have self-published a paper that claims that the ‘building plan’ of the novel coronavirus, its RNA, contains elements of the HIV-1 Aids virus RNA. The paper was NOT peer reviewed and two researchers in microbiology I have contacted have, like me, doubts about its conclusions.

The paper confirms that the novel coronavirus is related to the virus that caused the SARS epidemic:

Our phylogentic tree of full-length coronaviruses suggests that 2019-nCoV is closely related to SARS CoV [Fig 1]. In addition, other recent studies have linked the 2019-nCoV to SARS CoV.

The researchers then sequenced 6 strings which form a part of the RNA of the novel corona virus. They find that there are four short insertions that distinguish it from the SARS virus:

We then translated the aligned genome and found that these inserts are present in all Wuhan 2019-nCoV viruses except the 2019-nCoV virus of Bat as a host [Fig.S4]. Intrigued by the 4 highly conserved inserts unique to 2019-nCoV we wanted to understand their origin. For this purpose, we used the 2019-nCoV local alignment with each insert as query against all virus genomes and considered hits with 100% sequence coverage. Surprisingly, each of the four inserts aligned with short segments of the Human immunodeficiency Virus-1 (HIV-1) proteins.

The inserts in the 1387 units long string which also occur in HIV-1 have a length of 6 to 8. They are in my estimate too few and too short to make a statistically viable case. But the researchers suggest, without providing a statistical model or calculations, that these are not only significant but probably artificial:

Although, the 4 inserts represent discontiguous short stretches of amino acids in spike glycoprotein of 2019-nCoV, the fact that all three of them share amino acid identity or similarity with HIV-1 gp120 and HIV-1 Gag (among all annotated virus proteins)

suggests that this is not a random fortuitous finding

. In other words, one may sporadically expect a fortuitous match for a stretch of 6-12 contiguous amino acid residues in an unrelated protein.

However, it is unlikely that all 4 inserts in the 2019-nCoV spike glycoprotein fortuitously match with 2 key structural proteins of an unrelated virus (HIV-1).

The math that would support the assertion that it is unlikely that short sequences in parts of nConV19 and HIV-1 amino acid strings are identical is not in the paper. I doubt that the researchers made the necessary calculations.

The researchers then show that the insertions may help to form a part of the binding structure that allows the virus to attach to a host cell. They conclude:

This uncanny similarity of novel inserts in the 2019-nCoV spike protein to HIV-1 gp120 and Gag is unlikely to be fortuitous.

Taken together, our findings suggest unconventional evolution of 2019-nCoV that warrants further investigation.

What those researchers found is interesting. It suggests that something modified the SARS virus RNA by adding four small elements from HIV-1 to create nCorV19. If this is proven correct it might help to find a vaccine against nCorV19.

But the conclusions are in my view too strong and not substantiated enough to make them fully acceptable. While the similarities may not be ‘fortuitous’ they may make evolutionary sense and may have evolved through some natural process which is not ‘unconventional’. If a host (a bat or human) carries the HIV-1 virus and the SARS virus might the replications of those viruses mix?

The presented paper nowhere tests or discusses that hypothesis.

The authors may well deserve more research money for the ‘warranted further investigations’ but that should be decided only after other experts discussed their proposition.