Prior to the elections in Israel/Palestine in September—marred by blatant racism posturing as the “democratic process,” with millions of Palestinians living under varying degrees of Israeli rule unable to vote due to their ethnicity—Prime Minister Benjamin Netanyahu generated headlines for repeatedly pledging to annex nearly a third of the illegally occupied West Bank, in violation of international law, to gain support for his and the Likud party’s reelection (New York Times, 9/10/19).

The Trump administration’s refusal to release details before the September election on presidential son-in-law Jared Kushner’s “Vision for Peace” plan, which would supposedly resolve the enduring conflict between Israelis and Palestinians, was only the latest demonstration of the farce the administration’s “peace plan” has always been for Palestinians.

However, corporate media coverage of “Vision for Peace” continued to transmit the perspective of US official sources, constantly referring unironically to the proposal as a “peace plan,” “peace initiative” or “peace process.” The more difficult and honest approach to reporting on the so-called “peace plan”—by analyzing the plan on its predictable outcomes, rather than its professed objectives—wasn’t taken, despite the media’s own reporting indicating how the plan could never lead to peace.

The Washington Post’s “Kushner Presents Vision of a Middle East at Peace but No Details How to Get There” (6/25/19) tellingly only referred to the Trump administration’s proposal as a “peace plan” in its photo captions, and instead described it as an “economic plan” or a “White House plan” in the text of the article, when it reported on the economic component of Kushner’s plan to raise “$50 billion in regional investment projects over the next decade.” Perhaps this is due to it reporting that the plan has been met with “widespread skepticism” and has already been “rejected by the Palestinian leadership,” who claim that the US can’t be “an honest peace broker after taking several pro-Israel measures,” such as “recognizing the contested city of Jerusalem as Israel’s capital.”

Others have observed how Kushner’s “Peace to Prosperity” plan resembles a real estate developer’s brochure, mentioning “human capital” and “property rights” without mentioning “human rights,” along with buzzwords like “unleashing economic potential” and “enhancing Palestinian governance.” Other pro-Israel measures omitted from the article that make it impossible to accept the US as an honest broker include the Trump administration’s support for Israel’s illegal annexation of the Syrian Golan Heights (FAIR.org, 4/4/19), the closure of the Palestinian diplomatic post in Washington, the transfer of the US embassy to Jerusalem and the slashing of aid to Palestinian refugees (Guardian, 6/25/19). 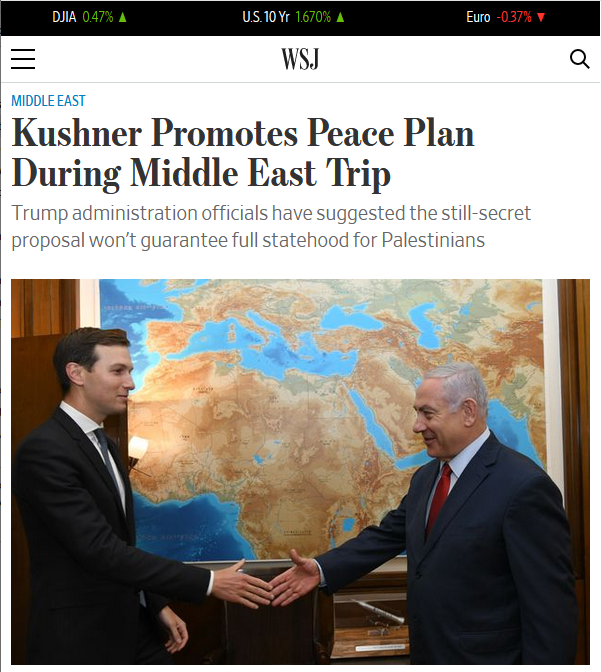 Wall Street Journal (8/1/19) said Jared Kushner was promoting “how a peace plan could benefit the Palestinian economy”—on a trip that involved meeting with no Palestinians.

When the Wall Street Journal (8/1/19) reported on the Kushner team’s meetings in Israel and other Arab countries to promote his “peace plan,” it depicted Kushner as a good-faith negotiator and peacemaker trying to “breathe life into Middle East peace efforts.” This despite reporting that he and his team were snubbing Palestinian leaders and their demands, as Kushner’s team was evading a guarantee of full statehood for Palestinians in favor of a vacuous “autonomy.”

The Journal noted that Kushner didn’t bother meeting with “any Palestinian officials” on this trip, and reported how Palestinian officials have long demanded an independent state on the boundaries that existed before the 1967 war, along with East Jerusalem as its capital and the right of refugees to return to land currently in Israel, which is “generally echoed” by “Arab countries.” That Kushner has never seen the Palestinians as genuine negotiating partners has never been more obvious since he expressed his colonialist dismissal of Palestinians as incapable of self-governance (Axios, 6/2/19).

The Los Angeles Times (6/23/19) insisted on referring to the Trump administration’s “Vision for Peace” as a “peace plan,” “peace process” or “peace initiative” throughout its article, despite quoting statements that contradict such benign motives from sources “privy to Kushner’s work,” like former Israeli Defense minister and “hard-liner” Avigdor Lieberman:

Lieberman said the term “peace process” was irrelevant in the explosive region. “You will never see, at least in the next generation, any peace in the Middle East.”

The LA Times utilized this Newspeak even as it offered the assessment of Daniel Benjamin, the director of Dartmouth College’s John Sloan Dickey Center for International Understanding:

“The Trump administration’s policy for the region is to give the Israelis everything that Netanyahu wants and set up a scenario in which the Palestinians are forced to reject it,” thus providing the White House with “the excuse it needs to continue a basically punitive policy towards the Palestinians,” he said. 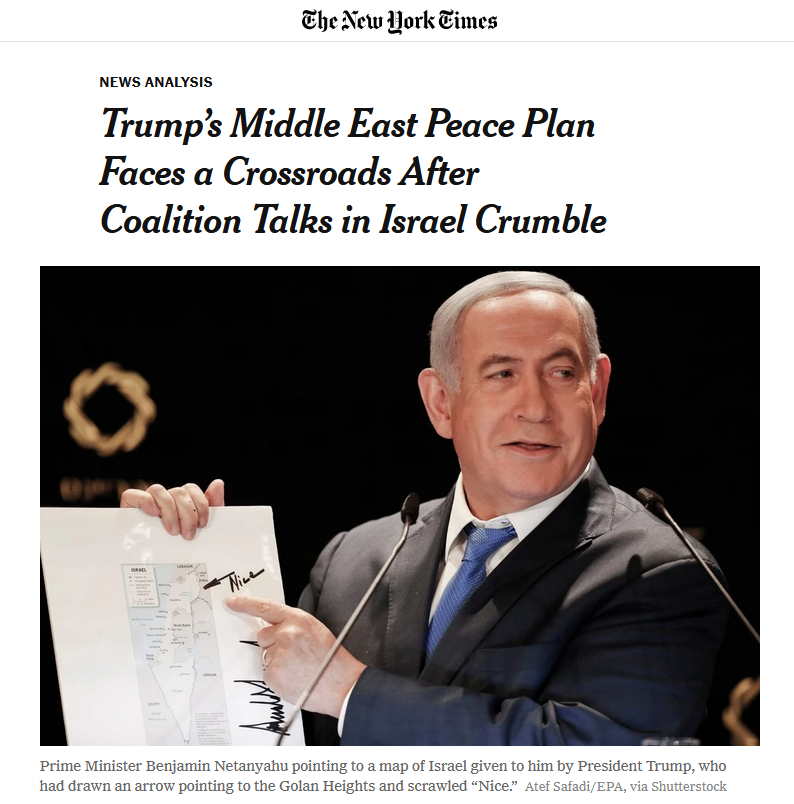 The New York Times (6/1/19) referred oxymoronically to “a staunchly pro-Israel peace plan — one that snuffed out the goal of a two-state solution, for example.”

FAIR has documented how the New York Times has been one of the most credulous media outlets in covering the Israeli/Palestinian conflict (e.g., FAIR.org, 5/16/19, 4/26/19), and its coverage of the Kushner plan is no different. Although the Times’ “Trump to Open Middle East Peace Drive With Economic Incentives” (5/19/19) reported on Netanyahu’s plans to annex part of the West Bank (which would make a two-state solution impossible), and Kushner rejecting an independent Palestinian state, that wouldn’t stop its later reporting from dubbing the Trump administration’s proposal a “peace plan.”

The Times (6/1/19) continued to unironically refer to the US proposal as a “peace plan” or “peace initiative,” even as it observed that Trump planned to “throw his full weight behind Benjamin Netanyahu’s campaign to save his job as prime minister of Israel”—without mentioning that Netanyahu is facing multiple indictments for corruption. It also had no problem analyzing the “political calculus” behind the Trump administration’s plan:

Mr. Trump, eager not to alienate evangelical voters or influential pro-Israel donors like the casino magnate Sheldon Adelson, is unlikely to present a plan that would put Israel or Mr. Netanyahu in an awkward position. For both leaders, therefore, the political calculus will argue for a plan that makes as few demands of Israel as possible.

Corporate media refused many other easy opportunities to discredit the Trump administration’s professed desire for peace. How could a genuine peace agreement be reached when the officials in charge of the plan, like Kushner, US ambassador to Israel David Friedman and former chief negotiator Jason Greenblatt, were all supportive of and bankrolling Israel’s illegal settlements, and have overseen some of the most punitive anti-Palestinian measures in US history (Jacobin, 7/9/19)? How could peace be achieved when the staunchly pro-Israel US plan involved approving Netanyahu’s plan to annex parts of the West Bank considered to be the “food basket” of Palestinians, and rendering a viable Palestinian state impossible by fragmenting it into isolated enclaves within Israel (Intercept, 9/11/19)?

Corporate media also gave scant coverage to the absurdity of a “peace plan” that tries to sell potential investments in Gaza and the West Bank as a “hot IPO,” and doesn’t mention Israel’s illegal occupation strangling the Palestinian economy (CounterPunch, 11/20/15). The UN has found that the Palestinian economy would be at least twice as large if it weren’t for the occupation (Al-Jazeera, 9/9/16), while companies doing business in the settlements contribute to and profit from land confiscations and violations of the rights of Palestinian workers (Al-Jazeera, 1/9/16).

Although there has been vigorous debate between those who support a two-state solution to the Israel/Palestine conflict (Guardian, 11/2/12; Nation, 7/2/14) and a single, multiethnic, democratic state, advocates for a one-state solution continue to be marginalized in the corporate media discussion (FAIR.org, 6/1/18), despite gaining ground among Palestiniansand other people abroad. Rather than treating the denial of democratic rights to Palestinians as a human rights problem, the extension of those rights is portrayed as a threat to Jewish Israelis (FAIR.org, 2/1/19).

Seen from the perspective of those advocating a one-state solution, US and Israeli support for annexing parts of the West Bank is simply an acknowledgment of the reality that Israel/Palestine can only have one government, and a confirmation that democracy is the only path to peace. Whichever path one favors, it should be clear that in media Newspeak, “peace plan” is a propaganda term that only refers to whatever Washington is proposing at any given time.