On Wednesday, thousands of people across Ecuador took to the streets and walked out of their workplaces on the seventh day of a national uprising against the austerity policies of President Lenín Moreno and the IMF. The national strike was coordinated by indigenous groups in conjunction with Ecuador’s biggest trade unions and the student movement, and was heavily repressed by military and police forces. 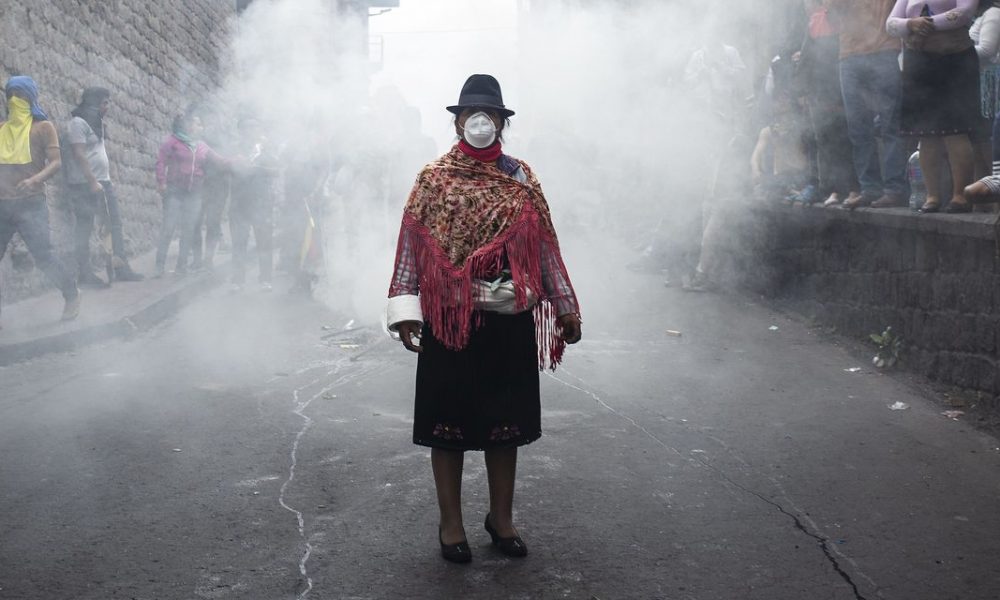 Striking workers and activists vow that they will not call off the national strike that began this Wednesday until Moreno reinstates state oil subsidies and lowers the price of fuel and petrol. Moreno cut the oil subsidies last week as part of an agreement the government negotiated with the IMF for a loan of $4.2 billion in March 2019 in order to combat Ecuador’s worsening economic crisis. The protests are not just about fuel hikes, however. Ever since taking office, Moreno has instituted harsh austerity policies, cutting funding to social programs and wages in the public sector, raising the cost of living, and degrading the living conditions of millions of working-class Ecuadorians across the country.

Moreno asserts that the policies are essential to making a dent in Ecuador’s $3.6 billion national debt, maintaining that everyone must make sacrifices for the good of the country—everyone, that is, except the rich, for whom Moreno has cut wealth taxes and promoted pro-business, anti-worker legislation for the past two years. The uprising currently rocking Ecuador is the culmination of years of frustration with Moreno’s neoliberal rule and foreign meddling. The protests are a direct challenge to the authority of the IMF, which is responsible for austerity, authoritarianism, and violence across the global south and beyond. As Mesias Tatamuez, head of the Workers’ United Front union (FUT), declared in his call for the national strike:

What the government has done is reward the big banks, the capitalists, and punish poor Ecuadoreans… We call on all those against the IMF, which is responsible for this crisis, to join the strike.

In the lead-up to the national mobilization, over 6,000 indigenous protesters (organized in the CONAIE, or Confederation of Indigenous Nations in Ecuador) marched from their communities to Quito, Ecuador’s capital, to join thousands more protesters in demonstrations across the city. They overtook roadblocks constructed and defended by military forces to enter the city and march toward the government palace, setting up camp in front of the palace for rallies and speeches throughout the day on Wednesday. They are demanding an end to the fuel hike, which has hit indigenous communities especially hard, raising the prices of other goods and necessities that must be transported outside of big cities.

In Quito, workers, indigenous groups, and students held rallies and marches throughout the day. The mobilizations that began as protests against the fuel hike have now expanded to a full-scale demand for Moreno’s resignation and a restructuring of economic policies in favor of workers and indigenous communities.

As the people’s demands have intensified, so has the nature of these protests and the state’s response to them. While many demonstrations of union workers and activist groups were taking place peacefully throughout the city, other, more spontaneous protests came into violent conflict with the police and military. Protesters stormed government buildings and commandeered military vehicles, defying the militarization of the city and the government’s calls for order and a return to normalcy in the country.

Demonstrators are protesting despite Moreno’s declaration of a national state of emergency, which institutes an overnight curfew, censors the press, prevents assembly in front of government buildings, and gives the military and police the authority to “handle” the crisis as they see fit; the authorities have essentially been given complete freedom to repress protesters. As a result of Ecuador’s militarization, last week the military entered several indigenous communities, firing tear gas into their homes. In clashes during the strike on Wednesday, protesters armed with homemade weapons were assaulted with tear gas, water cannons, and police batons as they continued to strike for an end to IMF-driven austerity in their country. Last week, 100 people were detained for hours in the basement of the parliament after trying to take over the building. 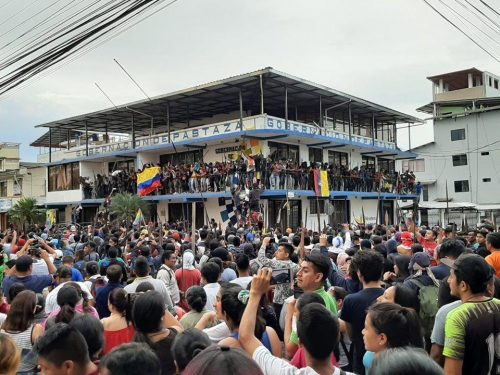 Protesters take over a government building in Pastaza province.

In Quito, as in other areas throughout Ecuador, businesses, schools, and public transportation were effectively shut down on Wednesday, and will continue to be so for the duration of the strike. The country has been effectively paralyzed by the mobilizations. In response, Moreno, who was forced to flee Quito on Monday, returned to the capital city on Wednesday to face the protests and meet with representatives from the groups participating in the demonstrations.

Though the strike is concentrated in Quito and other large cities, demonstrations also continue around the country. Long stretches of highway have been blocked by protesters, disrupting business as usual for companies trying to transport oil across the country. In some provinces, indigenous rights groups have even occupied government buildings and detained police and soldiers who enter their communities illegally. Protesters have even disrupted production in Ecuador’s main oil pipeline, slowing the flow of capitalist profit in the region.

In the city of Guayaquil, where Moreno temporarily fled to avoid the protests, the mayor encouraged merciless repression of the protesters, even encouraging untrained citizens to go into the streets to fight the demonstrators themselves.

In Cuenca, thousands of students took to the streets, calling for an end to cuts in school funding and other austerity measures. They were attacked by the police and military as they marched through the streets.

Where Will the Uprising Go from Here?

Ecuador’s uprising was born from the labor and indigenous movements, and has grown to include other sectors of Ecuadorians fed up with the government’s capitulations to foreign intervention. So far, the leaderships of Ecuador’s trade unions and indigenous groups have proved to be a relatively progressive force in the mobilizations, culminating in Wednesday’s general strike. Their participation has amplified the role that the working class and indigenous populations are playing in these mobilizations, giving the protesters’ social and economic demands a strong class character. As Nelson Erazo, leader of FUT, declared:

In order to push the leaderships of the unions and social movements even further, towards methods of struggle which would truly challenge the relation of forces in the country, the masses must continue to press for unified action between the labor, indigenous, social, and student movements. Furthermore, as Moreno takes up residence again in Quito and meets with the leaders of these organizations, it is imperative that the protesters in the streets hold their leaders’ feet to the fire and refuse to allow them to capitulate to whatever half-measures Moreno proposes.

Despite calls for his resignation and an all-out rebellion in the streets, Moreno promises to hold on to the presidency; however, as Wednesday’s general strike has shown, his position in the country is decidedly weakened. The people are not backing down, and they are hitting the state, the capitalists, and the world’s imperialist powers where it hurts the most: their profits. With workers and indigenous people halting key sectors of capitalist production and fighting the military in the streets, Ecuador’s uprising shows no signs of abating. Out with Moreno! Out with the debt! Out with the IMF!

2 thoughts on “General Strike Against the IMF Shuts Down Ecuador”