Newly appointed shadow chancellor John McDonnell outlined his and Jeremy Corbyn’s new economic prescriptions at the Labour Party’s conference yesterday. It was an exercise in appearing as “sensible” and “safe” as possible to Britain’s ruling class, while still making verbal feints towards the anti-austerity sentiment in the working class that catapulted Corbyn to the leadership of the Labour Party.

END_OF_DOCUMENT_TOKEN_TO_BE_REPLACED

IN-STORE EVENTS
3. ‘Industrial Workers of the World: the union for all workers’
with Dave Pike
END_OF_DOCUMENT_TOKEN_TO_BE_REPLACED

So socialist Jeremy Corbyn, after pressure from the trade union boys who bankroll him, agreed not to make Trident an issue. After all, making nuclear missiles and the submarines that carry them, are jobs for the boys.

“Earlier Mr McCluskey said [the] Unite [trade union] was sympathetic to the argument that Trident nuclear weapons were expensive but added that not renewing the multi-billion pound system would cost some workers their jobs.

“He told a fringe meeting in Brighton: “We won’t be voting in favour of any anti-Trident resolution.The unions who were opposed to Trident are likely to carry the day and that is the way it is, that is the reality.”” – ‘Jeremy Corbyn loses the battle on Trident after trade unionists side with Labour MPs to block the move‘, the Independent, 27 September 2015

END_OF_DOCUMENT_TOKEN_TO_BE_REPLACED

One year on from the historic Scottish independence referendum politics here are utterly changed.

The long dominant Labour Party, which opted to campaign against independence — alongside the Conservatives, loathed by the big majority of Scots voters, and the now virtually demolished Liberal Democrats in the Better Together alliance — reaped the whirlwind at the UK general election in May.

END_OF_DOCUMENT_TOKEN_TO_BE_REPLACED

Intro, 26 September 2015: I wrote this thirteen years ago and on rereading it now I think it deserves a fresh airing given as how things have just gone downhill since then with the total demonisation of the Muslim/Arab in the so-called civilised world. And, it must be me that’s changed because I’m even more appalled today by the repellent racism of Kevin Toolis’s muck in the Observer than when I first read it all those years ago.

This is a kind of followup to the piece I wrote the other day “Let the reader be aware” about the way the media repeats lots of small lies to make one Big Lie, predicated on the approach that swallowing a lot of small lies is a lot easier to do than swallowing one Big One.

END_OF_DOCUMENT_TOKEN_TO_BE_REPLACED

In 1991, U.S. President George H. W. Bush decided to retire almost all the tactical nuclear weapons operated by the US military. He found the short-range weapons militarily useless and burdensome. Twenty-three years have passed since then and here is the news hitting the radar screen – the United States Air Force is going to station 20 new B61-12 nuclear bombs in Germany…

END_OF_DOCUMENT_TOKEN_TO_BE_REPLACED

Reversing The Tide: Cities And Countries Are Rebelling Against Water Privatization, And Winning By Tom Lawson

Private companies have been working to make a profit from water since the 1600s, when the first water companies were established in England and Wales. The first wave of water privatization occurred in the 1800s, and by the mid- to late-19th century, privately owned water utilities were common in Europe, the United States and Latin America, and began to appear in Africa and Asia.

END_OF_DOCUMENT_TOKEN_TO_BE_REPLACED 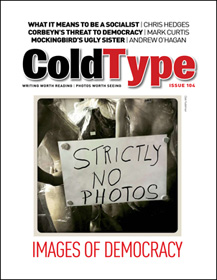 64 PAGES of great writing and photography.

Emphasis this issue is on Jeremy Corbyn, newly-elected leader of Britain’s Labour Party, who is taking his party back to its left wing roots in face of indignant and hysterical opposition from the country’s major newspapers.

END_OF_DOCUMENT_TOKEN_TO_BE_REPLACED

Mosaic of Facts by Miguel Francis-Santiago

On September 11, RT Documentary released a new great movie by an American film-maker Miguel Francis-Santiago, also famous for his works “Crimea for Dummies” and “Donetsk: An American Glance”. In his documentary about information wars Miguel goes for real facts and evidences, trying to find out who stands behind the walls of disinformation and benefits from double standard propaganda, what is the role of government and other politicians in managing world’s leading MSM, why some serious events are being completely misrepresented and why so many obvious crimes such as coup d’etat in Kiev, civil war in Ukraine or MH17 case have never been investigated properly. END_OF_DOCUMENT_TOKEN_TO_BE_REPLACED

SPECIAL: EU Ombudsman investigating secret “trilogue” decision-making but:
The Council challenges the right of the European Ombudsman to conduct an inquiry into secret “trilogues” (in which most EU legislation is decided)
END_OF_DOCUMENT_TOKEN_TO_BE_REPLACED

Black Agenda Report is once again publishing the annual CBC Monitor Report Card. The former all-time worst Black Congressman, David Scott of Georgia, has passed the torch to a new generation of corporate-bought politicians, represented by Alabama’s Terri Sewell – although Scott remains a close second. Overall, the CBC’s drift to the Right continues, with only 12 members scoring 80 or 90 percent. Not one scored 100, due to their deference to Israel.

END_OF_DOCUMENT_TOKEN_TO_BE_REPLACED

As most of the world looks on in horror at Europe’s atrocious response to refugees escaping war and persecution in the Middle East and Africa, some Israeli officials are quietly reveling in the chaos.

Dore Gold, director general of the Israeli foreign ministry, expressed optimism that the refugee influx will shift Europe to the right, making it more sympathetic to Israel’s “security” justification for its ongoing colonization of Palestine. END_OF_DOCUMENT_TOKEN_TO_BE_REPLACED

END_OF_DOCUMENT_TOKEN_TO_BE_REPLACED

Labour values, the NHS and me By Marcus Chown

One victim of the ‘labour purge’ explains why he wanted to vote in Labour’s leadership election – and why he’d supported the National Health Action Party, despite being a lifelong Labour voter.

END_OF_DOCUMENT_TOKEN_TO_BE_REPLACED

There has been some debate about the significance of a warning issued this weekend through Rupert Murdoch’s Sunday Times by a British general that the army would “mutiny” and use “whatever means possible, fair or foul” should the new Labour leader Jeremy Corbyn ever get near 10 Downing Street.

Here is what the general says:

END_OF_DOCUMENT_TOKEN_TO_BE_REPLACED

I ended my last piece with this:

But assuming JC [Jeremy Corbyn] makes all the right calls, could it, a reborn Labour Party lead to a new call for an end to the madness of capitalism and exactly 130 years after [William] Morris made his plea?

Think about it. Transform the Labour Party into a vehicle to promote a new socialist vision? Who is kidding who here?

END_OF_DOCUMENT_TOKEN_TO_BE_REPLACED

US Plans to Partition Iraq and Syria into “Pipeline States”

The Middle East is going through radical reshaping as a result of “Arab Spring” followed by the operation against the Islamic State. It would not be an exaggeration to say that its oil and gas reserves greatly influence the unfolding events. Iraq and Syria have a special role to play in this geopolitical game of the West…

END_OF_DOCUMENT_TOKEN_TO_BE_REPLACED

‘The road to hell is paved with good intentions’

I’m really torn writing this, for on the one hand, Jeremy Corbyn’s (JC) sudden materialisation in the midst of a rampant, Victorian-style imperialist England, like Doctor Who landing in the Tardis, it’s difficult  not to join in the euphoria currently sweeping through what’s left of the left in England  (the current Media Lens has an excellent description of this) and bow down before JC, an almost Christ-like apparition right in the middle of the gangster capitalists in Armani suits who rule us.