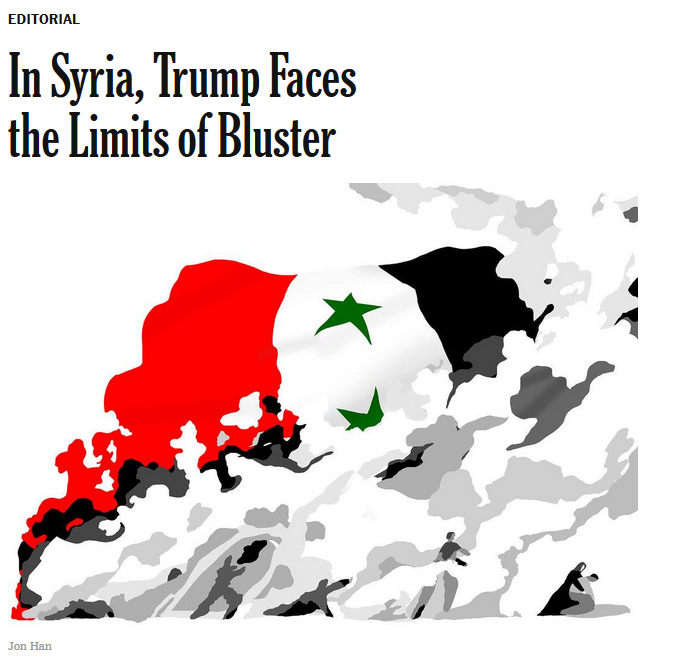 President Donald Trump is threatening to escalate the Syrian war, as are France and the United Kingdom, while Israel apparently bombed Syria three days ago. In this context, major “liberal” media outlets are writing that Trump should attack Syria further.

A New York Times editorial  (4/9/18) used rather weaselly language to call for more war on Syria. “The president should know by now that tough talk without a coherent strategy or follow-through is dangerous,” the paper wrote. Saying that Trump should “follow through” on his “tough talk” is a way of saying that he should carry out his threats against Syria and its allies. In the bizarro world where the paper evidently operates, it’s not dropping bombs that is “dangerous,” even though the bombs are presumably unsafe for the Syrians beneath them. Another air attack on Syria could provoke a wider war in the Middle East, as well as risk direct confrontation with Russia and possibly even China (National Interest, 4/4/18).

The editorial opened by saying that the world had “grown numb to the slaughter of civilians in Syria” until it saw pictures from Douma. The cognitive dissonance is astounding: The paper notes the emotional potency of pictures of dead and wounded Syrians while saying that the US should ratchet up the war in Syria, a move that is guaranteed—as we know from the results of US attacks on Iraq, Libya and Syria itself—to produce victims who are just as dead and injured as the ones in the photos described. 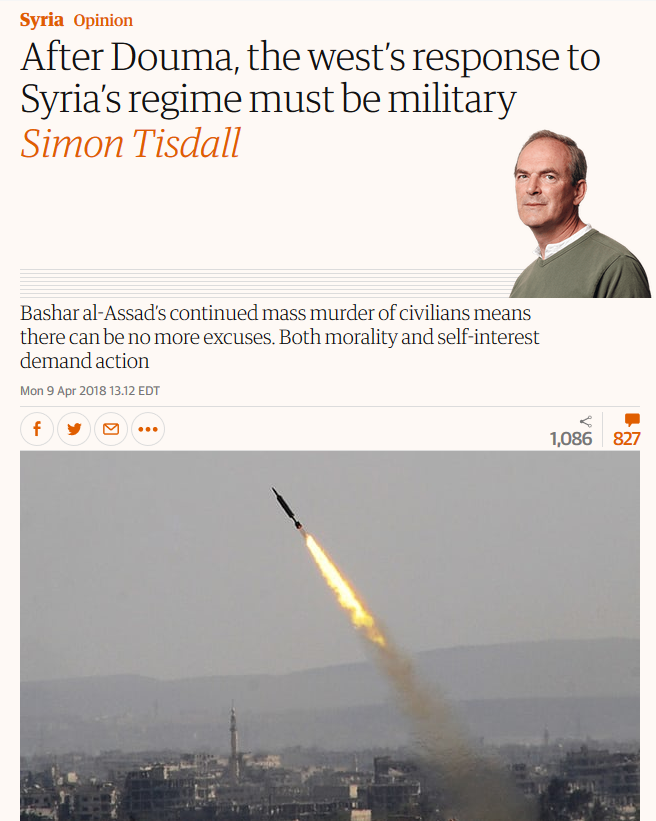 “One feel-good bomb-fest does not a strategy make,” writes the Guardian‘s Simon Tisdall (4/9/18)–a strategy is making your enemies “feel the pain.”

A Guardian article by Simon Tisdall (4/9/18) article suffers from the same affliction. He demands Western military action and explains that this recommendation:

means destroying Assad’s combat planes, bombers, helicopters and ground facilities from the air. It means challenging Assad’s and Russia’s control of Syrian airspace. It means taking out Iranian military bases and batteries in Syria if they are used to prosecute the war. And it means keeping up the pressure when they push back, which they will, until Putin, his Damascene partner-in-war-crimes, and Iran’s cocky Revolutionary Guard commanders get the message, feel the pain, count the escalating cost, and stop trying to kill civilians.

Even if one accepts that the US has the right to do such things, which it doesn’t, such actions cannot be undertaken without killing the very civilians that Tisdall claims he wants to save. The “destroying” and “taking out” he mentions happen through bombing. In Afghanistan, to take one of many possible comparisons, American bombing killed 1,000–1,300 civilians in the first three months alone, and that war will turn 17 in October.

The answer to Tisdall’s question, “Can we no longer distinguish between right and wrong?” is apparently that it is “right” to kill thousands of Syrians and provoke the governments of Syria, Russia and Iran. He laments the “merciless attacks” he attributes to the governments of Syria and Russia, leaving readers to conclude that when America inevitably kills further civilians in Syria, those attacks will be merciful.

The Washington Post (4/9/18) also encourages the US to risk World War III and  kill Syrians in what would almost certainly be enormous numbers, because “President Trump will deal another blow to US global leadership if he does not follow through” on his declaration “that Syria will pay a ‘big price’” for its alleged use of chemical weapons.

The New York Times contends that “if a Russian veto prevents Security Council action, then Mr. Trump needs to work with our allies, through NATO or otherwise.” Wars are illegal under international if they lack UN authorization, but the Times argues that the US should nonetheless ramp up its war on Syria without UN approval. (The reference to NATO incorrectly implies that NATO, a military alliance, has some kind of legal authority.) Yet in the next paragraph, the paper notes that “the use of poison gas,” which it accuses the Syrian government of doing, is “a war crime under international law.” Thus the editorial invokes international law to legitimize an attack on Syria immediately after urging the US to violate international law. 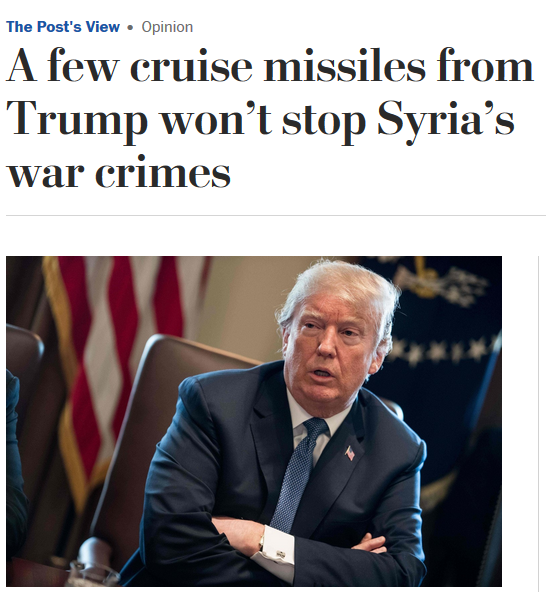 The Washington Post (4/9/18) warns that if Trump doesn’t do what he tweeted, it will “deal another blow to US global leadership.”

These articles rest on the assumption that the United States has a right to control Syria, and should kill Syrians and drive them from their homes to assert that right. The Posteditorial says, “What’s really needed is a concerted strategy for protecting the vital American interests wrapped up in the multi-sided Syrian war.” The paper then wrote that

the reality Mr. Trump has not yet faced is that as long as the dictator he called “Animal Assad” remains in place, Syria’s wars will continue, breeding Islamist terrorists and propelling refugees toward Europe. Mr. Trump does have an advantage that Mr. Obama lacked: Thanks to the capture by US and allied forces of a large part of eastern Syria, the United States has the capacity to stabilize at least part of the country and has leverage in demanding an acceptable outcome to the war.

The first sentence of this paragraph indicates that the Post thinks the only “acceptable outcome to the war” is the overthrow of the Syrian government. The passage suffers not only from its unfounded assumption that the US has a right to decide who governs Syria and to enforce that with arms, but also from its failure to consider what will happen should Washington attempt to do so. An escalation of America’s war on Syria will almost certainly mean that “Syria’s wars will continue,” since the Syrian government and its partners from Iran, Russia, Iraq and Hezbollah can be expected to fight back against US efforts to dominate the country. In that scenario, refugees will indeed be “propel[led] toward Europe,” as they will if the US ousts the Syrian government and ushers in total social collapse, as it did in Libya (FAIR.org, 11/28/17). Thus what the paper purports to be worried about is virtually guaranteed to result from the course it recommends.

The Times, meanwhile, says that:

to have any chance of success, any international retaliatory action must be part of a coherent diplomatic strategy for stabilizing Syria and putting a political settlement in place…. The conflict has allowed Russia, Iran, Turkey and the Islamic State, now degraded by an American-led coalition, to gain a foothold in Syria.

Notably absent from this list of actors are the United States and its proxy Israel, both of whom have “footholds” in Syria: The US controls “about one-third [of Syria], including most of its oil wealth” (New York Times, 3/8/18). Israel, meanwhile, has illegally annexed Syria’s Golan Heights, and has sought to expand its control of Syrian territory throughout the country’s war (FAIR.org, 2/21/18). These “footholds,” however, are supposedly legitimate, as would be any further “foothold” America and its partners would gain from escalating their war on Syria.

This style of coverage—enthusiastic about the moral need for violence but oblivious to its obvious consequences—inhibits the public’s capacity to make sense of the extremely dangerous moment in which we are living.